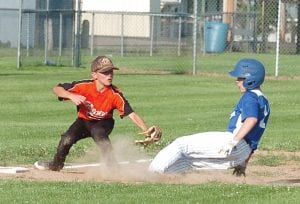 The bats were quiet for the 13-14 Teeners (7-4) at Legion Memorial Field on Friday evening, where they fell 14-1 in a loss to Lemmon.
Unfortunately for Mobridge, the bats of Lemmon were active. In the first inning Lemmon started a two out rally that plated three runners.
In the first inning, Mobridge looked to have started their own two out rally but that was thwarted.
Lemmon didn’t let up after the first inning. In the second inning, they managed to bat around and scored five runs to push their lead to 8-0.
The Lemmon pitcher continued to keep Mobridge off the scoreboar during the third inning. That was the story of the whole game, until the fourth inning, when Blaise Thompson managed to get on base and score the lone Mobridge run of the ballgame.
Lemmon had another big inning in the fifth, when they plated five runs to push their already sizable lead bigger.
For Mobridge, Blaise Thompson was aboard twice during the five-inning game, while Cole Wellner also reached base twice.
Jack Faehnrich and Wyatt Wientjes reached base once for Mobridge.
Up next for the 13-14 Teeners will be the Regional Tournament in Chamberlain.
“It’ll be a test for us,” 13-14 Teeners head coach Pat Davis said.
Part of the reason it will be such an issue will be the number of players the 13-14 Teeners fields. Right now, there are the minimum of nine players on the roster. Since it’s a round-robin tournament and they will play four games in just two days. The usage of pitchers will have to be strategic as there is an allowance of just 95 pitches per starter and 20 for a reliever.
If a starter pitches less than 95 pitches, but more than 75, they are required to rest for four days. If a starter throws less than 75 pitches, he then can throw 20 more pitches in a four-day period.
For relievers, the rule is different. If a pitcher comes on in relief for a starter, they can throw 20 pitches, then they are required to rest for four days. If they throw less than the maximum of 20, they can pitch the next day.