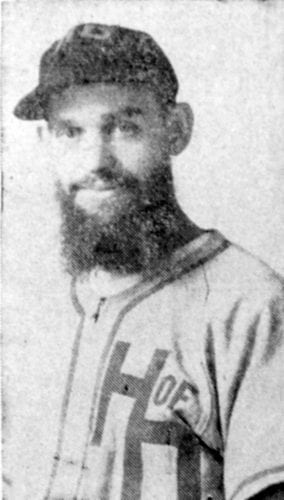 Over 65 years ago, the House of David traveled to face the Mobridge Redbirds during an exhibition game at Legion Memorial Field.

Who exactly was the House of David Baseball team?

For starters, to really understand The House of David team, you should know that they were much more than just a team of nine players.

The House of David was a religious society that had their own cannery, tailor shop, steam laundry, electricity plant and garden. The rules in the House of David community were simple. Celibacy, no smoking, no drinking, no eating meat and no shaving.

Many people started to flock to Benton Harbor to live in the community, and it started to attract tourists.

In 1910, the House of David set up an amusement park for visitors to enjoy.

The popularity around the House of David baseball team spread like wildfire. People in communities, like Mobridge, would flock to the baseball field to watch the bizarre team that sported long hair and grisly beards.

In 1917, the team started traveling as far as Mexico and as wide as Alaska and Hawaii and played an estimated 150 games a year. Essentially, this team was a “barnstormer team,” which is a team that goes around the country playing exhibition games like the Harlem Globetrotters.

The House of David were truly pioneers in the game of baseball. They played the first night game on April 17, 1930 in Independence, Kansas. They became the first team to sign a woman to a professional baseball contract in 1933 when they signed Jackie Mitchell.

In 1936, the team started to tour with the Negro League Champion, Kansas City Monarchs, 11 years before Jackie Robinson broke the color barrier when he suited up for the Brooklyn Dodgers.

Babe Ruth, suited up for House of David and played a game while wearing a fake beard. When the Great Bambino neared the end of his career, he was offered a contract to play with the team. Ruth heavily considered the offer, until his agent said no for him citing his enjoyment of drinking.

Ruth isn’t the only baseball legend connected to the House of David.

Satchel Paige was on the Kansas City Monarchs when they faced off against the House of David. Baseball Hall of Famer, Grover Cleveland Alexander also played for the barnstorming House of David team from 1931 to 1935.

The names on the team when they played at Legion Memorial Field on July 6, 1953, weren’t quite as notable.

Team clown Bobo Nickerson, second baseman and manager George Anderson were some of the notable players mentioned in the 1953 Tribune article.

Catcher Tom Gatts led The House of David in batting averages, with a .426 mark.

The House of David manager and second baseman, George Anderson told Mobridge managers Pat Morrison and Arne Mahlum that the 1953 team was the strongest he had seen, and they owned a record of 22-3 before entering the contest against the Cardinals.

The House of David clobbered the Mobridge Cardinals 13-3 and had two six run innings during the exhibition game at Legion Memorial Field.

Jess Ondell threw for the Cardinals and was marked up for 16 hits and seven runs, while reliever Joe Mueller allowed six runs.