Most people know that 4-H in this part of the country is a valuable experience for area youth that has evolved through the years to include integrating technology and Youth in Action programs.
Children in our area are about to display their year’s work through Achievement Days at special events and county fairs. In this area a number of those events have already taken place in Walworth and Campbell County, including the Specialty Food Competition.
Three young ladies entered items in the June 19 annual Special Foods Contest at St. John’s Lutheran Church in Selby; Callie Mickelson of Herried, Jacqueline Knecht of Selby and Jentry Hubner of Glenham.
“We were fortunate to have Cathy Mickelson of Herreid as our judge for the day,” said Campbell/Walworth County 4-H Youth Advisor Shari Rossow. “Cathy’s four children have actively competed in the 4-H Special Foods Contest for almost 15 years.”
According to Rossow this contest is not just about prepping and cooking a recipe. The competitors also discover the nutrition that is in their actual recipe, learn about nutrients and how they are used by the body, and what quantities are required.
The competitors prep their recipes under the watchful eye of the judge, and after the recipe has been prepared and is ready, a serving is placed at the place setting they have created.
During the competition the judge will ask questions while they are preparing, talk about the place setting, and also ask nutrition questions relating to their recipe. The contest from start to finish lasts up to one and half hours. All three cooks were well prepared according to Rossow and received purple ribbons for their efforts.
Callie Mickelson, the daughter of Gilbert and Cathy Mickelson, comes from a 4-H family and is the last of four Mickelson children for whom 4-H has been a prominent part of their lives.
Callie has competed in 4-H for 13 years. Although Callie won’t be showing livestock this year, she will have entries in the fashion show and talent show.
“I have always done the specialty foods, even as a Clover Bud,” she said. “I grew up watching my older siblings do it and knew I wanted to also.”
Callie said she does a lot of cooking at home and she uses her family to test new recipes.
“My dad will tell me whether or not to try it a second time,” she said.
Callie has always cooked and taken culinary classes in high school. She contemplated going to culinary school before deciding to train to be a nurse.
She decided on pizza for this year’s competition and found this recipe (below). She added a couple of ingredients and played around with it a bit to get it just right.
Jacqueline Knecht from Selby is the daughter of Don and Michelle Knecht. She joined 4-H three years ago.
“4-H has a lot of activities that we can be involved in,” she said. “I like specialty foods because I like to cook.”
Jacqueline said she cooks at home and makes eggs and pancakes and bakes cakes.
She chose crepes for several reasons and was pleased with the way they turned out for the competition.
“When my mom was little they would always have crepes,” she said. “And when we were in Paris we had them with Nutella. That was my inspiration.”
Jacqueline will be entering several categories in the static exhibits in this year’s Achievement Days.
Jentry Hubner is 9 years old and is from Glenham, She is the daughter of Jesse and Jaimie Hubner.
Jentry has been a member of 4-H for two years. She said she joined because she likes to keep busy.
“I like doing things to help people,” she said. “I like having something to do.”
Jentry said some of her favorite 4-H projects include planting flowers and cleaning the ditches and going to Mr. Bob’s afterwards. She also likes going to the nursing home to play piano for the residents there.
She will enter the static exhibits for Achievement Days and will give an illustrated talk. Jentry also enters the shooting events and especially likes the bow competition although she went to the state competition in the BB gun competition.
The following are the recipes for the specialty foods competition. 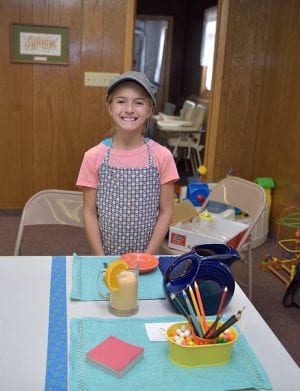 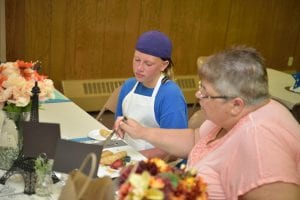 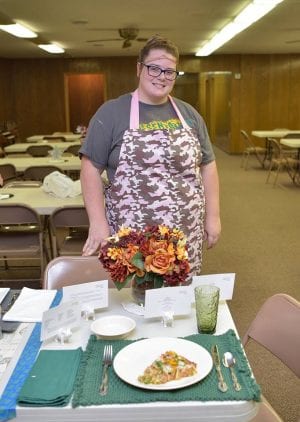