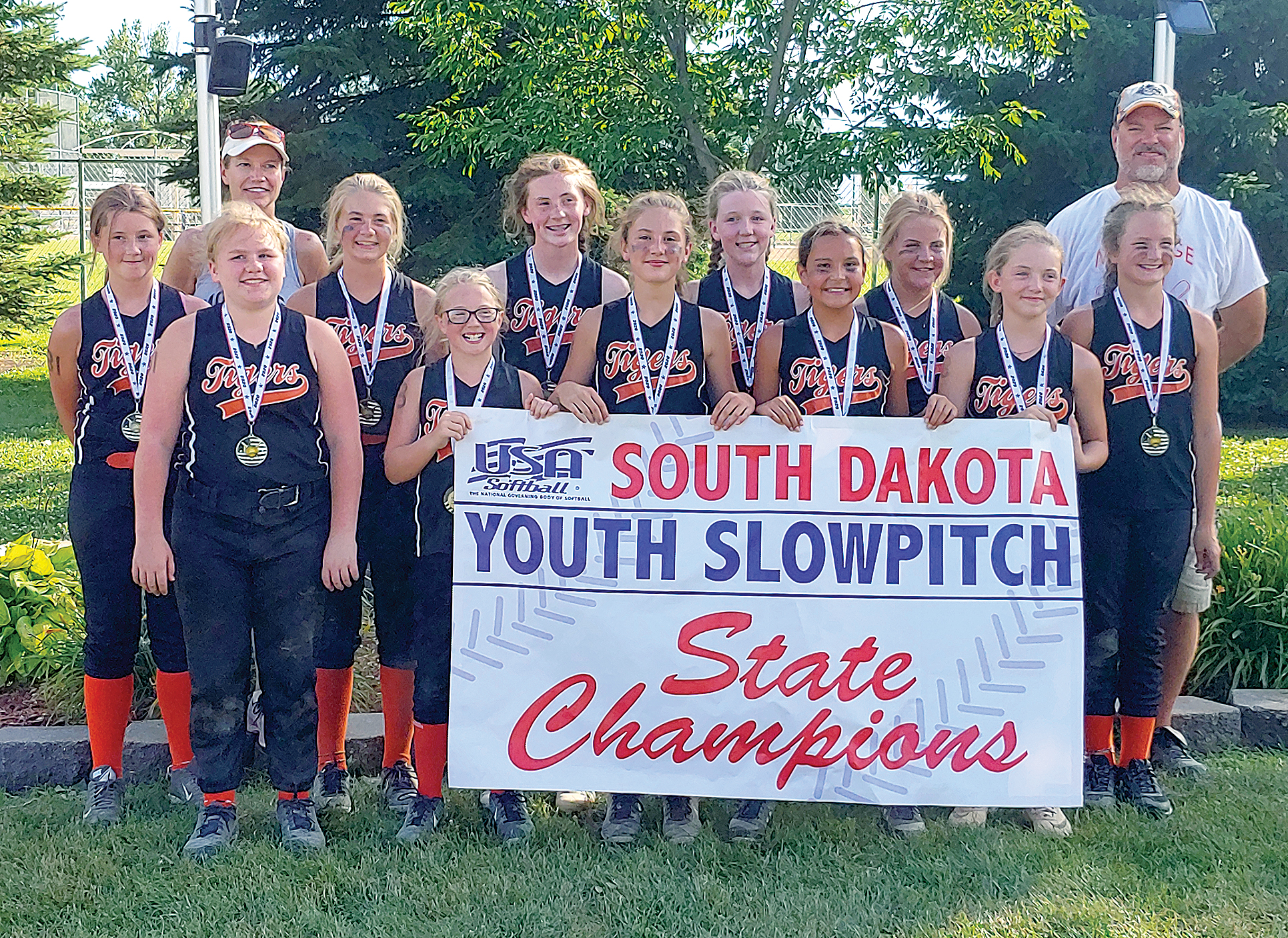 After falling 13-1 to Watertown Service Plus in their fourth game, the Mobridge 12U girls fought back to the championship where they beat Service Plus twice to win the state championship at the USA Softball of SD Youth Slowpitch Girls 12U State Tournament in Watertown on Saturday and Sunday.
The girls started the tournament with three straight wins before falling 13-1 to Service Plus in the semifinals. They got back to the championship with a 14-11 win over Redfield Knockouts and they won two hard fought games over Service Plus, winning 21-5 in game one and 8-5 in game two.
Mobridge started quickly in the second championship game, scoring two runs in the first and four more in the second to take a 6-1 lead. With two runs in the fifth, Mobridge took an 8-2 lead into the last two innings. Service Plus scored one in the sixth and two in the seventh, but did not threaten to overtake the Mobridge squad. Elsey Larsen and Jacy Netterville had two hits and scored two runs each. Faith Heil drove in runs with a double and a triple. Tegan Konold, Brooke Merkel and Becca Cox added two-hit games.
The middle innings were big in the 21-5 win. After scoring two in the first and one in the second, Mobridge scored five runs in the third to take an 8-3 lead. Three more runs in the sixth upped the lead to 10-4. Five players had three-hit games. Pacey Konold had three hits including a triple and scored three runs. Netterville had three hits and scored three times. Ellie Kemnitz had two double among her three hits. Merkel and Tegan Konold also had three-hit games.
To get back to the championship, the Bridge City girls had to hold off Redfield Knockouts 14-11. Mobridge built a 14-7 lead after five innings and had to cut a late Redfield rally off when the gap closed to three runs in the seventh inning. The girls built their lead by scoring three runs in the first, four in the second, two in the fourth and five in the fifth. The top four hitters combined for 13 hits and 12 runs. Heil had four hits with two doubles. Tegan Konold, Larsen and Netterville had three hits each. Each of the foursome scored three runs.
In the 13-1 loss to Service Plus, Tegan Konold led off the game with a double, came around to score on a Blake Thompson hit and that was all the offense could muster as they fell into the losers’ bracket.
The girls opened the tournament with a 15-2 win over Watertown Green Machine. Mobridge scored one in the first, two in the second, three in the third and one in the fourth before pulling away with an eight-run fifth. Heil led the offense with three hits, including a home run, and three runs scored. Tegan Konold, Pacey Konold and Cox had two-hit, two-run games. Thompson drew four straight walks.
Green Machine scored their only two runs in the fifth inning.
Game two was a 9-4 win over NCA Thunder, a team that includes players from the Selby to Eureka area. Mobridge scored two in the first and two in the second to take a 4-2 lead. Two in the fourth and two in the fifth opened the lead to 8-4 before they salted the win away with one run in the sixth. Pacey Konold and Cox led the offense with two hits and two runs each. Four more players had two-hit games. Tegan Konold tripled and Kemnitz doubled.
In the next game, Mobridge beat Watertown Thunder 15-5. While the Thunder scored single runs in each of the five innings, Mobridge countered with a 10-run first inning and added one run in the third and four more in the fifth. Mobridge had 11 hits in the first inning, including a Netterville home run. Tegan Konold and Larsen each scored twice in the opening frame. Netterville hit for the cycle with a home run in the first, a single in the second, a double in the third and a triple in the fifth.
The 12U state champions are now qualified for the national tournament next week in Sioux Falls.

RenewedWomen the bedrock of the Bridge City: Teachers play an important role in education of cityFirst day