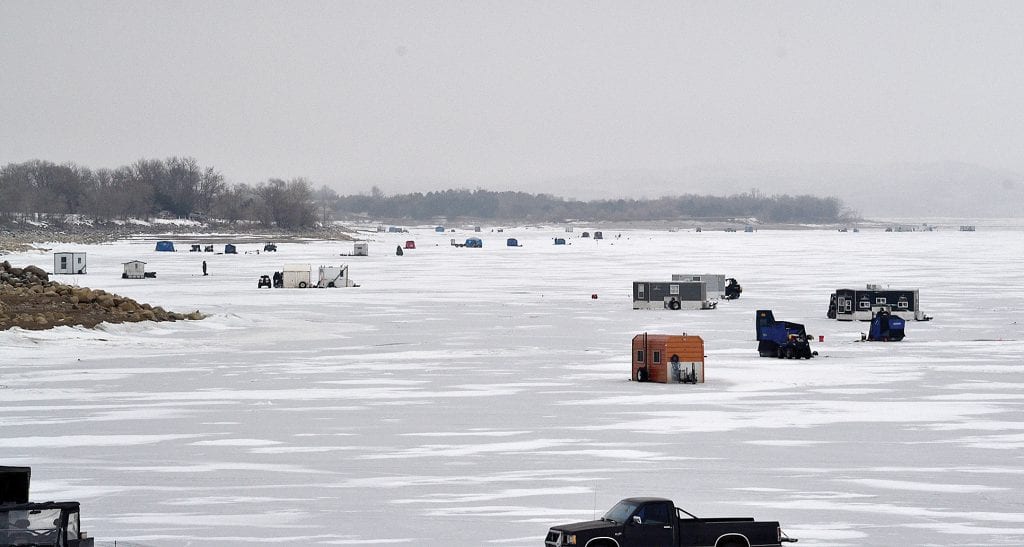 On the second weekend in January every year, 1,050 anglers from across the country set up camp on the ice of Lake Oahe. The anglers compete to catch valued walleye and vie more than $225,000 in cash and prizes. The 19th annual Mobridge Area Chamber of Commerce and Tourism Committee Ice Fishing Tournament starts Thursday, Jan. 9, in the Bridge City area.

Since the inception of the Mobridge Ice Fishing tournament in 2001, a group of anglers have been traveling cross-country to the event to enjoy the company, the tourney and the hospitality in Mobridge.
Jeff Betsworth is part of a more than 20-angler group who make a vacation out of the annual ice fishing event in the Bridge City. He has been fishing the tournament for many years but missed a few. Other friends from the group, Don and Conner Bidrowski have been here every year. Conner was 9 when he first fished the tourney. He is 28 years-old as he readies for this year’s event. The group has been in the area since last weekend and will be here until Sunday, Jan. 12. Conner flew in from California to attend the group’s annual outing.
Betsworth, who is from Omaha, said there are a multitude of reasons the group has chosen this area and this tournament for their get together.
“It’s just a great time,” he said. “We can’t beat the hospitality.”
Betsworth said the group has stayed at many places over the years and have found the people of this area are kind, helpful and welcoming.
“There are a lot of places to stay and the people have always been really great,” he said.
He said the fishing has been hit or miss with some great days and some bad days over the years, but the overall experience has been great. The anglers love the variety of fish they catch on Lake Oahe and hold fish fries while they are here but also take fish home to Omaha for more such gatherings there. He said they are here for the walleye, of course, but also take home catfish for those fish fries.
While the group is here, Betsworth said they fish hard and sometimes just stay at their homes away from home but also go out to eat, some go to the casino and others enjoy what the town offers. Betsworth said the tournament has allowed them to meet different people from across the Midwest and to renew old friendships this one time a year.
He said the group loves coming to the Mobridge tournament because the experience never gets old.
Betsworth said the group has been through quite a few adventures while fishing the lake, from people get stuck on the ice to four wheelers going through the ice, but it hasn’t changed their minds about coming back. Although Betsworth hasn’t won any of the bigger prizes (“I never win a damn thing,” he laughed), some of the group have been luckier. Last year a four wheeler went home with one of the group
“We never know what to expect. It’s a thrill,” he said. “It’s an adventure because there is something different every time.”
One year there were 24 in the group and the ice conditions were not great. The day before the tourney, they had two snowmobiles and were fishing on the west side of the lake. He said the two snowmobiles ferried the anglers West River to their fishing spot. At the end of the day, the anglers headed back to shore but one of the snowmobiles broke down.
“Here were 20 guys, walking across the ice, through the snow and slush,” he said. “Sometimes we would sink down into it.”
Betsworth said the fishing itself has been the biggest change in the tournament over the years.
“It has evolved and changed with technology and equipment that helps us find the fish,” he said. “And the shacks have gotten so much nicer.”
The organization of the event, the volunteers and comradery is what is appealing to his group.
“The organization of the tournament is just flawless,” he said. “It is so well-run.”
The group volunteers their time on Tuesday night, helping organizers put together the contestants’ buckets of goodies.
“We like to give a little back to the people who work so hard,” he said.