While the COVID-19 pandemic is still raging around the world, things return to normal for Saturday’s Mobridge-Pollock Invitational volleyball tournament.
One year ago, due to COVID-19 protocols, the tourney had to be split into two divisions with three teams playing here and three teams playing in Ipswich. There wasn’t much drama as the Lady Tigers swept Stanley County and McLaughlin by a total score of 150-54 and Ipswich swept North Central and Leola/Frederick in matches that were closer, but not much.
That, of course, marks the first time in 29 tournaments that there were two champions crowned. It was the second straight for Ipswich. They knocked off the Lady Tigers in 2019.
This year’s tournament has Herreid/Selby Area, Stanley County, McIntosh, Timber Lake, North Central and Cheyenne-Eagle Butte.
Herreid/Selby Area and Cheyenne-Eagle Butte are only teams outside Mobridge-Pollock and Ipswich to have a tourney title. The Braves won the tournament in 2009 and the Wolverines won it in 2010.
The tournament started at the Mobridge Invitational Volleyball Tournament during the 1989-90 season. The Lady Tigers won that tournament and won it again when it resumed during the 1992-93 season. Since the 1993-94 season, the tournament has been run every year with a weather-canceled tournament during the 1996-97 season the only exception.
That third tournament started a long run of titles for Sully Buttes. The Chargers won the tourney four times in row before the Lady Tigers won their third title during the 1998-99 season. Sully Buttes won the title again the next year before Aberdeen Roncalli started a two-year run. In 2002, the year volleyball switched to the fall, Sully Buttes won again, followed by Selby Area in 2003 and Sully Buttes again in 2004. The Lady Tigers won their fourth title in 2005. Leola/Frederick Area won in 2006 and Selby Area won its second title in 2007, the last year of the Mobridge tournament.
In 2008, the name was changed to the Mobridge-Pollock Invitational and the Lady Tigers won their fifth title. The 2009 championship for Cheyenne-Eagle Butte was the last time the tournament was played at Scherr-Howe Arena. In the first tourney played at Mobridge-Pollock High School Gymnasium, Herreid/Selby Area beat the Lady Tigers for the title.
The Lady Tigers took possession of the tournament in 2011 and kept it for a while, winning six straight titles until Faulkton Area won the title in 2017. That was followed by Faith in 2018 and Ipswich in 2019.
While we don’t know what Saturday’s brackets are yet, it would be the best of all things if the Lady Tigers and Ipswich, the defending co-champions, meet in the title tilt to settle things. 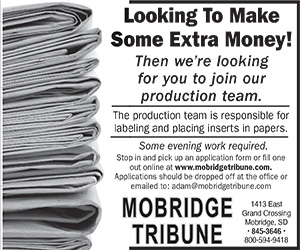