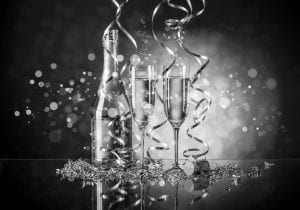 New Year’s Day, a national holiday celebrated on the first day of the New Year, is one of the oldest days of celebration known to man.
The day is marked as the first day of the New Year on both the Gregorian and the Julian calendar. The earliest known New Year celebrations were in Mesopotamia and date back to 2000 BC.
Celebrations and festivals marking the beginning of the calendar have been around for thousands of years and are noted in ancient history.
New Year’s Day is celebrated worldwide with fireworks, parades, and reflection upon the last year while looking ahead to the future’s possibilities. Many cultures celebrate in unique ways. Typically the customs and traditions of the day involve celebrating with champagne and a variety of different foods. Ancient Persians gave New Year’s gifts of eggs, which symbolized productiveness. Many parts of the United States observe the tradition of eating black-eyed peas on New Year’s Day for good luck.
Some festivities were linked to agricultural or astronomical events.  In Egypt, for instance, the year began with the annual flooding of the Nile, which coincided with the rising of the star Sirius. The Phoenicians and Persians began their new year with the spring equinox, and the Greeks celebrated it on the winter solstice.  The first day of the Chinese New Year, meanwhile, occurred with the second new moon after the winter solstice.
Romans would celebrate January 1st by offering sacrifices to Janus in the hope of gaining good fortune for the New Year, decorating their homes with laurel branches and attending raucous parties.
In medieval Europe, however, the celebrations accompanying the New Year were considered pagan and unchristian-like, and in 567 AD the Council of Tours abolished January 1 as the beginning of the year.
There is also religious significance to the New Year.
In the Roman Catholic Church, Jan. 1 is a solemnity honoring the Blessed Virgin Mary, the Mother of Jesus; it is a Holy Day of Obligation in most countries, requiring Catholics to attend mass on that day. It has become customary to celebrate mass on New Year’s Eve.
Other Christians hold New Year’s Eve watchnight services, especially Lutherans and Methodists, Those in the African American community hold services continuing past midnight, giving thanks for the blessings of the outgoing year and praying for divine favor during the upcoming year.
For some Americans, the New Year’s Eve celebration is a start of the two-day celebration with family and friends at which the evening party starts on New Year’s Eve and the New Year is marked at midnight with toasts, champagne and the traditional kiss as the clock strikes 12.
On New Year’s Day, for some the celebration begins with brunch, followed by a day-long marathon of college football or family celebrations with board and card games.
It is the day before resolutions to diet, take better care of oneself and quitting cussing and drinking kick in, so many celebrate well into New Year’s Day.
The following recipes can help with both New Year’s Eve and New Year’s Day celebrations. Be safe, enjoy and have a Happy New Year.

Chicken Club Brunch Ring
1 cup mayonnaise
2 Tbsp. Dijon mustard
2 Tbsp. fresh parsley, chopped
1 Tbsp. onion, finely chopped
1 (10-ounce) can white chicken meat, drained and flaked
4 slices bacon, crisply cooked, chopped
1 cup finely shredded Swiss cheese
2 (8-ounce) packages refrigerated crescent dinner rolls
1-2 large tomatoes, thinly sliced
1 medium red bell pepper
2 cups shredded lettuce
Preheat oven to 375 degrees.
In a bowl, combine mayonnaise and mustard. Add parsley and onion to mayonnaise mixture; mix well. In a two-quart bowl, flake chicken with a fork.
Add bacon, 3/4 cup Swiss cheese, and 1/3 cup of the mayonnaise mixture; mix well.
Unroll crescent dough, separate into 16 triangles and arrange triangles in a circle on a 13-inch baking stone with wide ends of triangles overlapping in the center and points toward the outside.
Scoop the chicken mixture evenly onto widest end of each triangle. Bring outside points of triangle up over filling and tuck under wide ends of dough at center of ring (filling will not be completely covered). Cut slices in half and place a half over filling between openings of ring.
Bake 20 to 25 minutes or until deep golden brown.
Remove from oven, immediately sprinkle with remaining Swiss cheese.
Halve and clean bell pepper and fill with remaining mayonnaise mixture; place in center of ring.
Arrange lettuce around the pepper and serve.

French Toast Casserole
8 large eggs
2 cups half-and-half
1 cup whole milk
2/3 cup maple syrup, plus more for serving
1 tsp. vanilla extract
1/2 tsp. ground cinnamon
Kosher salt
1/2 cup pecans
1/4 cup raisins
1 1/2 lbs. sourdough or country bread, cut into thick slices
Unsalted butter for the baking dish
2 tsp. raw sugar
Heat oven to 350 degrees.
Whisk together the eggs, half-and-half, milk, maple syrup, vanilla, cinnamon, and a pinch of salt in a large bowl. Stir in the pecans and raisins. Add the bread and soak, turning occasionally, until it has absorbed most of the custard, 20 to 30 minutes.
Arrange the bread in an overlapping pattern in a buttered 3-quart baking dish. Pour over any remaining liquid, nuts, and raisins from the bowl. Sprinkle with the raw sugar.
Bake until set and a knife inserted in the center comes out clean, 35 to 45 minutes. Serve warm, with additional maple syrup.
To make ahead, soak the bread and custard in a bowl overnight. In the morning, layer in a casserole and bake as instructed.

Spinach and Garlic Frittata
1 cup fine fresh bread crumbs
5 Tbsp. unsalted butter, 4 melted
1 dozen large eggs
1/2 cup milk
Kosher salt and freshly ground pepper
1 Tbsp. olive oil
4 garlic cloves, thinly sliced
Pinch red pepper flakes
1 lb. fresh spinach, large stems trimmed
1 teaspoon fresh lemon juice
Grated Parmesan cheese (optional)
Preheat the oven to 350 degrees. Spread the bread crumbs on a rimmed baking sheet and bake for about 5 minutes, or until lightly toasted. Transfer to a bowl and stir in the 4 tablespoons of melted butter. Leave the oven on. In a large bowl, whisk the eggs with the milk and season with salt and pepper.
In a large cast-iron or nonstick ovenproof skillet, melt the remaining 1 tablespoon of butter in the olive oil; swirl the pan to coat the bottom and sides.
Add the garlic and red pepper flakes and cook over low heat, stirring occasionally, until golden, about 3 minutes. Add the spinach and stir with tongs until slightly wilted. Drain off any liquid and spread the spinach evenly in the pan and sprinkle with the lemon juice.
Pour the eggs over the spinach and cook over moderately low heat until the bottom begins to set, about 4 minutes. Sprinkle the top with the buttered breadcrumbs and transfer the pan to the oven.
Bake for 15 to 20 minutes, or until the frittata is just set. Loosen the frittata with a spatula and slide it out onto a large plate, breadcrumb side up. Sprinkle with cheese if using. Cut into 8 wedges for service