The Bridge City Coin and Stamp Club held a random drawing from the 15 entries who correctly answered the America the Beautiful Quarters National Coin Week trivia contest questions.
First place, the 1987 Proof Set, went to Evie Pleinis of Mobridge; second place, the 1986 Proof Statue of Liberty Commemorative Half-Dollar, went to Karrie Stroeder Glenham; third place, a South Dakota Souvenir Quarter Set, went to Rhonda Landis of Mobridge. Each winner also received an early 1913-1938 Buffalo Nickel, a 2005 Westward Journey Buffalo Nickel and a 2010 Lincoln Cent, shield reverse with the blank cent planchet.
Club members dropped by the A. H. Brown Public Library and presented Karla Bieber a grouping of numismatic books to upgrade outdated volumes and fill gaps in other collecting interests. Donated were: “Guide Book of U.S. Coins 2014, “Standard Catalog of U.S. Paper Money,” “Circulating World Coins 1901 to Present,” and “Standard Catalog of World Coins 1601 to 1700.”
For the younger collectors there were “Lots and Lots of Coins,” and “Coins for You Old and New.” This is the third consecutive year the club has purchased books for the library, and the numismatic listing now includes 24 titles.
The local club is a member of the South Dakota Coin and Stamp Association, the American Numismatic Association and at the May 2 meeting the members approved the motion to become a member of the Central States Numismatic Society.
The club’s annual summer picnic is scheduled for Aug. 5 at the City Park.
There will be no business meeting during June, July or August. 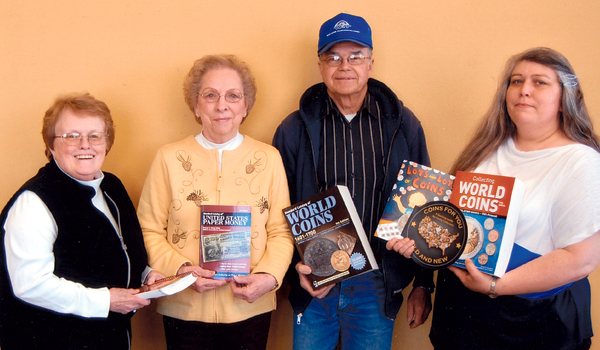