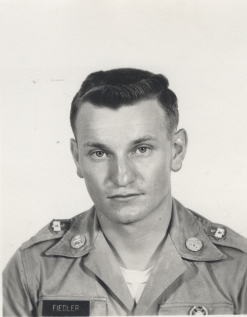 Mass of Christian Burial for Gary Fiedler, 75, of Glenham, was held on Wednesday, March 17, 2021, at St. Joseph’s Catholic Church in Mobridge.
Burial was in Glenham Cemetery under the direction of Kesling Funeral Home of Mobridge.
Gary passed away on Friday, March 12, 2021, at Mobridge Regional Hospital.
Gary Glenn Fiedler was born in Mobridge to John and Emma (Schaffer) Fiedler. The youngest of nine children, Gary graduated from Glenham High School in 1963 and worked on the family farm until he was drafted into the U.S. Army in 1965, during which time he served until 1967 in Thailand in support of operations in Vietnam, assigned to Special Operation Forces in the motor pool as a mechanic. It was also during this time that he formed lifelong friendships with a group of “Army buddies,” most notably Lonnie Cox, Michael Doyle and George Harp.
Upon his return, he began his career in trucking. Gary was especially proud of hauling the Lord’s Prayer Monument to the Selby cemetery while working for Selby Implement. Later, he settled into Jensen Rock & Sand for 37 more years and could be heard honking the horn for his kids as he drove by the house on one of his many trips. During his early trucking years, Gary and Barbara Mindt (whose sister he had previously taken to prom) reacquainted and were married in a double ceremony with Clarence Mindt on July 14, 1972. This union began the formation of the unofficial Glenham Baseball Team, a group of nine kids whom Grandpa Mindt lovingly dubbed “Cox’s Army” and whom Gary raised diligently and faithfully.
Gary’s calloused, gentle hands were a map of his work ethic and service to others, for he was always doing something for his family, his neighbors, his school district, his community, his church or a stranger in need. He served on the Glenham and Selby school boards, drove bus for Glenham High School sporting events, bladed snow for the town of Glenham and thrilled his kids with rides in the loader bucket as he put up the town’s Christmas decorations every year. Gary understood the importance of family and always found time when he wasn’t working or farming to play a mean game of hide-n-go-seek (notoriously hiding under the teeter-totter and out-running his kids), to start a marathon game of UNO, stacking draw-fours against his kids, or to break out the Aggravation board game he made by hand as his crew gathered around the 50-foot family dining room table that he also made by hand…a table that Barb is currently dismantling as this is being written (Dad would enjoy seeing that his legacy of humor continues in his children who are laughing alongside their mom while writing this). It is on this homemade table where Gary sat at the head and scooped countless gallons of ice cream to his children over the years and where he taught some of his 13 grandchildren how to make “Grandpa’s Cereal”: Cheerios, milk and tons of sugar. On Sunday nights, if the Fiedler nine behaved, they were treated to bowls of stove-popped popcorn, “Bonanza,” “Star Trek,” “Big Valley” reruns and “The Three Stooges.”
Gary leaves behind many who are grateful for having shared his life, including his wife of nearly 49 years, Barbara, who dutifully, gracefully and humbly stayed by his side loving and caring for him – holding his hand until he was called to his Heavenly home on March12, 2021. Also grateful of having shared his life are his children, Martin, Nancy (Brian) Larson, Jody (Josh) Olheiser, John, Sara, Emily (Brent) Gill, Aaron, Nicholas and Adam (Daysia); his 13 grandchildren, Skylar, Cael, Gracin and Hayden Larson, Jakob and Joseph Olheiser, Evelyn, Kendyl, Quayde and Cayn Gill, and Bexley, Hazel and Vincent Fiedler; his siblings, LeMoyne (Lois), Virginia (Dean) Gunderson, DuWayne (Jocy), Lowell (Ginger), Gerald, Nadine Meyer and Karen, as well as his special “little sister” Lynn (Fiedler) Jensen.
Gary was preceded in death by his parents, John and Emma; his sister, Geraldine Darnell; his sister-in-law, Jeri Fiedler; and his niece, Melissa Gunderson. He was also preceded in death by his mother- and father-in-law, Walter and Martha (Lenhert) Mindt, and their children, Arnold, James, Melvin and Jeanne; sisters-in-law, Donna and LaDonna Mindt; his brother-in-law, Al Reiss; his niece, Katherine Mindt; and his nephew, Kenny Mindt.
Gary’s casket bearers include his nephew/godson, Chris Fiedler, his sons-in-law, Josh Olheiser, Brian Larson and Brent Gill, and his grandchildren, Jakob Olheiser, Joey Olheiser, Cael Larson and Skylar Larson.
Honorary casket bearers include his nephew/godson, Jeffrey Reiss and all of his Jensen Rock & Sand “crew.”