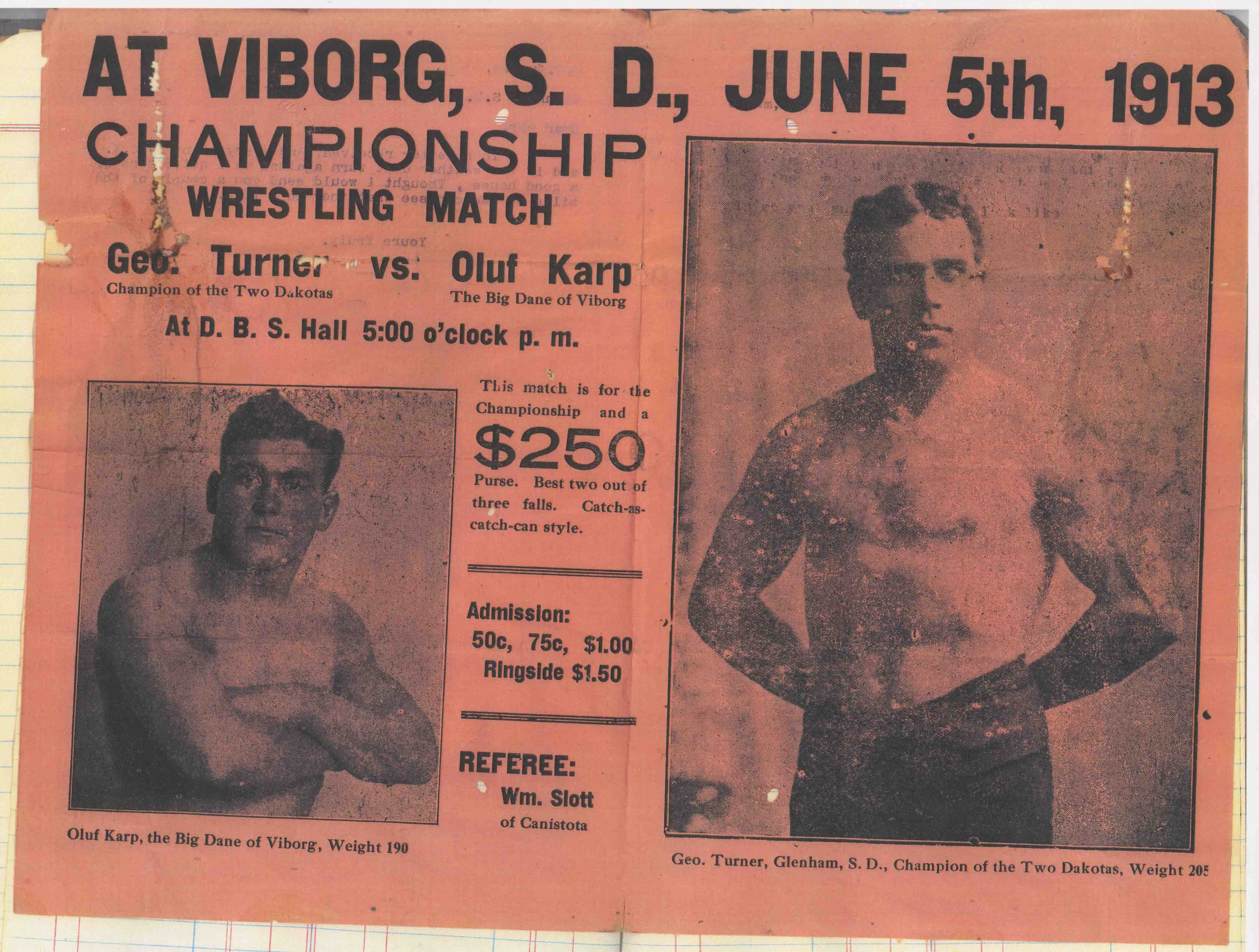 Before there was Gorgeous George, Superstar Billy Graham, Hulk Hogan, Jesse “The Body” Ventura, Dwayne “The Rock” Johnson, Stone Cold Steve Austin, John Cena, Mean Gene Okerlund or Reginald “The Crusher” Lisowski, there was Walworth County’s own George W. Turner, The Farmer Wrestler.
According to the website Legacy of Wrestling: “George W. Turner was one of the most significant wrestlers in South Dakota Wrestling history. He retired as the South Dakota State Heavyweight wrestling champion.
Born on Nov. 15, 1875, in Turner, Iowa, near Grinnell, George served in the Spanish-American War as part of the Iowa 50th Voluntary Infantry. He was trained as a wrestler by Farmer Burns and Frank Gotch, and wrestled many matches throughout the Central States and Upper Midwest.”
Old newspaper accounts have made it possible to piece together some of Turner’s exploits. Remember, when Turner was in his heyday the wrestling that evolved into today’s professional wrestling was considered a serious sport. It was in fact, second only to horse racing in its popularity.

Baseball was just becoming America’s pastime, but had not reached that acclaim. The wrestling was considered legitimate (for the most part) until the 1930s when the all-star wrestling version started its rise to popularity.
Now, back to George W. Turner.
Turner got his start in wrestling when he was a college student. He attended an exhibition between Gotch and Burns. Taking a step back, Frank Gotch was the world champion from 1908 to 1913 (one of the 10 longest in professional wrestling history). At the time he was probably the most famous athlete in the United States. There are accounts that call him one of the America’s first sports heros. So, Turner went to see the exhibition. After the exhibition Gotch offered $50 to any man who could stay with him 15 minutes without a fall. Turner took the offer. Gotch put Turner to the mat in less than a minute, but that was not the end, it was merely the beginning.
According to the account, Turner responded by saying, “They have made a monkey out of me tonight but I will show them that I can make a wrestler of myself.”
A relationship evidently grew fast from there. Gotch himself taught Turner the wrestling game and turned the Grinnell College lad into an important figure in turn of the century wrestling. Learning from Gotch was immensely helpful in two ways. Not only was Gotch the best and most famous wrestler in the world, he was also the best at self-promotion. When Turner began wrestling, his upcoming bouts were promoted and made to be important dates for sports fans to see.
His early matches were in Iowa until he was sent to rural Glenham to operate some land his father had bought sight unseen. It seems he was wrestling sometimes three matches a week at points of his career. And there was money to be made. Along with the stakes put for forth by the promotors, the gambling was hot and heavy. Good wrestlers, and Turner was one of them, made good money.
While in Iowa, Turner beat a fellow named McPeak with three falls in 32 minutes. It seems to be one of the matches that sparked his popularity. From that article: “Turner is recognized as one of the six greatest wrestlers in the business, and is the only American wrestler to-date who has ever gained a fall on the great Pole wrestler Stanislaus Zbyszko, who is to wrestle Gotch for the world’s championship.”
Soon after that he beat the French champion Carl Pons. Lesser Iowans, Minnesotans and Wisconsinites also became his victims while he was still in Iowa.
Once in South Dakota, Turner put many victims to the mat. Some of the South Dakotans he extinguished include Oluf Karp “The Big Dane of Viborg,” Ed Olson of Harrold and John Gordon of Aberdeen who was billed as the Police Champion of the World. Another match in South Dakota was against Dr. B.F. Roller. Roller, a real doctor, was another Gotch disciple, who was regarded as one of the most popular wrestlers in the world. In that match, Turner was given the win when Roller could not gain a fall in an hour, which was the stakes in that particular match.
He also had matches against Henry Ordemann (loss) and Jess Westerland (win) who were two of the three wrestlers, along with Roller, who were in line to be the next world champions after Gotch retired around 1915.
Turner’s grandson, George Turner of Glenham, has heard many a story of his grandfather’s exploits, but never got to see any of them. George W. Turner’s son, and George Turner’s father, Othiol, was just a lad during his father’s wrestling career. But George remembers his grandfather, who lived to be 95 and died in 1970, well.
“He never did quit training,” said George. “Grandma didn’t agree with it so he would find different ways to use the farm for training.”
George tells the story of when his grandfather could not find anyone to train with so he used one of the farm’s bulls as a sparring partner.
“Until the bull would see him coming and just lay down,” said George.
While the wrestling in George W. Turner’s day was considered mostly legit, in some accounts there were hints of hinky things going on with matches in the early 1900s. There was a story about Frank Gotch losing to a fellow in Wisconsin when Gotch hit his head and melodrama ensued. A month later on Gotch’s home turf, he beat the Wisconsin wrestler in two quick falls. The story goes that the referee told the reporters that both wrestlers fought hard and there were no hijinks involved. The ref told the reporters that as he clutched a fresh wad of cash in his hand.
While much of the wrestling during George W. Turner’s time was carnival wrestling (where the wrestlers would take on challengers from the crowd for stakes money), George W. was an attraction. His matches were held in places with names like the Colonial, the Orpheum, the Bijou, and even the Selby Opera House.
In fact his match with Henry Ordemann was in Selby. Ordemann won that match by using the “toe holt.” George W. wanted a rematch with the toe hold barred, but there is no mention of Ordemann wanting anything to do with that.
His wrestling in Selby, spurred by his win over Olson the hero of Harrold, seemed to make many wrestling fans think the Walworth County seat was his home base of operations. That was something the Glenham Athletic Club took exception to in an old newspaper account from the Aberdeen News.
Millions of wrestling fans of modern-day wrestling WWE, NWA, Ring of Honor wrestling, and such, have George W. Turner and his compatriots to thank for the sport they love today.