Groton beat Mobridge 5-4 on a walk-off, hit-by-pitch in the bottom of the ninth in the opening round of the District 2B amateur baseball tournament in Redfield on Tuesday.
With the scored tied at 4-4, Tim Hannigan led off the Groton half with a double. After he was sacrificed to third, Mobridge pitcher Cassius Kocer intentionally walked two batters to load the bases. An inside pitch to Spencer Hawk proved to be too far inside. Hawk took the pitch to the body and Hannigan scored the winning run.
The Cardinals trailed 4-2 in the top of the ninth before scoring two runs to tie the game. Tyler Stenberg led off with a hit and scored on a Greg Heyne double. Heyne then scored on a Jon Schlomer hit.
The Cardinals had a couple more opportunities to score, but could not get the timely hits with runners in scoring position earlier in the game.
“We had guys on base, but we couldn’t get a hit when we needed it,” said player/manager Ryan Hoffman.
Kocer was the tough-luck loser after throwing all nine innings.
Stenberg, Schlomer and Andrew Overland led the offense with two hits each. Schlomer, Kocer and Heyne hit doubles.
Chad Ellingston got the win for Groton. He took over in the ninth for Ryan Delzer to stop the Cardinal rally.
Hawk led the Groton offense with three hits. Ellingston, Zach Harry and Tyson Palmer added two hits each.
The Cardinals will try to keep their season alive in the “loser out” game on Thursday at 8:30 p.m. Mobridge will play the loser of the Northville-Redfield Pheasants game, which will be played tonight.
The Cardinals have their work cut out for them if they are going to advance to state. The top two teams in the district advance.
“We have to win three games,” said Hoffman. “It will be tough. We’ll be short on pitching.”

Redfield DQ
The Cardinals got “Tovared” in dropping a double header to Redfield DQ in Redfield on Saturday.
Redfield’s Edgar Tovar beat the Cardinals with offense in game one and pitching in game two.
Mobridge built a 5-3 lead in the first three innings of game one, only to have Redfield battle back to tie the game in the fourth. Tovar gave the home team the lead with a two-run home run in the bottom of the fifth. Redfield tacked on two more runs in the sixth and won the game 9-5.
Cassius Kocer threw the first three innings for Mobridge before giving way to Derek Veldhuisen and Scott Hoffman. Kocer and Kyle Henderson led the offense. Kocer had two doubles, while Henderson knocked three singles.
“We didn’t let anyone throw too many innings,” said player/manager Ryan Hoffman. “We were trying to get everyone ready for the tournament.”
After the Cardinals got to Redfield starter Isaac Lukes, Keith Gall and Justin Downes came into give up just three Mobridge hits over the last four innings.
Kelly Coates had three hits, while Chris Struder, Tovar and Downes had two hits each.
Tovar overwhelmed the Cardinals in game two with a five-inning no-hitter and Redfield won the nightcap 11-0.
“We couldn’t figure him out,” said Hoffman. “He came at us with a lot of off-speed junk.”
Redfield scored eight runs in the first inning and never looked back. 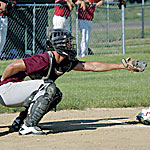