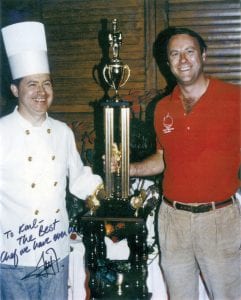 Moving from a busy life in the Los Angeles area to a small town in northern South Dakota might seem to be a huge adjustment to make. Karl Grethe seems to be taking it in stride.

Karl is an executive chef who has traveled the world working for major corporations and hotel chains. He has managed the food service of 400-room hotels with multiple dining rooms, designed kitchens and menus for luxury resorts and catered large parties for celebrities and dignitaries from around the world.

He recently retired and has taken on managing the kitchen at West Side Meats, which is owned and operated by his sister, Carla Lang.

Born in Bremen, Germany, before the start of World War II, Karl’s life as a chef began when he was 14 when he decided he would become a baker. His sister recalled that although he worked very hard and for little pay, he learned how to make all these good German pastries and breads.

He later trained as a pastry chef in culinary school in Bremen, Germany, for three years and expanded his education in the hotel chef program at the culinary school. Karl’s cuisine expertise ranges from the classic French to Indonesian to Middle Eastern.

Karl spent the majority of his career, 45 years, in the hotel industry. He has worked in some of the best-known hotels and resorts in the world, helping to develop concepts and menus and overseeing the grand openings of the businesses. His jobs have taken him to Australia, Puerto Rico, Hong Kong and the Middle East. Karl worked for some of the largest hotel groups in the country, including Sheraton, Hyatt, and Radisson and was also the executive chef at the famed Whitehall Hotel in Chicago. While living in Chicago he also worked as the executive chef at the Playboy Towers.

He came to the United States in 1959 and began looking for work in New York and Florida for several years. He started out “cleaning and peeling vegetables,” and was homeless for a while. He returned to New York from Florida and landed a job in a French restaurant. It didn’t take him long to move up the ladder from prep cook to executive chef. He stepped in when a chef did not show up for work and his career took flight.

Karl has been an executive chef at several private clubs, and a trouble-shooter for new and established hotels. He owned his own restaurant in California and was a sought-after consultant in the industry.

Along the way he was named as the Chef of the Year in 1977 for the entire Hyatt Corporation and again in 1981 for the Radisson Hotel chain.

He recently retired and moved to Mobridge to be closer to his sister and help her at Westside Meats.

He has been in Mobridge for about a month and said he is happy to be here. He said Los Angeles is just too big with too many people and too much crime.

“So far here it is excellent,” he said. “The people are very nice.”

He is meeting people through his new job of preparing the lunch specials at the market and is getting used to people waving at him on the street.

“In California, you would wonder what they wanted,” he said.

He likes the relaxed environment of the small town and is not concerned that he will get bored.

When he isn’t working, he likes to watch TV and looks forward to getting out in a boat to fish on Lake Oahe.

His long-term plans are to enjoy his retirement in small town South Dakota.

Blanch the salmon in a court bouillon for 5 minutes. Let cool in its own juice. This can be done in the morning for dinner service. On a 10-inch square of aluminum foil or heart-shaped piece of parchment paper, place 3 slices of tomato, a few mint leaves, and the filet of salmon. Sprinkle with salt, pepper and coriander. Add more tomato slices and mint. Close each square of foil or parchment paper very tightly. Bake at 350 degrees for 15 minutes. Packets should puff up. Slide onto heated plate and have server cut packet open at the table. Serve Béarnaise sauce on the side if desire. Makes about 8 servings.

Grease grill rack lightly and set it 4 inches above heat. Have racks of ribs cracked across center. Combine remaining ingredients in a small saucepan; bring to a boil, stirring occasionally. Brush ribs on both sides with sauce; place on rack. Grill about 1 hour, turning and basting with sauce every 10 minutes. Makes about 8 servings.

Sift flour with baking powder and salt into a mixing bowl, stir in oats, sugar and the pecans. Combine milk, butter and the eggs. Add to the dry mixture, stirring until moistened. Spoon into greased or lined muffin cups. Bake at 350 degrees for approximately 30 minutes. Cool on a wire rack.

juice of one lime

salt and pepper to taste

Dredge chicken breasts in flour then sauté in oil both sides for 3 to 4 minutes. Add tomatoes and garlic and cook one minute longer. Squeeze lime over chicken, season with salt and pepper and serve with mixture on top.

In a bowl, whisk together chicken broth, soy sauce, water, cornstarch, sugar, garlic powder and ginger. Set aside. In a heavy skillet or wok, heat oil until very hot. Add vegetables to oil and stir-fry until crisp-tender. Stir sauce and pour over vegetables. Continue to stir-fry until sauce is thickened and clear. Yields 8, 4 oz. servings.