Funeral services for Jeri Diane “Tyke” Fiedler, 73, of Glenham, will be held Thursday, Aug. 1, 2013, at 11 a.m. at Zion Lutheran Church with Pastor Seth Georgson officiating.
Burial will be in the Glenham Cemetery under the direction of Kesling Funeral Home of Mobridge.
Public visitation will be at Zion Lutheran Church at 5 p.m. with a prayer service at 7 p.m.
Jeri passed away Saturday, July 27, 2013, at Mobridge Regional Hospital.
Jeri “Tyke” Fiedler was born March 27, 1940, to Morris and Verna (Afrank) Crabbe in Mobridge. Because of her low birth weight, Jeri was given the nickname Tyke by her doctor.
She attended Mobridge schools and graduated in 1958.
On June 15, 1958, she was joined in marriage by the love of her life, Gerald Fiedler, at St. Jacobi Lutheran Church in Glenham. Following their marriage they resided in Glenham and raised four children.
Jeri held numerous jobs, some of which include working for the Mobridge Care Center, Garold Weiland at Dakota Western and the Glenham Convenience Store. She retired from the Glenham Postal Service in May of 2002, where she was employed for almost 20 years.
Jeri was baptized and confirmed at Zion Lutheran Church and was a member of St. Jacobi Lutheran Church. She was a member of Ladies Aide and was very active in her church. She was well known for her good cooking and her canned garden vegetables.
Jeri loved family gatherings and her goal was to complete a quilt for each of her immediate family members. She was also very involved in all of her grandchildren’s activities and rarely missed out on anything.
She received the nickname of “Grandma Grape” from one of the great-grandchildren. Her love for polka music never ceased, but her greatest love was family.
Jeri is survived by her husband, Gerald; three daughters, Shelly (Ivan) Goetz of Spearfish, Marlys (Patrick) Starks of Selby and Susan (Monte) Kretschmar of Cresbard; one son, Bradley (Jimi) Fiedler of Phoenix, Ariz.; 11 grandchildren, Galen (Bobbi) Goetz, Jillian (Verno) Musselman, Levi Goetz, Vanessa (Jesse) Wudel, Katelyn (Josh) Wudel, Zachary Starks, Hayden Fiedler, Curt Fiedler, Regan (Shane) Malsam, Dalton (Ashley Florey) Kretschmar and Stetson Kretschmar; and four great-grandchildren, Annika and Liam Goetz and twins Hadleigh and Charleigh Musselman. She is also survived by her sisters, Connie Gosch of Glenham, Sandra Arnold of Aberdeen and Colleen Hummel of Lacy, Wash.; brothers, Doug Crabbe of Everette, Wash., Darwin Crabbe of Glenham and Michael (Deb) Crabbe of Underwood, Iowa; and numerous nieces and nephews.
Jeri was preceded in death by her parents. 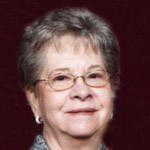 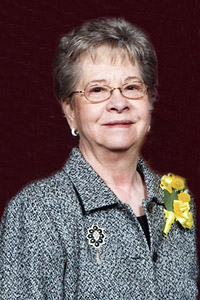