Lady Tigers go inside for Region 6A win 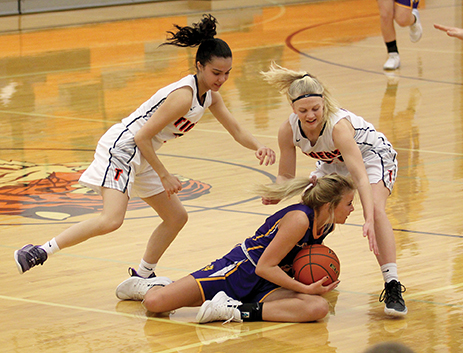 Maya Nobles (left) and Katy Kemnitz use pressure defense to put Kori Gabriel of Stanley County in a perilous position during the Lady Tigers’ 59-29 win over the Lady Buffaloes in the Region 6A semifinals at Mobridge-Pollock High School Gymnasium on Thursday.

With a shot at their first-ever trip to the SoDak 16 on the line, the Lady Tigers took it to Stanley County for a 59-29 win at Mobridge-Pollock High School Gymnasium on Thursday.
With the team’s best outside shooter, Mariah Goehring, on the sideline after suffering a concussion at Winner, coach Stephen Hettick said the team had to make an adjustment in how they would attack the Lady Buffaloes.
“With Mariah out, we knew we would have to focus on getting our points inside as well as off of steals with transition points,” said Hettick. “Winning by 30 without making a three, I think we handled it pretty well.”
Megan Zahn and Landyn Henderson took care of getting points on the inside. Zahn scored six points in the first quarter as the Lady Tigers jumped out to a 13-5 lead. Henderson scored seven points in the second quarter helping the team to build a 17-point, 32-15 halftime lead. Both finished strong, scoring six points each in the fourth quarter.
“Megan and Landyn played huge inside for us,” said Hettick. “That’s leaders being leaders in the postseason.”
For the game, Zahn scored a game-high 16 points. Henderson was right behind with 14 points. Both girls crossed the 600-point threshold for their careers in the second half.
As for the defense, the Lady Tigers forced 34 turnovers and picked off 21 steals. They scored 27 points off Stanley County turnovers.
A lot of players got into the act as Emma Keller had five steals, while Heidi Olson had four and Henderson, Maya Nobles and Reagan Weisbeck had three each.
“The girls did a good job with the trap,” said Hettick, “except early in the third quarter but we took a time out and fixed that.”
Following Zahn and Henderson, Olson scored nine points and Keena DeMarrias scored eight. Nobles, Keller and Emily Hatzenbuhler added four points each. Zahn added eight rebounds, three assists and a blocked shot.
After missing the game, Goehring is back at practice and expected to be on the floor when the Lady Tigers play on Thursday.
Mattie Duffy led Stanley County with nine points and six rebounds. Jordyn Sosa scored a team-high 10 points.

Hamlin
The Lady Tigers advance to take on Hamlin in the SoDak 16 on Thursday. Tipoff is set for 5:30 p.m. in the Watertown Civic Arena.
The 14-7 Lady Tigers are the 14 seed, while the 19-2 Chargers are the 3 seed.
Hettick said the Chargers’ size will have to be dealt with.
“They’re not huge, but they’re consistently big,” said Hettick. “They don’t have any 6-footers, but they are 5’10, 5’11 across the board. And they are strong. We’re going to have to pressure them and try to wear them down.”
The Lady Tigers and Chargers have met just one time in the past. They met on a Friday night in Mitchell when the Lady Tigers won a 43-28 game in the semifinals of the 2006 Class A Girls State Basketball Tournament.