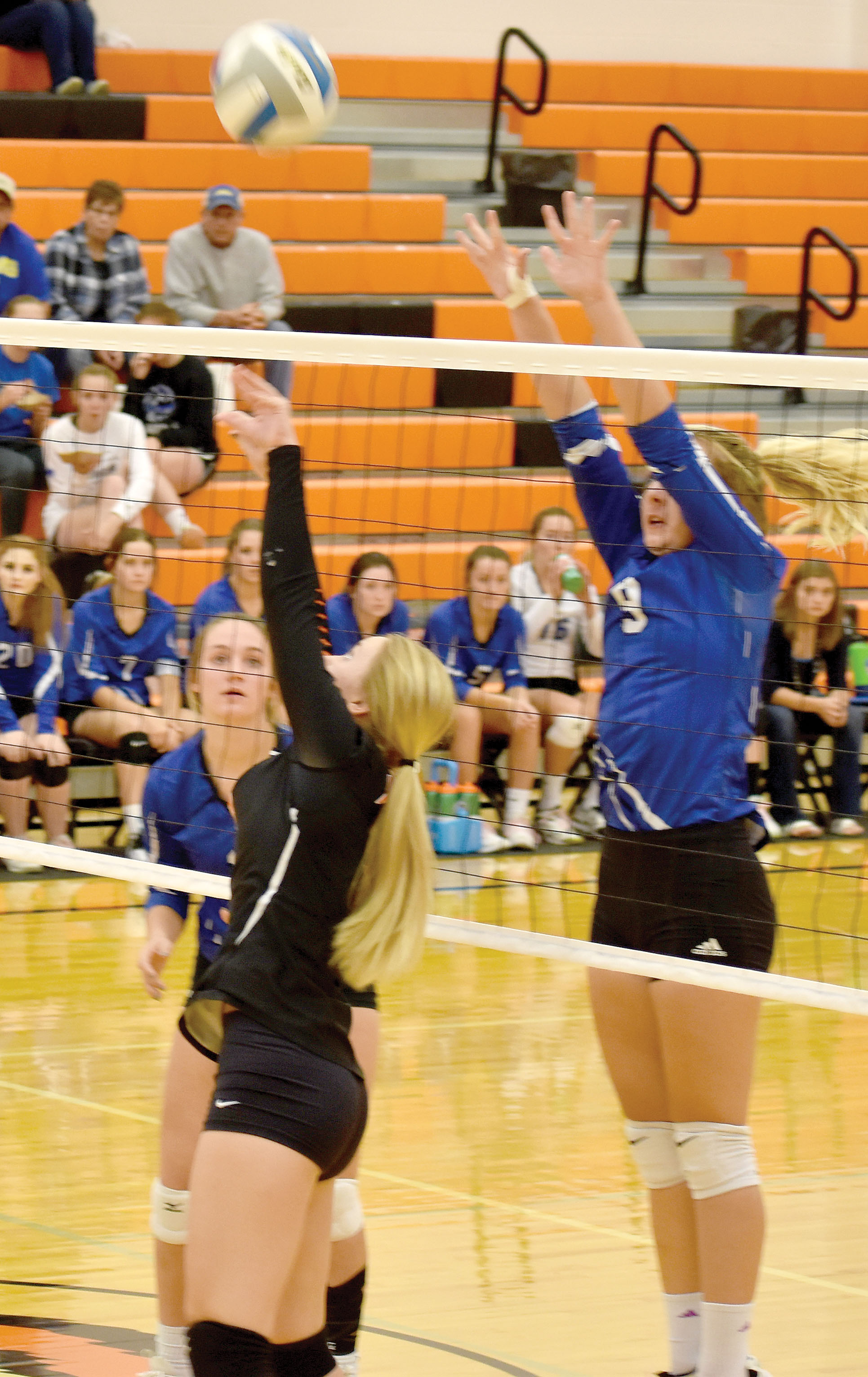 While they played with less consistency than they have on recent nights, the Lady Tigers played best at the end of each set in pulling off a 3-0 win over Cheyenne-Eagle Butte at Mobridge-Pollock High School Gymnasium on Tuesday.
“It was a good win against a scrappy team,” said coach Rose Henderson. “It was a good team win.”
Henderson said the inconsistent play may have been caused by the Braves. She said they are a team that plays a little different style.
“With their offense, we never knew when the ball was coming our way,” said Henderson. “They played a different defense, so it was hard to find holes at times. Then when they changed, we had a hard time adjusting.”
It looked like it might be a short night in the early going. The Lady Tigers got off to a quick 8-2 start in set one only to have the Braves come charging back. Set one stayed close until Landyn Henderson drilled a kill to give the Lady Tigers a 24-21 lead and Ellie Fried put one to the floor for the set’s final point.
The Lady Tigers got off to a huge lead in set two. Three Emma Keller aces were part of a 9-1 start. A pair of Regan Stoick aces helped up the lead to 18-5. But, back came the Braves. The visitors went on a 15-3 run that cut the lead all the way to 20-17. A Stoick kill got the Lady Tigers going again. With a 23-21 lead, the last two points mirrored the first set. Henderson got a kill and while Fried did not get the kill on the final point, her attack could not be handled by the Braves’ defenders.
Set three was back and forth until the late stages. With a 19-17 lead, Emma Keller got things started with her sixth ace of the match. And then Megan Zahn took over. Zahn had four kills over the last five Lady Tiger scores, including the night’s final point.
Henderson said that there were a lot of Lady Tigers who played well at key times during the night, which is why it was such a good team win. Up front Henderson and Fried had their key points in sets one and two and Zahn came up big in the end. Throughout the night, Channing Wientjes added points, scoring six kills. Keller added a career-best 30 assists to her six-ace night. Callie Weisbeck backed her up with three aces. Henderson added that on defense, Emily Wientjes, Haley Brockel and Stoick all played well.
Julia Spoonhunter led the Braves with three aces, two kills and a block. Miranda Vines had a team-leading four kills.

Lemmon
The Lady Tigers controlled most of the action in a 3-0 win over Lemmon at home on Thursday.
The Lady Tigers won two 25-20 sets before holding off the Cowgirls 26-24 in the third set.
The Lady Tigers won the first set with a late surge. After Mobridge-Pollock took a 20-16 lead, Lemmon rallied to get within one at 21-20, but then Landyn Henderson had a kill and an ace to make it 24-20 before Megan Zahn put the game away with a smashing point.
Set two did not have any drama. The Lady Tigers held the lead all the way and led by as much at 21-12 before Lemmon got the score back to 21-17. The Lady Tigers scored three straight points to get to 24-17, only to have Lemmon score three of their own before the Lady Tigers ended it.
Lemmon got things going in the third set and held a 22-17 lead before the Lady Tigers mounted their comeback. Henderson had three kills and Ellie Fried one as the Lady Tigers drew to within 23-22. Facing set points, Zahn ripped a kill. Lemmon made three straight errors after that and the Lady Tigers ended a two-match losing streak to the Cowgirls with the straight set win.
Henderson had a big match with 10 kills, five blocks and two aces. Zahn backed her up with eight kills, three blocks and three aces. Emma Keller was perfect on 78 sets with 28 assists. Emily Wientjes led a strong defensive effort with 12 digs. Haley Brockel, Regan Stoick and Callie Weisbeck combined for another 24 digs.
Tally Katus and Zayda Dirk led the Cowgirl offense with six kills each. Anna Beer led the defense with a match-high 20 digs.

After an opening round loss, the Lady Tigers bounced back with two straight wins to capture fifth place at the Central South Dakota Conference Volleyball Tournament in Gettysburg on Saturday.
Host Potter County got the Lady Tigers in a 25-19, 25-21 match in the first round.
The Lady Tigers dominated play in a 25-10, 25-17 win over Sunshine Bible Academy in the consolation semifinals before fighting for a 25-22, 17-25, 25-17 win over Highmore-Harrold in the fifth-place match.
The Lady Tigers played their most consistent match of the day in garnering the consolation title. They were perfect on 63 serves and 62 sets, while hitting 55 of 66 attacks. That led to a 17-kill match. The girls were balanced across the net with Landyn Henderson landing six kills and Megan Zahn and Channing Wientjes four each. Callie Weisbeck led serving with three of the team’s eight aces. Emma Keller handled most of the setting and dished 13 assists.
With Regan Stoick leading the way with nine digs, the defense came up with 32 digs and five blocks.
In the win over Sunshine Bible Academy, Keller and Stoick had three aces each. Zahn led the offense up front with seven kills. Emily Wientjes led the defense with eight digs.
Coach Rose Henderson said the Lady Tigers committed too many unforced errors in the loss to Potter County. When they were getting things done, Channing Wientjes led the offense with seven kills and Emily Wientjes led the defense with 11 digs.
Henderson said there was no all-tournament team, but if there were, Stoick had an outstanding day.
“She played consistently throughout the day,” said Henderson.

Lady Panthers
The Lady Tigers host Timber Lake on Saturday before traveling to Redfield on Monday.
The Lady Tigers and Lady Panthers are meeting for the second time this year. Mobridge-Pollock won a 2-0 match at the Mobridge-Pollock Invitational on Sept. 14.
“You never know what’s going to happen with Timber Lake,” said Henderson, “but it will be nice for the girls to finally have a Saturday morning where they don’t have to get up early and get on a bus.”
Saturday’s match will be the 43rd meeting between the Lady Tigers and Lady Panthers. The Lady Tigers are 34-6-2 all-time in the series and have won two straight, but the Lady Tigers won two in a row before that.
Mobridge-Pollock faces an old nemesis on Monday in Redfield. Heading into the 25th match between the two teams, Redfield owns a 19-5 record in the series. The Pheasants have won the last two meetings, including a 3-0 win in the Bridge City last fall.