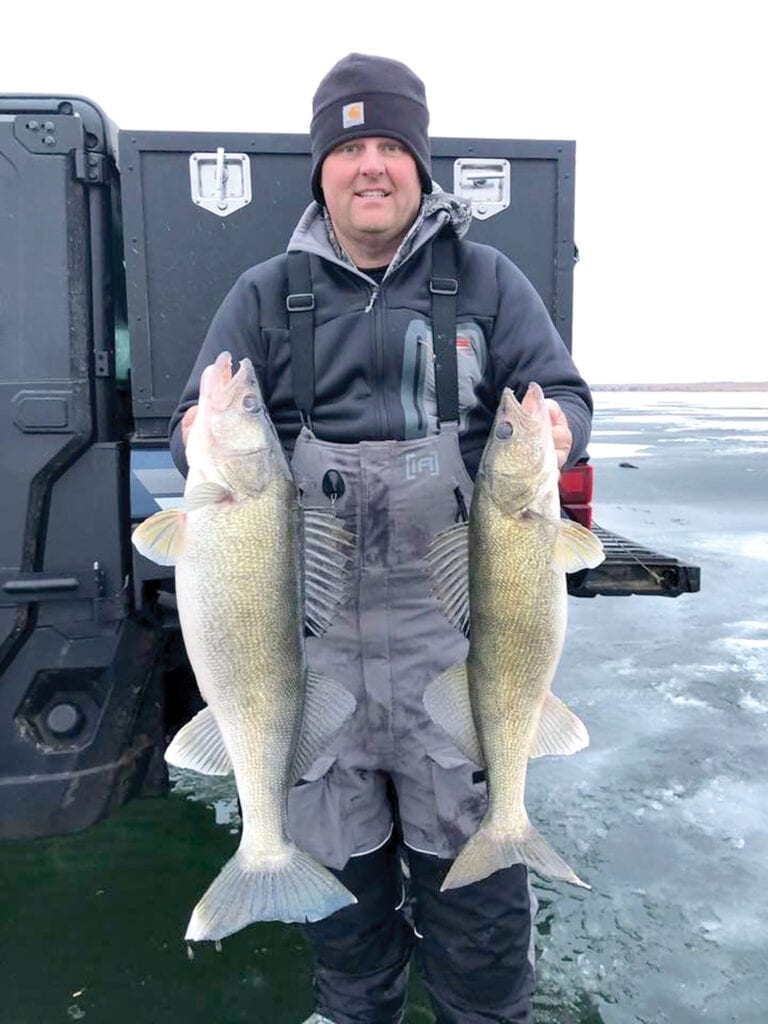 Mobridge angler Levi Duncan and his partner Quintin Schlomer of Glenham took home first place at the annual ice fishing tourney with these two whoppers and four other walleyes for a total of 21.38 pounds.

Local anglers were successful at the 20th Annual Chamber of Commerce Tourism Committee Ice Fishing Tournament as several area teams finished in the top 25, including taking the top prize.
Local anglers Levi Duncan of Mobridge and Quintin Schlomer of Glenham, who have fished the tournament for 20 years, brought in six fish to weigh in 21.38 pounds of walleye, to take first place.
Jason Dallman of Mobridge and Matt Dallman of Spicer, Minnesota, landed six fish, weighing 18.66 pounds for second place.
Third place went to the team of Craig Koenig and Shane Koenig of Bismarck, North Dakota, weighing in five fish at 17.35 pounds. The fourth place team was Derek Gouldin and Jeremy Blazek of Hibbing, Minnesota, who weighed six fish at 16.27 pounds.
The fifth place finishers were Chris Kassube of Bath and Kevin Nehls of Groton, who brought in six fish at 15.62 pounds.
C.R. Nedved of Rapid City and Chuck Nedved of Kimball took sixth place with six fish weighing at 15.09 pounds.
Seventh place finishers, Leo Votja and Danne Schlomer of Glenham, brought in six fish for 14.04 pounds and eighth place finishers Blake Friend and Jesse Krein of Selby, weighed six fish at 13.93 pounds.

Jason Gill of St. Joseph, Minnesota and Robb Ruegemer of St. Stephan, Minnesota, weighed six fish for a total of 11 pounds and finishing in 20th place were Kevin Krueger and Dan Krueger of Groton, with six fish weighing 10.92 pounds.

Mobridge anglers Marty Gienger and Terry While weighed in six fish at 10.64 to finish in 21st place and Larry and Kristi McClure of Volga, weighed six fish at 10.41 pounds to finsh 22nd.

The Mobridge team of Darrell Hoverstadt and Jolene Hoverstadt brought in the biggest fish at 9.73 pounds.
Lonnie Kracht of Spearfish won the side-by-side grand prize package.
“As a committee we are very pleased with the success of the tourney,” said Rick Bolduan, Tourism Committee member and MC of the tournament events. “With everything going on in the world today and the past year, this was a really big boost for our local economy and our area.”
Having the tournament in January when other tourism events are on hold for during the cold months, brings welcomed revenue into the city through the hospitality and retail industries especially after the pandemic year of 2020.
“I feel everyone was well informed of our precautions and adhered to our stipulations,” he said. “Ice conditions were not the best but everyone was careful and there were no serious instances.
Bolduan said it was great that Duncan and Schlomer take home first place.
“I was very happy to see the fish Levi and Quintin caught,” he said.  “They have supported our tourney for many years and have placed high in past, it was really good to see they finally tied it all together for the win!” The 2022 tournament and expo are set for Jan. 13 through 15.