Many S.D. teachers on their own when adding safety barriers in classroomsFree Access 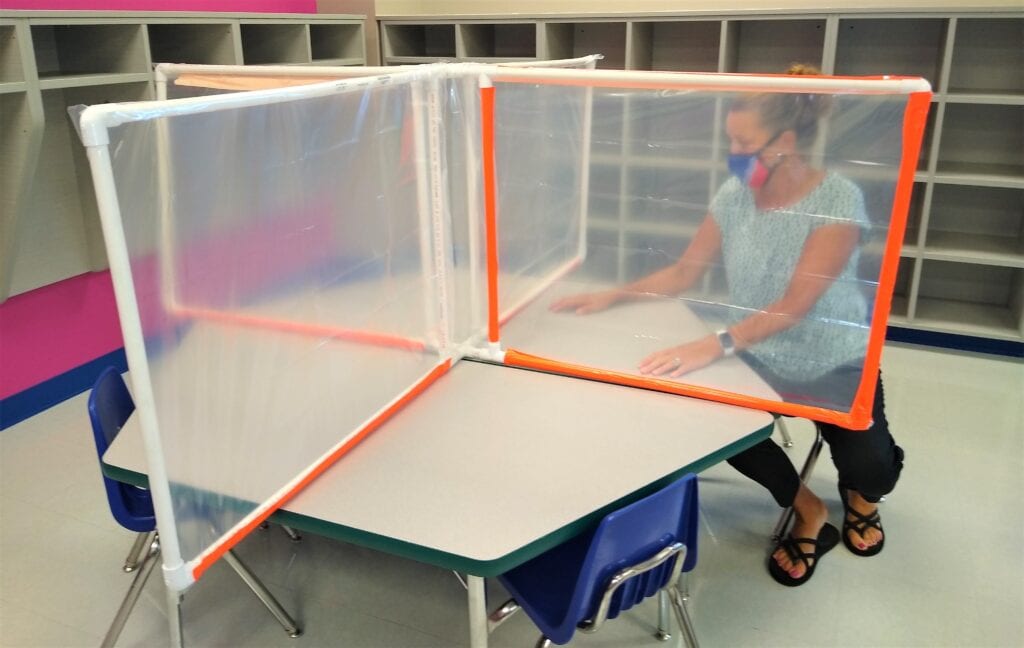 Tracy Vik, principal of Sonia Sotomayor Elementary School in Sioux Falls, sits at a desk in a school classroom where protective barriers will be present when school starts on Aug. 27. Custodians at the school helped build barriers for some classrooms. Photo: Courtesy Shelly Conlon, Sioux Falls Argus Leader

South Dakota public school teachers are largely on their own when it comes to building and installing protective barriers for their classrooms that may reduce the spread of the coronavirus among their students and themselves.

With no statewide policy in place, and little or no guidance from individual school districts, thousands of teachers across the state have had to use their own time, money and ingenuity to get barriers or partitions in place before students return to the classroom in late August or early September.

In a school year laden with uncertainty due to the COVID-19 pandemic, the question of whether physical barriers will be in place in school classrooms — and how they should be built, installed or paid for — has generally not been addressed in back-to-school plans approved by each district. While most districts provided direction on whether mask use would be required, and many reconfigured classroom spaces to meet social-distancing guidelines, barrier use was left out of most planning discussions.

Some teachers have spent their own money to use plexiglass or plastic film held up by wooden dowels or PVC pipe to create vertical barriers that aim to reduce the spread of the airborne virus from student to student and from student to teacher or vice versa. Some schools have received funding, supplies or manpower from churches or local businesses to help make barriers. A few schools have ordered barriers built by inmates in the Pheasantland Industries construction business operated by the state Department of Corrections. Some individual schools have implemented efforts to build and install barriers.

Students are likely to see a menagerie of homemade and hand-crafted barriers in some classrooms and no barriers at all in others. Many school districts have not given teachers money or supplies to build and erect the barriers.

School districts were under strong pressure, including from Gov. Kristi Noem and in some cases parents, to return to in-person teaching this fall after closing early in the spring when the pandemic hit. Many have allowed parents to select a remote-learning option if they do not feel safe sending children back to school.

Teachers, however, have not generally had the option to avoid returning to the classroom by teaching remotely. Most districts have built a completely remote-learning option for teachers and students in their fall plans, but only if major outbreaks occur.

The lack of a consistent statewide policy or local guidelines regarding physical barriers and other personal protective equipment has placed another stress upon teachers in South Dakota, many of whom are worried about the health of themselves, their families and their students as they return to in-person teaching and learning amid a pandemic, said Loren Paul, president of the South Dakota Education Association.

“It’s basically survival at this point; it’s whatever you can do to make your classroom as safe as possible,” Paul said. “There’s no easy answers, but it would be nice if there were more answers for our teachers about masks and PPE in the classrooms.”

Paul said he has heard from members of the union who don’t feel supported by school districts, and the lack of mask requirements and guidance regarding barriers in classrooms has enhanced that sentiment. He said classrooms could have been made safer if districts had begun planning earlier and invested more time and money in protecting teachers and students.

“The teachers are the ones on the front lines right now, and I just feel for them,” Paul said. “They’re doing whatever they can to make things safer, but if you’re trying to get dividers for your elementary classroom right now, you go online or to the hardware store and those materials are not available now.”

Teachers in the Sioux Falls School District have been given a high degree of flexibility when it comes to adding protective equipment to their classrooms, said DeAnn Konrad, community relations supervisor for the district.

The district has installed plexiglass barriers in offices and other areas where face-to-face contact is likely, but does not have a policy in place in regard to whether or how barriers can be installed in classrooms, Konrad said.

The district’s approach has been to layer several elements of protection from the virus on top of one another in hopes of creating the safest environment possible, Konrad said. Mask usage will be strongly encouraged when students return to classes on Aug. 27 and 28, and the district has upgraded the filters in its air-circulation system, she said.

Principals are playing a lead role in determining what barriers are allowed in classrooms, Konrad said. With 25,000 students, 3,500 staff members and buildings of all different sizes and layouts, Konrad said flexibility was required.

“I’ve gone around to various classrooms, and you see something different in every single classroom,” she said. “Is one better than the other? We don’t know because there’s not been a scientific study on what works best.”

Konrad said the district has a warehouse of supplies, including some protective equipment, that individual teachers and schools can request for use. She also noted that federal Centers for Disease Control and Prevention guidelines on school safety stress the importance of social distancing and mask usage but do not mention barriers or partitions as necessary protections.

“I’m not sure how much we know about whether partitions are effective or not,” she said.

The CDC does note, however, in a section on its website called, “Operating schools during COVID-19: CDC’s Considerations,” under a subsection titled “Physical Barriers and Guides,” that partitions can be helpful in reducing the spread of the virus.

The CDC recommends that schools “install physical barriers, such as sneeze guards and partitions, particularly in areas where it is difficult for individuals to remain at least 6 feet apart,” though the section does not specifically reference classrooms.

Konrad said the district has looked at installation of barriers and partitions in classrooms as something that teachers can do if they feel safer or more comfortable doing so, not unlike a teacher bringing in a lamp to provide more lighting in a classroom.

“There isn’t anything that anyone would be required to have that we haven’t provided to them,” she said.

In Rapid City, where school resumes in early September, teachers are also being given leeway in any protective measures they want to install beyond what the district has done to increase protection from the virus, said spokeswoman Katy Urban.

“We’re going to see some cases where teachers take some liberties to make it safer, and we’re fine with that,” Urban said. “There’s going to be a lot of freedom in that.”

In addition to requiring masks when inside buildings, the district has reconfigured classroom seating and removed unnecessary furniture to increase social distancing. It also is providing water bottles to students to end the use of public water fountains.

Classrooms will also be cleaned and sanitized often each day, she said. Using plexiglass barriers increases the area that needs to be cleaned regularly, Urban said. She also said the district cannot afford to provide plexiglass to all teachers to install in their classrooms.

“Plexiglass is one more thing for people to clean and we’re not sure, given the price, how effective that would be,” she said.

Urban said the district spent about $135,000 in funding from the federal CARES Act on protective equipment and another $40,000 for plexiglass to install barriers in office areas where close contact is likely. Overall, South Dakota schools received $47 million in CARES Act funding for the coming year.

Some plexiglass barriers will also be installed in classrooms where social distancing is impossible due to building design or instructional need, such as in speech classes where students stand together and project their voices.

School principals have been given flexibility in deciding how some safety measures will be implemented as long as they remain within the district’s general guidelines for the upcoming school year, Urban said.

The district will not allow any flammable materials, such as shower curtains, to be used as barriers in classrooms, Urban said. Some teachers are putting tape around their desks to create a no-go zone around them to increase distance between themselves and students when up-close teaching occurs.

“District guidelines were set forward to create as much space as we can,” she said. “Other than that, it’s really up to the teacher and the principal to determine how things will work in their building. Every school has an individual plan based on their layout and things they can do.”

Despite the best efforts of school districts to keep teachers and students safe, some educators remain concerned that in-person learning will carry significant risks this fall, said Paul, the union president.

“Teachers want some more guidelines, but probably they want more support than guidelines,” Paul said. “In March, April and May, our teachers were heroes. Now they’re just trying to throw the teachers back in the classroom without masks or anything, and teachers are saying, ‘Hey, wait a minute, we’re worried about our safety and the safety of our families and of the children.’”

Family of victim in attorney general crash worry if investigation will be thoroughS.D. election officials say vote-by-mail and voting at polls will be safe and fairConcerns arise over merger of S.D. agricultural and environmental agencies