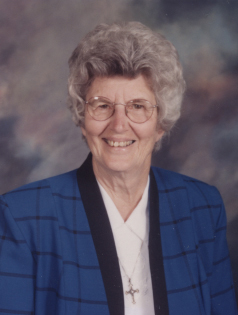 Maria Theresa Schlomer (nee Fischbach), was welcomed home to heaven on Sept. 5, 2019, at the age of 100.
Funeral services will be at 10 a.m. on Saturday, Sept. 14, 2019, at Zion Lutheran Church with visitation one hour prior to the service.
A prayer service will be held at 7 p.m. on Friday at St. Jacobi Lutheran Church in Glenham with visitation starting at 5 p.m.
Maria was born on April 11, 1919, in Faith, to Michael and Theresa (nee Hoffman) Fischbach. As an infant, she was made a member of God’s family through baptism. Maria loved horses and growing up on the family ranch in Faith. Her father was a rancher, and each of her parents had emigrated from Europe at the age of 16, alone and not knowing the language. Maria demonstrated that same strength and independence throughout her life.
Maria attended South Dakota State College (now University) and graduated with a Bachelor of Science in home economics. She taught home economics and math in Glenham and Mobridge to three different generations, separated by years devoted to raising her family. She was active in 4-H as a child and later led 4-H groups.
Maria married Walter Schlomer on June 4, 1944, after each of them prayed for a Christian spouse. Their married life exemplified a Christian marriage. In 1945, Maria’s godchild, Bill Holz, came to live with them and was later adopted. In the next 12 years, Maria and Walter had seven additional children.
Throughout her life, Maria showed her love for the Lord in the way she served Him and others. Each day on the farm started with morning devotions around the breakfast table and ended with bedtime prayers. She was very active in her church by playing the organ, directing the choir and teaching Bible school and Sunday school. One of Maria’s favorite things was to have her family gathered around her singing. You’d hear her love of music when she recalled a familiar tune, which usually ended in a songfest. Maria loved to serve others by visiting shut-ins and sharing her baked goods or garden bounty, even into her 90s with the “elderly” who often were younger than she. She was always willing to be the chauffeur to friends no longer able to drive. To God be the glory!
Maria was preceded in death by her parents, Michael and Theresa Fischbach; her husband, Walter, in 1990; her brother, Andrew Fischbach; many brothers- and sisters-in-law; and one great-grandchild.
She is survived by her children, Bill (Ardie) Holz, Larry (Marlene) Schlomer, Lorna (Arnold) Lemke, Dorotha (Willis) Hall, Mary Ann (Jason) Person, Jane Johnson, Michael (Becky) Schlomer, and Danne (Colleen) Schlomer. She is also survived by 25 grandchildren, 34 great-grandchildren, one brother-in-law, one sister-in-law, and many nieces and nephews.
Memorials are preferred to WELS World Missions or the Walworth County Care Center in Selby.