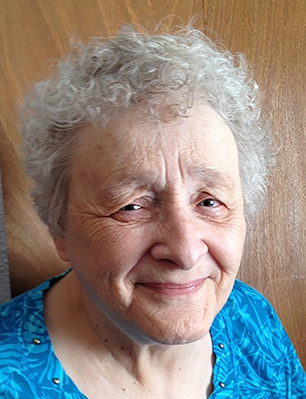 Marilyn “Nana” Pauline Meckle was born on Aug. 22, 1941, in Mobridge. Her parents were Daniel and Martha (Debbert) Hintz. Thirteen years later, Vernon joined the family, whom Marilyn helped raise after they mother died in 1963.
She graduated from Mobridge High School in 1959. Marilyn married in June 1959. They lived on numerous ranches. On Oct. 1, 1967, they adopted Tracy (Aug. 1, 1967, through June 26, 2006, she died in a motor vehicle accident). They later divorced. Marilyn raised her granddaughter, Jasmine, who was her pride and joy.
Marilyn was a selfless individual, helping many in need, especially her family. She was a wonderful cook/baker. Her family and friends often found themselves with gifts of her “goodies.” She worked in food service of some kind most of her life. She was employed at National Tea, a grocery store. She worked at Dean’s Drive-Inn many years, alongside her nieces. She also worked at Dakota Country. She enjoyed her work at Paylessfoods, and you could find her on the first till chatting with everyone. She cooked at The Depot Coffeeshop. She made many a cheesecake and even sold a few. Due to a stroke, in 2012, she had to retire. Otherwise, she would have continued working.
Her family remembers the wonderful meals and treats she would make including favorites of knoephla soup, strudels, cheesecakes, chocolate popcorn balls, and many more. She would “gift” bowls of knoephla soup for birthdays with the instruction that “you don’t have to share,” that’s for you. That was the same advice she gave if you asked for certain recipes, “no I don’t share, family recipes.” She loved banana bread and always wanted Jasmine or Leann to bring her that treat while at the nursing home in Rapid City.
Her family will miss their beloved Nana, her quick wit and one-liners would break up tension and make everyone laugh. Her faith was extremely important to her, and she could often be found reading her Bible.
This faith provided comfort comfort and direction for her through many difficult times. She lived very frugally and was always willing to give to others.
In 2013, she moved to Belle Fourche due to health reasons. In April 2017, she moved to Rapid City, Avantara Arrowhead, LTC, where she passed away on Nov. 17, 2021.
Marilyn is survived by her brother, Vernon (Leann) Hintz of Belle Fourche; her granddaughter, Jasmine (Mat) Millage of Williston, North Dakota; six other grandchildren, Dakota, Konacin, Freedom, Diamond, Autumn and Alex; nieces and nephew, Ginger Hintz (Ed Gore) of Oakland, California, Hollie Hendricks of Milwaukie, Oregon, Jesse Hintz of Sioux Falls, Cara Sue (Nathan) Krell of Sioux Falls, Kayla Hintz of Sioux Falls, and Daniel (Leah) Hintz of Broomfield, Colorado; great-grandchildren, great-nieces and nephews; and her honorary daughter, Simone Red Bear.
She was preceded in death by her parents, Martha and Daniel Hintz, and daughter, Tracy.
Her memorial service will be held on Monday, Nov. 29, 2021, at 11 a.m. at Cornerstone Community Church in Mobridge.
Kesling Funeral Home of Mobridge is in charge of the arrangements.