James “Murph” Murray, 65, of Leola, entered the spirit world on Saturday, Nov. 16, 2013.
Murph was born May 18, 1948, about 100 years too late. He loved wagon trains, mules and the Native American way of life. The happiest two months of his life were spent on the Centennial Trail in 1989 with his beloved Jeanie and two small Murrays in tow.
Born in Ellendale, N.D., to Marcus and Margaret Murray, Murph hoped to join his cousins and friends in the military after high school, but his lifelong battle with diabetes rendered him ineligible for service. Instead he made his own adventures in Seattle, Wash., New York state (where he attended Woodstock), and all over his beloved South Dakota, including Rapid City and Mobridge, before settling down in Leola.
Over the years, Murph tended bar, rang bells and drove truck. But his greatest job was as father, husband and friend. He married Jeanine Martian on May 19, 1983, and was a fiercely protective father to Marcus Leonard and Myrissa Marie. He was a gentle, patient grandpa to Zachary James and Dylan Thomas. There are many more who called him “Dad,” the friends of his children and the children of his friends.
Murph lived life at a slower pace. Barely able to operate a cell phone, he sewed clothes, blocked hats and crafted walking sticks by hand. Dozens of friends still carry the horseshoe nail crosses he made, or have his beautiful dreamcatchers hanging over their beds. You might run into Murph and find that the person he was deep into conversation with was someone he had only met moments before. Opening doors for shoppers while he rang the Salvation Army bell often resulted in new friendships.
Murph is survived by his wife, children, grandsons, brothers Robert and Paul, sister Mary Tooker, and his nieces and nephews.
He was predeceased by his parents, uncle and two aunts.
He will be missed.
A gathering of family and friends was held Wednesday, Nov. 20, 2013, at Red Rooster Coffee House in downtown Aberdeen.
Schriver’s Memorial Mortuary and Crematory of Aberdeen was entrusted with the arrangements. 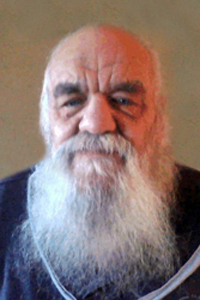