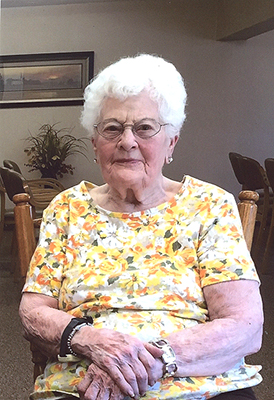 Funeral services for Virginia Laemmle Warwick, 95, of Selby, were held on Saturday, May 21, 2021, at United Church of Christ in Selby.
Virginia passed away on Tuesday, May 18, 2021, at Walworth County Care Center in Selby.
Virginia “Fritzie” Laemmle was born on June 13, 1925, in Mound City, to Gust and Emma (Vollmer) Fritz. She attended Mound City Country School.
Virginia and Otto Laemmle were married on March 22, 1943, in Mound City. They made their home on a farm seven-and-one-half miles southeast of Mound City. She helped Otto on the farm with various chores of a farmer’s wife.
She and Otter were also in a band together. She played the drums and sang, and Otto played the accordion. Virginia could also yodel, play spoons, and she and Otto loved dancing.
In the winter of 1969, they moved to Mobridge. Otto passed away in September 1976. Virginia stayed in Mobridge until moving to Selby in the early 1990s. In 2015, Virginia moved into Walworth County Care Center.
Virginia’s specialty was cooking and baking. She made the best baked rice, dumplings and potatoes, rhubarb cookies, and hot German potato salad. She would bake and then deliver all her goodies around her apartment complex.
Virginia is survived by her sister, Betty Allen of Indiana; two granddaughters, Shelly DeJong of Sioux Falls and Alicia (Arlyn) Ritter of Sioux Falls; four great-grandchildren, Nicole (Scott) Kouf of Sioux Falls, Andrew (Tiffany) Ritter of Sioux Falls, Adam (Angie) Ritter of Sioux Falls, and Adison (Kelsi) Ritter of Watertown; nine great-great-grandchildren, Dylan Kouf of Jamestown, North Dakota, Taylor Kouf of Sioux Falls, Autumn Ritter, Alivia Ritter, Adelynn Wallace and Hailey Wallace of Sioux Falls, Kira Niemann of Watertown, and Ariah and Bode Ritter of Sioux Falls.
She was preceded in death by her parents; husband, Otto; daughter and son-in-law, Sylvia and Ray Litschewski; son, Kenneth James in 1944; and brothers, William and Elmer.