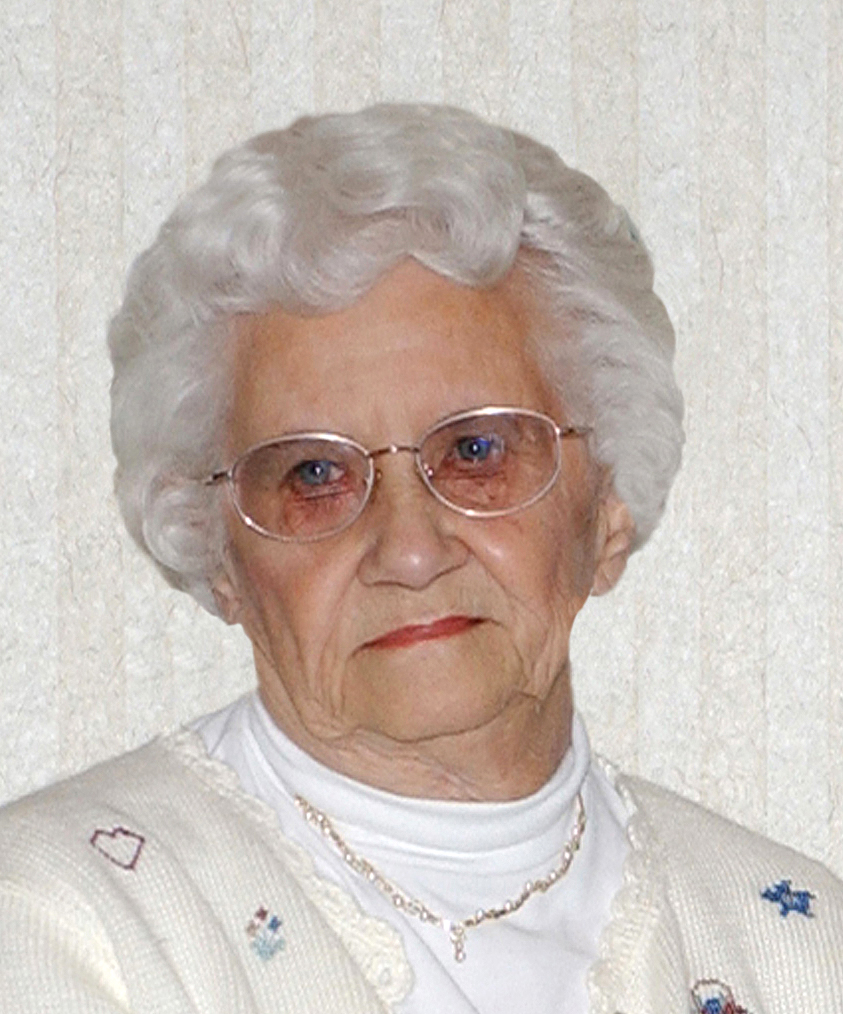 After a brief illness, just short of her 95th birthday, Norma Larson was called home to Heaven on Oct. 13, 2020, at Mobridge Regional Hospital.
Born on Dec. 9, 1925, she was the youngest child born into the large family of Fred and Josephine (Livermont) Cudmore, who ranched near Timber Lake. She attended school through the eighth grade at Madsen School near the ranch, was a nanny in Mobridge for a short time, and then in 1944, moved to Seattle, Washington, to work for Boeing during World War II.
Returning to Mobridge, she worked at a drycleaner before marrying Raymond Larson from Mound City on March 9 ,1947, at Wesleyan Methodist Church in Mobridge, with Ray’s sister, Fern, and her husband, Archie Wessel, as their attendants. Their early married years were spent farming near Mound City and Glencross followed by a move to Aberdeen in 1953 and eventual return to Mobridge in 1955.
In 1957, they purchased a general store on Main Street in Wakpala that was known for many years as “Larson’s Store.” They purchased a new home in Mobridge in 1963 so their boys could attend school there while they continued to operate their store in Wakpala until 1970. Ray passed away on Feb. 27, 1993, and Norma continued to live on her own north of Mobridge on Fourth Ave. East until her passing, always keeping up on the daily activities of her scattered family that she loved and worried so much about. The “Price is Right” and Minnesota Twins baseball were her favorite forms of entertainment.
She showed great control of her four boys as they were growing up and that same gentle love continued on to her grandchildren and great-grandchildren, with another due in 2021. She loved their frequent visits to her home but declined sitting on the floor with them to play games, telling them she could get down, but wasn’t sure about getting back up again. They always compromised. They all loved her gentle, kind, soft-spoken, forgiving and compassionate ways and our family has been able to share her for far longer than any of us expected. She was our anchor.
Proud to have shared her life are her sons, Lyle (Jennifer) Larson of Mobridge, Jerome Larson of Hettinger, North Dakota, Larry Larson of Rapid City, and Gale (Rhonda) Larson of Mobridge. She also leaves behind her grandchildren, Joey, Jesse (Jenny) and Jared (Stephanie) Larson, Heather, Jeremy, Brandon (Katie Jo) and Tyler Larson, Allison (Chris) Gonzales and Brittany (George) Laundreaux; great-grandchildren, Avery, Jalen, Serenity, Wyatt, Devin, Halle and Zachary Larson, Charlee Larson and Owen Beitelspacher, Lucille and Laila Gonzales, Syklee and Rosalie Laundreaux, and Tiffany Stickney. Also surviving are many nieces and nephews who stayed close to her throughout her later years, keeping the Cudmore family history alive – she was the end of an era. Her weekly telephone conversation with Ray’s cousin, Betty (Rumsey) Petrich, from Anaheim Hills, California, will be greatly missed.
She was preceded in death by her husband, Ray; her parents, Fred and Josephine Cudmore of Timber Lake; her brothers, Charles, Walter, Albert (Ernest), Freddie and Grover Cudmore; sisters, Alta (Willis) Whitney, Mae (Bill) Fraser, Melitta (Ralph) Grage, Maxine (Kenneth) Long, and Sarah (Ole) Hulm. She was also preceded in death by Ray’s parents, Arthur and Tilda Larson of Mound City, along with his siblings Fern (Archie) Wessel, Shirley (Terry) O’Rourke and Norman (Leila) Larson.
Per her wishes (and COVID-19), a memorial visitation will be held on Oct. 31, 2020, from 10 a.m. to noon at Kesling Funeral Home followed by a private graveside service with immediate family.
Inurnment will be at Greenwood Cemetery under the direction of Kesling Funeral Home of Mobridge.
Memorial donations will be directed to Trinity Lutheran Church in Mobridge and Norway Lutheran Church, Glenham.