Only one cooking mishap, but the outcome was ‘sweet’

As he rides the currents of the Mighty Mo’ in his ocean kayak, fishing for walleye, Jordan Erdman often wonders what other fisherman think of his choice of fishing craft and of him.

“Do they think I’m some kind of hippie or something?” he wonders.
In his early 20s, Jordan could hardly be a hippie, but he does concede an ocean kayak may be a rather unconventional fishing boat.
“An ocean kayak is far more stable a craft than a conventional kayak,” he said. “By virtue of their design and their ballasts, I can’t sink.”
Jordan is embracing a new career as the Quick Print Pressman for the Mobridge Tribune and Bridge City Publishing. Operating two different presses, he is in charge of a wide variety of printing projects.
The eldest son of Cleopatra and Bill Erdman, Jordan was born in Hettinger, N.D. and he and his brother Ian grew up in the Lemmon area. Cleopatra was born in New York City and Bill was from California. Mutual friends from Bismarck introduced the couple who, fell in love and were married. Bill is a contractor, who specializes in professional door installation and hardware.  They lived in Morristown, a little town with a population of approximately 60, located 20 miles from Lemmon. The two boys were home-schooled until high school. Jordan graduated from McIntosh High School in 2008, when he joined the family business. The family moved to Mobridge several years ago, and Ian is a junior in the Mobridge-Pollock High School.
Jordan concedes that both his parents are excellent cooks, with his dad being a bit better than even his mom. His love for cooking begins with his love of gardening.
“We always had a huge garden with at least a half an acre,” he said. “However, since we moved to Mobridge, we’ve had to economize on space.”
They always plant tomatoes with a preference for Heirloom tomatoes.
“They’re sweeter and seem to be more resistant to blight,” he said.
Starting quite by accident, they brought home a six pack of plants that had been mislabeled Big Boys.
“They were pink and I wish I knew what kind they were, because they were great,” he said. “But like I said, they were mislabeled.”
Any good garden begins with proper soil preparation and the Erdman family favor all things natural with good aged manure applied in the fall.
“We’ve always been lucky to have good friends who have a farm,” he said. “If the manure is aged, you won’t have a problem with weeds. And crop rotation is vital.”
Yukon Gold and Norland are their preference for potatoes with Yukon Gold making the very best mashed potatoes.
“The skin is so tender, you don’t even have to peel them,” he said.
In the past, he said, they’ve cultivated strawberries and gooseberries, which make great pies.
He doesn’t cringe when discussing his only culinary catastrophe, it was simply a learning experience.
While visiting his uncle in California, he was placed in charge of grilling a fine beef roast. He mistook the salt shaker for the sugar shaker and liberally applied a rub consisting of basil, oregano, pepper and sugar into the roast before placing it on the grill.  The roast burst into flames, which seared into a lovely sugary coating. Actually quite delicious, he said, although he decided against replicating it.
In addition to fishing, Jordan also enjoys deer and pheasant hunting and preparing a feast for the family.
He enjoys cooking ethnic cuisine including Tai and Italian, and, although German in heritage, he doesn’t enjoy doughy German fare like knoepfla.
He enjoys long walks with Molly, the family’s Border Collie and Blue Heeler cross. Lately he has been sharpening his riding skills, astride Pepper, a blue roan owned by a friend of the family. 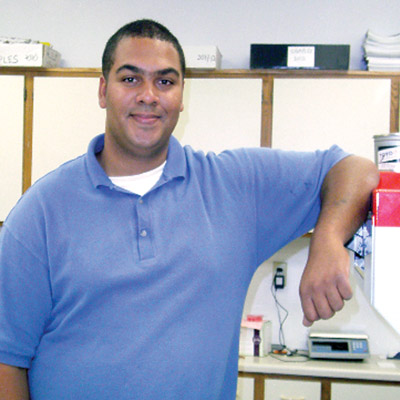