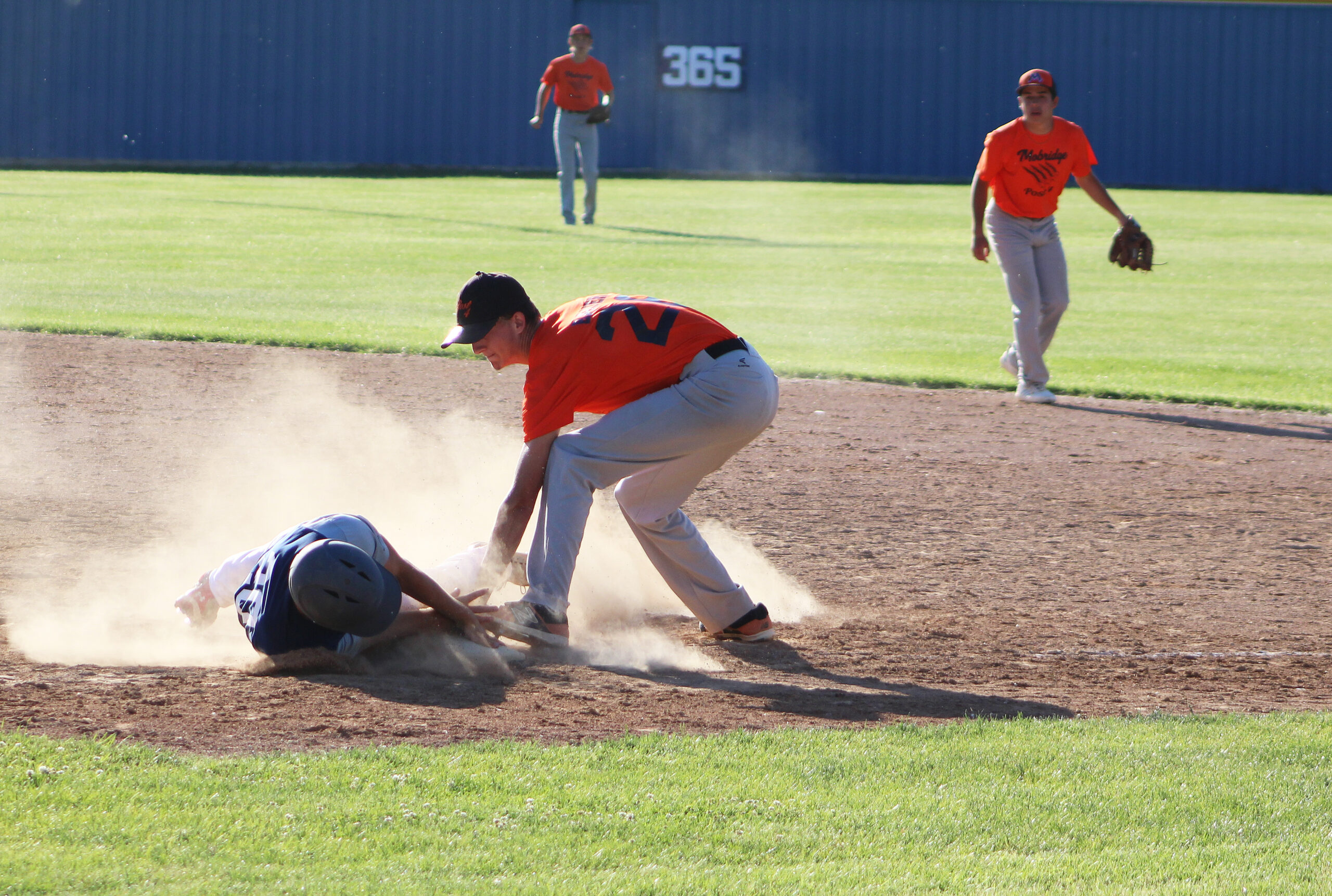 Lamoure used a nine-run fourth to defeat Post 4 12-2 in Lamoure, North Dakota, on Tuesday.
The game was tied at 2-2 when Lamoure came up with five hits that produced nine runs in the fourth inning, including three two-RBI knocks.
Post 4 pitcher Gavin Reinert had held Lamoure to single runs in the first and third before running into trouble.
The Post 4 offense was not much help. Their only runs came in the third inning when Braden Goehring singled, Trace Cerney walked and Wade Begeman followed with a two-RBI triple. A Holden Eisemann single in the fifth was the team’s only other hit.
Lamoure pitcher Gentzkow shut Post 4 down, surrendering three hits while striking out seven. Klever led the offense, going three-for-three with two doubles and three RBIs.
The Post 4 Juniors put up a stronger fight but fell 8-6 in the second game.
The Juniors are the younger Legion players with older players sprinkled in to make out the team.
Lamoure jumped out to a 4-0 lead in the first inning.
Mobridge fought back with three runs in the second and two more in the third to take a 5-4 lead, but Lamoure answered with three runs in their half of the third before adding a run in the fourth. Mobridge scored one run in the fifth and had the tying run at the plate before the game ended on a fly ball.
Lamoure miscues helped Mobridge get started in the third. Blaise Thompson walked before Bryston Goehring and Noah Bauer reached on errors. Jesse Bearsheart made the errors hurt when he laced a bases clearing double. Brenden Begeman got hit by a pitch and Thompson walked, setting up Bryston Goehring’s two-RBI triple in the third. Mobridge got one more back in the fifth when Braden Goehring tripled and Jack Faehnrich drove him home with a single.
Holden Eisemann took the loss of Mobridge.
Mathern earned the win over Lamoure. Madke led the offense with two hits and two runs scored.

Lake Norden
Lake Norden broke away from a 4-4 tie with a three-run fourth and held of Post 4 8-6 in Lake Norden on Saturday.
Lake Norden led 2-0 when Post 4 broke out a four-run third inning. Braden Goehring started the rally with a double. Reese Cerney drove him home with a single. After Trace Cerney was hit by a pitch and Wade Begeman walked, Cayden Eisemann drove in a run with a ground out. Gavin Reinert walked, followed by Noah Friend getting an RBI the hard way when he was hit by a pitch with the bases loaded. Begeman tied the game at 4-4 when he scored on a wild pitch.
Lake Norden answered with two runs in the bottom half of the inning.
The home team took the lead the next inning when an error and a walk set the stage for three runs. Lake Norden added a run in the sixth to take an 8-4 lead.
Post 4 had a two-run rally in the seventh. Wade Begeman singled and Gavin Reinert reached on a hit by pitch. Both runners came around to score on stolen bases and wild pitches, but Post 4 could not complete the comeback.
Noah Bauer was the tough luck loser. He threw 3.1 innings of seven-hit ball, surrendering seven runs (five earned), walking five and striking out four.
Reese Cerney was the only Mobridge player to pick up two hits in the game. Begeman, Eisemann, Goehring and Zane Reinert had the other hits. Begeman scored twice.
Cooper earned the win for Lake Norden and drove in three runs. Jackson and Mitchell had two hits and scored three runs each.
After a low-scoring first three innings, Lake Norden took off for and 11-4 win over the Post 4 American Legion Juniors.
Mobridge scored late, but one run in the sixth was answered by four Lake Norden runs. Two more Mobridge runs in the seventh did little but cut the difference to seven runs.
Braden Goehring led Mobridge with two hits, one run scored and one driven in. Faehnrich, Blaise Thompson and Jackson Eisemann added hits. Eisemann scored two runs.
The Juniors host the Pierre 15-16 Teeners at Legion Memorial Field on Friday. Game time is approximately 7 p.m. after the Mobridge 13-14 Teeners host the Pierre 13-14 Teeners. That game starts at 5 p.m.
Mobridge has a busy week ahead. They play Kidder County in Steele, North Dakota, on Thursday. The Juniors square off against the Pierre 15-16 Teeners on Friday at 7 p.m. Post 4 hosts Ipswich on Tuesday at 5 p.m.