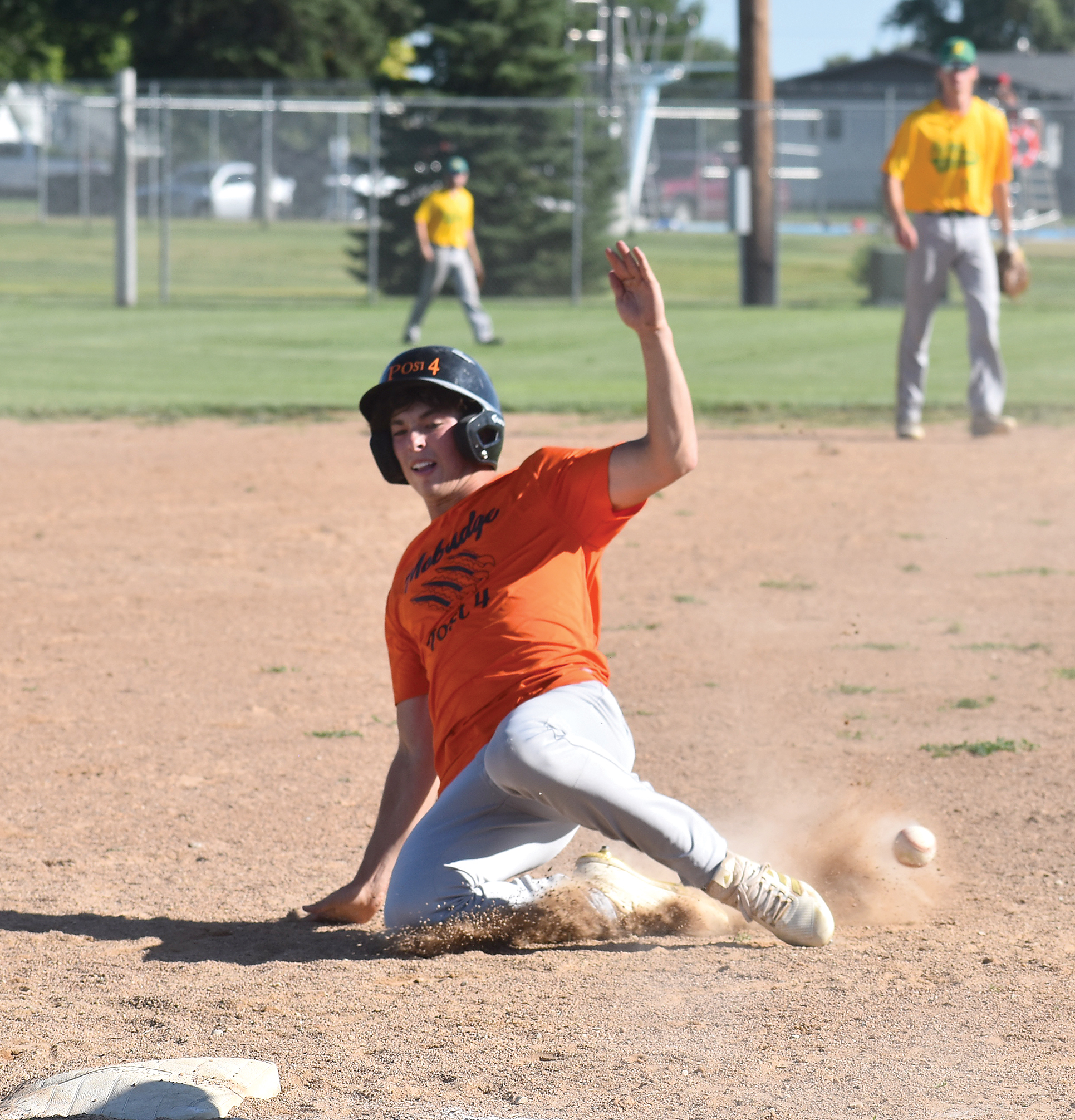 Mobridge Post 4 ended the season with a pair of wins in Claremont on Thursday. Post 4 beat Post 262 9-4 in the opener and 13-4 in the nightcap.
A five-run third inning was the deciding factor in the 9-4 win. After Mobridge scored twice and Claremont once in the first inning, Mobridge pulled away in the third inning. Wade Begeman started the rally with a double. After a Bryston Goehring walk and both players advancing, Trace Cerney came up with a 2-RBI single. Jack Faehnrich walked before Holden Eisemann plated Cerney with a single. Two outs later, Gavin Reinert and Jackson Eisemann hit back-to-back singles to score the next two runs.
Claremont drew back to within 7-4 before Mobridge put the game away with two runs in the fifth.
Cerney handled Claremont with five innings of four-hit ball to earn the win. He struck out seven and walked six. Bryston Goehring and Faehnrich led the offense with two hits each, while Goehring and Cerney had two RBIs each. Begeman scored a team-high two runs.
The internet went down before Post 4 won a 13-4 game in the nightcap (team uses an app for scorekeeping), but coach Donovan Flaherty provided a bit of insight.
Mobridge scored one or two runs in each of the first two innings before pulling away in the fifth and sixth innings and putting the game away with a four-run seventh.
Gavin Reinert started and earned the win on the mound. Wade Begeman pitched the sixth and seventh to earn the save

Lamoure
Post 4 lost in an extra long game and won an extra short game over Lamoure, North Dakota, at Legion Memorial Field on Wednesday.
The Mobridge nine lost a tough 7-5 10-inning game in the opener. With the game tied at 4-4, Lamoure used a single, a Mobridge error and two walks to string together three runs and take a 7-4 lead.
Mobridge tried to answer. Wade Begeman walked and scored on a Bryston Goehring single. Gavin Reinert singled after that, but the potential tying runs could not come around to score.
Post 4 took a 2-0 lead when Braden Goehring doubled and scored on a Reinert hit. Reinert scored on a Jack Faehnrich knock.
Noah Fried led off the fifth with a base hit and scored on a Reese Cerney hit to give Mobridge a 3-0 lead.
Lamoure tied the game with a three-run rally in the sixth. Bierman and Gentzkow had the big hits.
Lamoure took a 5-4 lead in the top of the ninth on an RBI single by Sandness, only to have Mobridge tie the game in the bottom half when Noah Bauer tripled and pinch runner Simon Fried stole home.
Faehnrich was the tough luck loser on the mound. He threw 9.2 innings of six-hit ball but the unearned runs in the 10th deflated his well-pitched outing.
Cerney, Bauer and Reinert had two hits each to pace the offense. Begeman, Braden Goehring, Reinert, Noah Fried and Simon Fried scored the runs.
Bierman had two hits and Zwiner scored twice to lead Lamoure. Hansen earned the win in relief of Gentzkow.
After going 10 innings in the opener, the nightcap was a short and sweet 2-1 win in a three-inning game. After Lamoure scored in the top of the second, Mobridge answered with two runs in the bottom half. Holden Eisemann and Simon Fried had singles to set up RBI hits by Blaise Thompson and Wade Begeman.
Brenden Begeman earned the win, pitching the first two innings. Trace Cerney pitched the third to earn the save.

Lemmon
Noah Bauer tossed a gem to give Post 4 a 3-0 win over Hettinger/Scranton/Lemmon/Bowman in Lemmon on July 14.
Bauer threw a six-inning shutout, scattering six hits, while striking out seven and walking two.
HSLB pitching was nearly as good. The game was tied at 0-0 before Mobridge struck for three runs in the top of the sixth inning.
Reese Cerney started the rally with a leadoff double. Braden Goehring walked and Bryston Goehring singled to load the bases. Wade Begeman singled to score Cerney. Braden Goehring scored on an HSLB error before Bauer sent Bryston Goehring home with a base knock.
Mobridge had just six hits. Begeman and Bauer had two each.
HSLB came back with a 7-5 win over the Post 4 juniors. Mobridge led 5-4 until HSLB scored three runs in the bottom of the fifth.
Noah Fried singled and scored on a Jackson Eisemann hit. Eisemann scored on a Cayden Eisemann single to give Mobridge a 2-0 lead in the first inning.
After falling behind 3-2, Mobridge scored two runs in the fourth to take a 4-3 lead. Brenden Begeman walked and Noah Feyereisen reached on an error, scoring Begeman. Feyereisen scored on a Blaise Thompson groundout.
Mobridge took a 5-4 lead in the fifth when Cayden Eisemann scored on a Jack Faehnrich ground out.
Mobridge had just five hits in the game. Noah Fried and Cayden Eisemann had two each.
Cayden Eisemann, Thompson and Faehnrich took turns on the mound. Thompson suffered the loss.