President elect Leonard Linde called the meeting to order on Monday, August 20, at the Moose Lodge.  There were no guests.  John Badgley announced that the Ambassadors had received two very nice thank you notes.   The County Extension sent their appreciation to the Ambassadors for serving the 4-H Achievement Days meal.  The note from Eureka showed their appreciation to the Ambassadors for serving the meal at their quasquicentennial celebration.  Jan Saylor added that she also received many favorable comments about how nice it was for the Ambassadors to step forward and help with the celebrations in the small communities around Mobridge.
There was discussion about the upcoming Roses for Rotary and what the Rotarian project will be for this year.  Last week when Faye Jackman and Amy Cerney presented the program about the new addition to the library they noted that the community room will need to be furnished.  Rotary decided that furnishing the community room will be the Rotarian project this year.  This may be a two year project depending on the cost.  The furniture for the community room will include a podium, one audio/visual cart, a lighted projection/  magnetic/whiteboard, a projector, two room dividers, five conference tables, 40 stacking chairs and two chair dollies.
Michelle Harrison, executive director of the Chamber, announced that the Live Web Cam on Mobridge.org is now up and running.  This is a project that has taken over a year to complete.  To view the web cam, simply go to Mobridge.org and click on the web cam.  Each picture is on for seven seconds.  She did say that there are so many trees that it is hard to see the buildings but that will change when the seasons change.
John Rothstein won the 50/50 drawing. Rothstein will have the program next week featuring Mayor Jamie Dietterle when Rotary meets at  noon at the Moose Lodge.
The meeting ended with the Rotarians reciting the four-way pledge, which is (1. Is it the truth?  (2. Is it fair to all concerned?  (3. Will it build goodwill and better friendships?  (4. Will it be beneficial to all concerned? 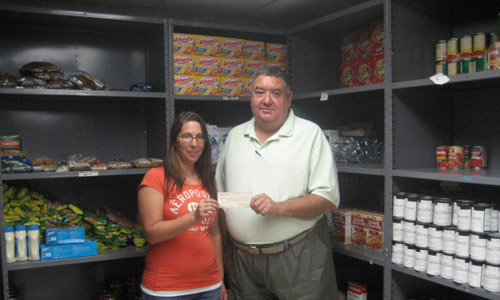