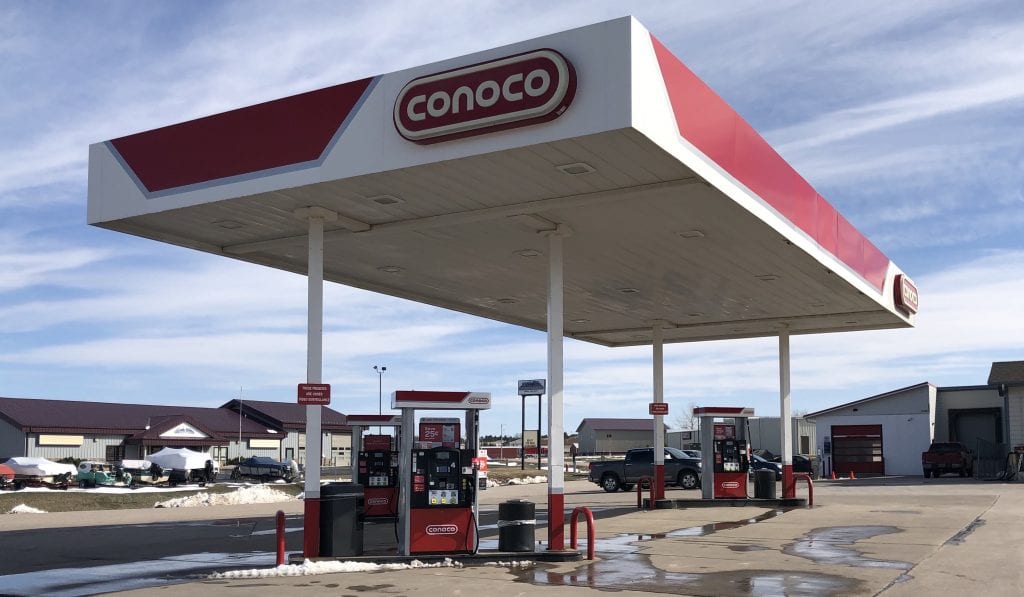 The ethanol industry in South Dakota and across the Midwest is in an economic free-fall due to decreased global demand for ethanol-infused gasoline during the COVID-19 pandemic.

Fear of spreading the deadly virus has led governments around the world to cancel gatherings and urge or require people to stay home, and many individuals are self-isolating to stay safe, significantly reducing the global demand for gasoline.

The pandemic has hit the ethanol industry at a time producers were already suffering through poor market conditions owing to the trade war with China, a glut of oil production during a price war between Russia and Saudi Arabia that sent ethanol prices tumbling and waivers from the U.S. Environmental Protection Agency that enabled American refineries to use less ethanol.

“The important context here is that a lot of the ethanol industry was hanging on by a string before the coronavirus hit,” said Brian Jennings, CEO of the American Coalition for Ethanol, a nonprofit national trade group based in Sioux Falls. “And we’re seeing unprecedented demand destruction right now, so undoubtedly, 2020 is going to be a bloodbath for the industry.”

The market upheaval has jeopardized the jobs of hundreds of well-paid ethanol plant workers in South Dakota and beyond, but has also hurt the financial fortunes of tens of thousands of farmers who provide the corn that is the basis for the biofuel and byproducts such as distiller’s grains.

The U.S. is the top ethanol-producing country in the world, followed by Brazil. In 2018, American plants produced more than 16 billion gallons of ethanol, exporting 1.7 billion gallons to 78 countries. The industry supported 365,000 jobs and added $46 billion to the U.S. gross domestic product.

Across the country, dozens of ethanol plants have closed, gone idle or reduced production as Americans and people across the world have dramatically cut back on driving amid the pandemic. Production levels for 2020 are expected to be down by 4 billion gallons, Jennings said.

About 30 of the roughly 200 ethanol plants in the U.S. have shut down, and another 80 have reduced production by 50% or more, Jennings said.

The Siouxland Ethanol plant in Jackson, Neb., just southwest of Sioux City, Iowa, ceased production in April, and Jennings said the NuGen Energy plant in Marion, S.D., has also gone idle during the market crisis (an employee who answered the phone at NuGen had no comment.)

Redfield Energy in Redfield, S.D., has reduced production to 75% of its maximum capacity amid the market slowdown, said Dana Siefkes-Lewis, chief administrative officer at the plant.

By storing excess ethanol in tanker rail cars or on-site storage tanks, the plant that typically produces 63 million gallons of ethanol a year has avoided laying off or cutting any of its roughly 50 employees, Siefkes-Lewis said. The plant has also transitioned into making hand sanitizer to aid in the battle against COVID-19 and to help keep the plant operating, she said.

“It’s a day-by-day situation, and we are still running but being very cautious about the situation,” she said. “We do have quite a bit of storage on our site, so we think we’ll be able to continue production through the duration of the virus.”

In a typical year, South Dakota farmers produce about 800 million bushels of corn, about 450 million of which are used for ethanol production, 100 million for livestock feed and the rest for global food exports, Richardson said. Many corn farmers are also investors or have some type of financial stake in ethanol plants, she said.

Corn growers were looking forward to a strong growing season in 2020 given the weather so far, but that may not help them if markets for their products don’t rebound, Richardson said. The effects of the ethanol market collapse will be felt far beyond the production plants and farmers who supply them with corn, she said.

“The problem here is unprecedented,” she said. “Corn is your largest commodity in the state, and ethanol is the corn producer’s largest market, and agriculture is the largest industry in the state, so this is very significant.”

Another concern amid the pandemic is whether global supply chains will remain viable and allow for corn and corn products to be distributed to markets around the world, she said.

Consumers can easily see evidence of the reduced demand for gasoline by the lack of motorists on the roads, and by watching the gas price at the pump. Gasoline with 10% ethanol, labeled as “Plus” or “Premium,” has fallen well below $2 per gallon across South Dakota, with prices in the $1.85 range now common in West River and in the $1.60 range in East River for Plus gas.

Global gasoline demand is also way down amid the pandemic. In the United Kingdom, traffic has fallen to 1955 levels, as passenger-vehicle traffic is off 75% and bus mileage is down by 60%.

In Sioux Falls, local streets are seeing as much as 40% declines in vehicle travel, with many traffic counts down by 20% in the past month, according to street-department data reported by the Argus Leader.

South Dakota is the sixth-leading U.S. state in terms of ethanol production, with about 1.2 billion gallons produced in 2019, according to the U.S. Renewable Fuels Association. Iowa is by far the largest producer, with about 4.5 billion gallons a year, followed by other Midwest states including Nebraska, Illinois, Minnesota and Indiana.

South Dakota is home to 16 plants or related facilities, all in the eastern half of the state; depending on size and production capacity, most plants employ between 40 and 60 workers.

Sioux Falls is the corporate headquarters of one of the world’s largest ethanol producers, POET biofuels, which has 27 refineries in seven states, including six plants in South Dakota. In total, POET facilities produced about 1.7 billion gallons of ethanol in 2019 and employed about 1,600 people, including 240 in its South Dakota plants and about 450 at its Sioux Falls headquarters. A spokeswoman for POET said company officials were too busy in early April to grant an interview.

The American ethanol industry arose in 2007 amid a movement to reduce consumption of fossil fuels and develop a renewable source of energy from corn. The United States requires that most petroleum producers blend ethanol into their fuel. Plants began production in South Dakota around that time.

The industry has seen relatively good times since then, with slowdowns tied generally to dips in the American economy, including during the Great Recession in the years surrounding 2008.

The per-gallon price for ethanol hit a national high as recently as 2011, when it reached $2.91 a gallon, according to federal data.

Despite some ups and downs, the demand and prices have generally stalled or fallen sharply in recent months.

In addition to the placement by China of tariffs on American ethanol exports, and the Russia-Saudi Arabia price war that sent prices haywire, the U.S. ethanol market was stung by waivers granted by the Trump administration and former Environmental Protection Agency Administrator Scott Pruitt, Jennings said.

“2019 was a terrible year for the industry,” Jennings said. “We had markets taken away with the China trade war and the price wars, and then domestic markets were taken away through the mismanagement of the Renewable Fuel Standard.”

Pruitt granted scores of waivers to small oil refineries that allowed them to stop blending ethanol into their fuels as required by the Renewable Fuel Standard enacted by Congress in 2005.

“The candid and honest answer is that the Trump administration was looking to do favors to the oil refiners, who have long complained about the fact the Renewable Fuel Standard eroded their market share,” Jennings said.

Jennings sent a letter to current EPA Administrator Andrew Wheeler on Friday, April 3, urging the agency to ensure that the full required level of ethanol to be used by American refiners remain intact despite the overall slowdown in demand and use of ethanol by consumers. He also argued against allowing any more waivers to be enacted.

Siefkes-Lewis said Redfield Energy will do whatever it can to protect its workforce, which she said includes employees with a unique set of skills.

“We know that if we would lay off one employee, we would lose more than that,” she said. “If we shut down the plant, [employees] would need a job and they would have to get a job elsewhere, and we don’t think we’d ever get them back.”

Siefkes-Lewis said ethanol producers are in the difficult spot of knowing that the only possible solution to the market woes — aside from an unexpected return to a high demand for gasoline — is that other producers shut down or reduce production.

“It’s sort of a perfect storm where nothing is in balance,” she said. “We hate to see other plants slow down or shut down, but that may be the only way we can succeed and bring supply and demand back into balance.”

The market for ethanol and prices paid to producers may continue to fall as the pandemic worsens in the U.S., further damaging the industry, Jennings said. Gasoline use is down 40% to 50% in the U.S. already and could fall by as much as 70% in urban areas where quarantine orders are strictest, he said.

“There’s this wishful thinking that there’s going to be this pent-up demand for gas, that once we’re over coronavirus, people are going to want to get out there and drive more and the economy will shoot back up,” he said. “But it’s hard to see the light at the end of the tunnel right now. More shutdowns seem certain, and we’re just going to have to wait and see how long this lasts.”

Still, some producers are staying hopeful that the industry will bounce back once the pandemic passes.

“Summer driving season is close, though I don’t know that people will be out driving this summer,” said Siefkes-Lewis, who was the first employee hired at Redfield Energy in 2005. “But we’ve always been able to come out of it, and I don’t have any doubt that we’ll be able to come out of this one, too. I really believe that, and if I didn’t, I wouldn’t be able to tell our employees not to leave.”