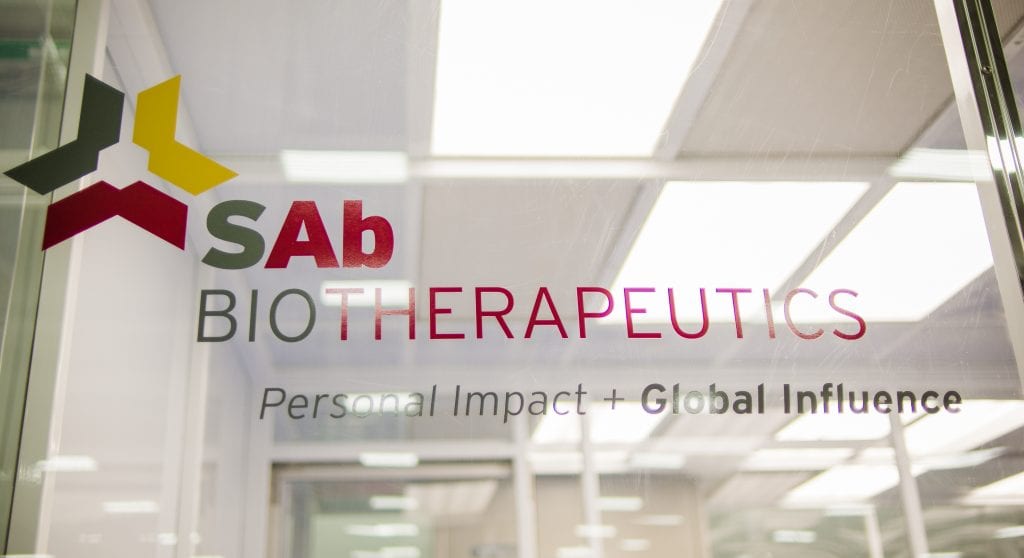 SAb Biotherapeutics is located in northeast Sioux Falls and is working with numerous partners to develop a treatment for people infected with the coronavirus. Courtesy photo

A Sioux Falls company — with its team of scientists and a herd of genetically engineered cows — is working feverishly to develop an effective treatment for people infected with the coronavirus.

SAb Biotherapeutics has emerged as a major player in the effort to produce a viable antidote to the fast-moving virus that is sweeping across the world and the United States, so far sickening more than 140,000 and killing several thousand.

Eddie Sullivan, CEO of SAb, said the company is working on producing a polyclonal antibody therapeutic to coronavirus that it expects will be ready for the pre-clinical and clinical-trial evaluations by the end of the summer, paving the way for a potential treatment shortly thereafter, depending on the pace of regulatory approval.

“The important thing to know is that our capacity and technology allow us to produce a candidate therapeutic more rapidly than any other technology available,” Sullivan said.

If successful, Sullivan said, SAb’s coronavirus treatment has the potential to be extremely effective because it may not only kill the virus but also help to reduce symptoms of the disease. These include fever, dry cough and shortness of breath, which can appear two to 14 days after exposure. Some patients with the disease, especially the elderly and those with underlying medical conditions, can die.

“Our therapeutic will neutralize the virus, because it’s a polyclonal antibody,” Sullivan said. “This is the natural way our bodies respond to disease, so it also works in conjunction with the rest of the immune system to not only eliminate the virus, but to help the patient with inflammation and all the other things associated with activation of the immune system.”

For nearly 20 years, SAb has been developing and perfecting a unique method of using genetically engineered cows as the source from which to harvest antibodies that can fight human diseases such as influenza, diabetes and cancer. The company originated at the University of Massachusetts at Amherst and moved its headquarters to Sioux Falls in 2002, Sullivan said. The company now operates from a site on 60th Street North in Sioux Falls, just southwest of the intersection of Interstates 90 and 229.

SAb is focused on producing antibodies targeted at the SARS-CoV-2 virus, commonly referred to as the coronavirus, which causes the COVID-19 disease that is causing illnesses and deaths.

The virus is now a worldwide pandemic that has infected about 140,000 people and killed more than 4,700 worldwide; South Dakota had nine known cases with one death as of March 13, though Gov. Kristi Noem said she expects cases will increase as the virus takes hold and testing rises.

Polyclonal antibodies are the proteins created by the body to fight invading diseases by creating an immune response that attacks and ideally kills the invading pathogen.

The first big breakthrough by SAb was developing a way to genetically engineer the cows so that rather than producing bovine antibodies, the cows produce human antibodies that effectively fight diseases in people, supplementing their own immune response.

Furthermore, the company has developed an immuno-therapy platform in which the antibodies created by the cows are targeted at specific diseases, potentially making them far more effective and faster than other treatments at fighting specific diseases within a human being.

“What it allows us to do is to vaccinate these animals, or immunize them, in the same way we would to immunize ourselves against influenza or any other type of disease where we’re creating these antibodies inside our own bodies,” Sullivan said. “We’re doing that inside these animals, producing larger quantities of highly targeted antibodies against a disease of interest, and then we’re harvesting those antibodies from the animals.”

The antibodies are harvested from the cows’ plasma within their blood. In a harmless procedure, not unlike with human plasma donors, the plasma is collected from the cows two or three times per month.

Sullivan said the company does not work directly with the actual virus, but rather subunits of the virus that are not infectious, so the animals are not harmed and there is virtually no chance of the process spreading the virus to humans.

SAb had previously developed antibodies it believes will be effective in fighting other diseases related to the coronavirus, including the common flu. None of SAb’s therapeutics has yet to make it to market, though its flu treatment and others are in clinical development, including a treatment for the Middle East Respiratory Coronavirus, a disease very similar to COVID-19.

“You have to know that regardless of whether there is what you might consider an emerging disease, like coronavirus or any other, there are very specific requirements that any company with any candidate product has to go through in order to be able to move it into the clinic,” Sullivan said. “That requires development of the product, testing of the product, evaluation of the safety of the product, and all that must be done prior to initiating a clinical trial and putting it into humans.”

To speed up development of a COVID-19 treatment, the staff and scientists at SAb are working through the complicated processes associated with bringing a treatment to the public by completing as many steps as possible at the same time.

The company recently started producing antibodies targeted specifically at treating COVID-19, Sullivan said. The company is now working with federal agencies such as the National Institutes of Health, the Food and Drug Administration and university researchers to simultaneously go through the process of testing and approval rather than taking those steps in a linear fashion, Sullivan said.

“We have essentially lit up our entire network of universities, government agencies and other partners we have worked [with] in the past in order to not only develop the product, but move it into testing and eventually into the clinic as quickly as possible,” he said. “The speed at which we can move depends upon a lot of these various groups and how fast they can move as well.”

Meanwhile, other companies and scientists are working to develop a vaccine for COVID-19 that would be given to healthy people in order to prevent them from contracting the disease. Both points of attack — preventive vaccines and therapies that treat the sick — are needed to successfully slow or stop a virus from spreading, Sullivan said.

A separate segment of the biotherapy industry is looking for ways to alter or re-purpose existing products to see whether they are effective at treating COVID-19, Sullivan said. SAb is hopeful that any product it develops will be more effective than repurposed medications because its antibodies will be targeted specifically at COVID-19. The final treatment product would likely be administered through an intravenous infusion.

SAb, which has about 50 employees, has found South Dakota to be a great place to perform its research and development of therapeutic treatments, Sullivan said. The environment is ideal for the cows that produce the antibodies, and the region has provided a stable pool of competent researchers and employees, he said.

“Great science happens in South Dakota, and we have the opportunity to do something that can be helpful all over the world,” Sullivan said.