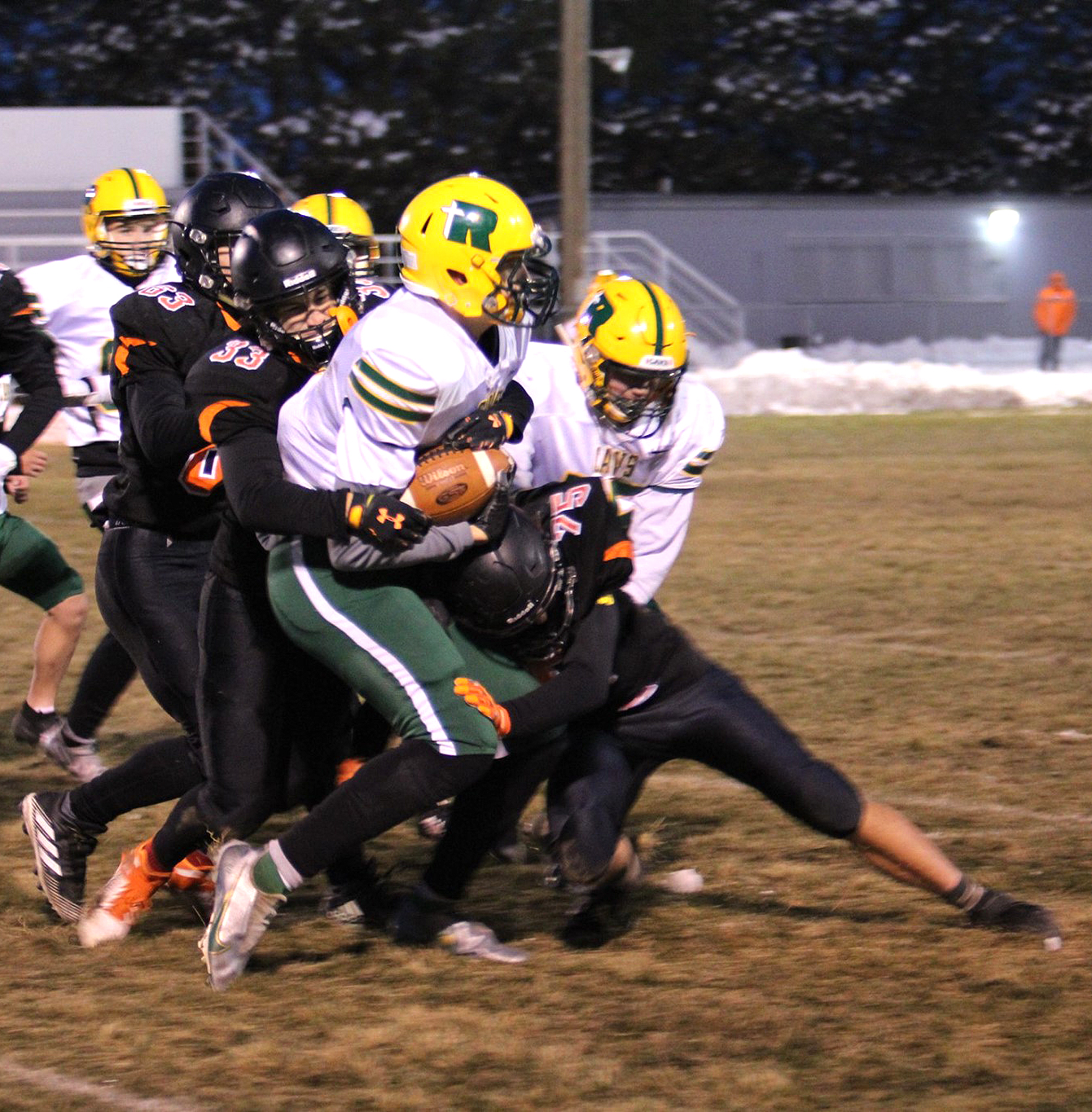 Trace Cerney (33) and Hudson Filler (75) team up to stop Abe Kretchman of Aberdeen Roncalli from getting back to the line of scrimmage on Friday at Tiger Stadium. The Tigers had their way with the Cavaliers in a 54-0 win in the opening round of the Class 11B playoffs.

The weather on Thursday may have slowed down the Tigers, but on Friday, the opposition did not. After the Mobridge-Pollock vs. Aberdeen Roncalli game was postponed for a day because of a snowstorm, the Tigers delivered a storm of their own in a 54-0 win over the Cavaliers at Tiger Stadium.
The Cavaliers came to the Bridge City at less than full strength with injuries to key personnel, including their starters at quarterback and running back. Combine that with the Tigers’ 48-14 win in Aberdeen in early September and the game was a bit of a foregone conclusion.
But that did not mean the Tigers could step back from their goal of being a better team than they were two weeks ago in Redfield.
“We told the kids to focus on the fundamentals,” said coach Paul Goehring. “They played a clean game as far as the fundamentals go.”
Things started going the Tigers’ way quickly. The Cavaliers took the ball to start the game and fumbled on their second snap. Zane Reinert recovered the ball at the 27 and two plays later, the Tigers were in the end zone after Gavin Reinert picked up 12 yards on the first play followed by Braden Goehring taking a quick shovel pass from Cayden Eisemann around the end into the corner for a touchdown.
On the Cavaliers’ next possession, Eisemann picked off a pass and returned it all the way down to the six-yard line. A Gavin Reinert burst up the middle on the Tigers’ first snap put the ball in the end zone for a second time, giving the Tigers a 14-0 lead with 8:39 left in the first quarter.
The lead kept mounting. The Tigers went 40 yards on four runs and scored on a seven-yard Trace Cerney run on their next possession.
Things went from bad to worse for the Cavaliers. Taking the ball on their own 23 on the ensuing kickoff, the Cavaliers lost one yard on their first run, lost 17 yards on a Cerney sack on their second play, and then lost the only five yards they had left when Zane Reinert tackled Ben Rohl in the end zone for a safety.
Getting the ball back, the Tigers went 43 yards in two plays to take a 29-0 lead. Braden Goehring gained 23 yards on a jet sweep on the first play. On the second, Gavin Reinert went off the right side of the line, cut outside and raced to the corner of the end zone for the touchdown.
The varsity continued in the second quarter with Cerney and Gavin Reinert each scoring rushing touchdowns to build the Tiger lead to 42-0.
The Tigers started subbing down after that, but that did not stop the onslaught. A 42-yard drive ended with Gabe Jerome scoring a touchdown with 2:44 left to make the score 48-0, and then after stopping Roncalli on fourth down with 29 seconds left in the half, the Tigers picked up 10 yards in two plays to set up Holden Eisemann hitting Brady Bauer for a 27-yard touchdown that put the game to and end at 54-0 as the second quarter clock expired.
“I’m really happy with the kids that subbed in,” said Goehring. “They did a good job stopping the Cavaliers and then scoring.”
On a night that was not conducive to throwing the Tigers ran the ball 21 times for 226 yards and six touchdowns. Gavin Reinert gained 92 yards and scored three touchdowns on just five carries. Cerney added five carries for 35 yards and two scores.
“I’m really happy with the running game,” said Goehring.
After throwing for 237 yards per game during the regular season, Cayden Eisemann ran for nearly as many yards as he threw. Eisemann attempted just three passes, completing two for 47 yards and a touchdown. On the ground he had two carries for 34 yards.
The Tiger defense simply overwhelmed the Cavaliers. Roncalli finished the game with minus 20 yards rushing on 27 carries and zero for three passing with an interception, while also fumbling twice. The Cavaliers lost yards on 13 of their 30 offensive snaps.
“With the bad weather, we knew the ball conditions were going to be bad,” said Goehring. “In practice we focused on turnover and strip drills.”
Zane Reinert led the Tiger defense with 5.5 tackles, a sack and the aforementioned fumble recovery and safety. Trent Schmeichel had 5.5 tackles and Cole Wellner had five.
As bad as the weather was, there was so much snow the fans who like to park on the east side of field could not see the game from their vehicles, the field itself was in excellent condition. Goehring said that is thanks to the good citizens of the Bridge City.
“The team would like to thank everyone who helped clear the field,” said Goehring. “It’s awesome when the community steps up to help the kids.”

St. Thomas More
The 8-0 Tigers move on to the quarterfinals on Thursday where they will host the 7-1 St. Thomas More Cavaliers. Kickoff is set for 5 p.m.
“This is our biggest test of the year,” said Goehring. “It’s a great opportunity for us to get a win back from when we played them a few years ago.”
Those games were played in 2013 and 2014 when St. Thomas More won by the scores of 56-6 and 45-6. The ’14 St. Thomas More team took second in state.
“They are a run first team,” said Goehring. “They have big, physical backs who run hard north and south. They can also do a lot of things like we do with formations.”