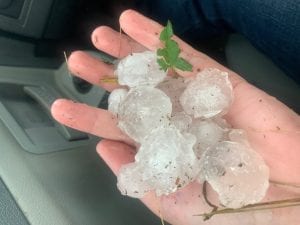 Large hail and damaging winds pounded the area and state Tuesday, Aug. 6, leaving a path of destruction in their wake.
According to Walworth County Emergency Manager Amanda Silbernagel, who along with Walworth County Deputy Travis Bentz got caught in the heart of the storm, it was a dangerous storm that moved quickly and unpredictably. Their vehicles were damaged by the hail, including broken mirrors, taillights and the windshield on the deputy’s vehicle.
Silbernagel said she was about one and a half miles away from Java when the storm caught up to her. It contained quarter to ping pong sized hail accompanied by 60 to 70 mph winds. “I have never seen a wall cloud travel that fast,” said Silbernagel. “I have heard that any crop in the path of the storm from Selby to Java was severely damaged or completely destroyed.”
She said although she has not been able to confirm it, there was a report of baseball sized hail near Java. That reporter said any window on the north side of homes was knocked out by hail and siding was damaged.
Power lines were down and according to Walworth County Sheriff Josh Boll, power was out most of the night. He said MDU was on the scene, but officials were not sure when power would be fully restored. Boll said they were hoping to get a portion of the town back on, but they were working diligently to restore power fully. It might take until sometime today (Wednesday) to get it fully restored. CamWal was also working on outages in the rural area also.
Boll reported the Java and rural areas were hit the heaviest with large hail up to ping pong ball size and strong winds.
“This was due to strong winds and trees taking down lines. One road (southwest of Java) was blocked by downed trees,” he said. “This was also one of the areas of downed power lines in the county.”
The storm also hit West River communities with large hail and damaging winds. Crop and property damage is also being reported in that area.
Other reports confirmed the area that had the most damage in Walworth County was east of Mobridge. Silbernagel said it missed the Akaska and Swan Creek area, but there are reports of damage in the Hoven area. The same storm traveledsouth through South Daktoa causing severe damage in rural areas around Gettysburg, in the Onida area, east and south of Pierre and caused heavy damage in Burke