After winning a couple games with late rallies, the 13-14 Teeners had comebacks thwarted in dropping 8-7 and 13-9 games to Northville in Ipswich on Monday.
“We tried to rally, but we were scoring almost all of our runs in our last at bat,” said coach Chase Schoenhard.
He said the games could have gone the other way, but the team had some struggles on defense.
“We had too many errors,” said Schoenhard.
In game one, the Teeners trailed 8-2 entering the seventh. The first five hitters reached and scored, but the tying run was thrown out at the plate. The bases were loaded with two outs when Mason Schoenhard ripped a line drive, but the Northville third baseman made a lunging catch to end the game.
Ipswich built its lead with two runs in the first, two more in the third and three in the fifth. The eventual winning run scored in the bottom of the sixth. Caden Lenz and Braden Goehring had hits during the late rally.
Mason Schoenhard led the team with two hits. Seven different players scored the Mobridge runs.
Ipswich jumped out early in game two with three runs in each of the first two innings and a seven-run outburst in the third.
Mobridge fought back with two runs in the second and three in the third. They added one in the fourth and three in the fifth, but could not keep the rally going to get all the way back in the game.
Caden Lenz led the Bridge City nine with a hit and three runs scored. Reece Cerney, Caden Eisemann, Jacob Steiger and Caden Halsey added base hits. Jalen Hitland scored two runs.
On Sunday, the 13-14 team, along with three players from the 15-16 team, took the long trip to Lead-Deadwood for a 15-16 double header. Schoenhard said it was a long day, but an excellent learning opportunity for his young players. Playing against a full squad of 15- and 16-year-olds after a 230-mile drive proved too much as Lead-Deadwood won both games by 10-run rule.
The 13-14 Teeners get a break in action. They return to the field on Tuesday when they travel to Northville. The next home outing will be June 30 when Mobridge hosts Selby at Legion Memorial Field.
The 15-16 Teeners are playing in Frederick tonight (Wednesday). 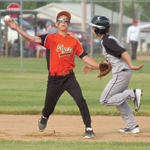