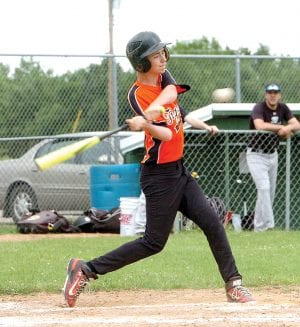 After being soundly defeated in game one, the 13-14 Teeners bounced back to defeat Aberdeen 7-3 in the nightcap at Legion Memorial Field on Saturday.
Aberdeen scored at will in the opener and ran away for 21-0 three-inning win.
Mobridge would have none of that in the second game. Timely hitting and a five-inning complete game three-hitter by Blaise Thompson paved the way for the Teeners’ four-run win.
After Aberdeen took a 1-0 lead in the top of the first, Mobridge took the lead with five runs in the bottom half of the inning. Taylon Carmody walked, followed by singles by Blaise Thompson and Cole Wellner to load the bases. Kobe Good Shield and Jack Faehnrich drew run-scoring walks before Jesse Bearsheart hit an RBI single. Good Shield and Faehnrich scored on wild pitches.
Neither team scored in the second and third innings. Mobridge upped its lead to 7-1 in the fourth inning, using five walks and two wild pitches to plate two runs.
Aberdeen scored twice in the top of the fifth, before Thompson struck out Nick Clemens to end the game.
Brian Holstrom had two hits and scored a run, while Brock Martin singled, walked and scored two runs to lead Aberdeen. Clemens suffered the loss.
Thompson forced seven ground ball outs, while striking out two in five innings work on the mound.
Seven different players scored for the Teeners. Carmody, Thompson, Wellner and Good Shield reached base twice.
Aberdeen scored 10 runs in the first, eight in the second and three in the third in game one.
Martin was the winning pitcher, setting Mobridge down with three straight one-two-three innings, and scored three runs. Also scoring three times were Elan Risage and Lynden Orr. Orr had a triple, single and four RBIs.