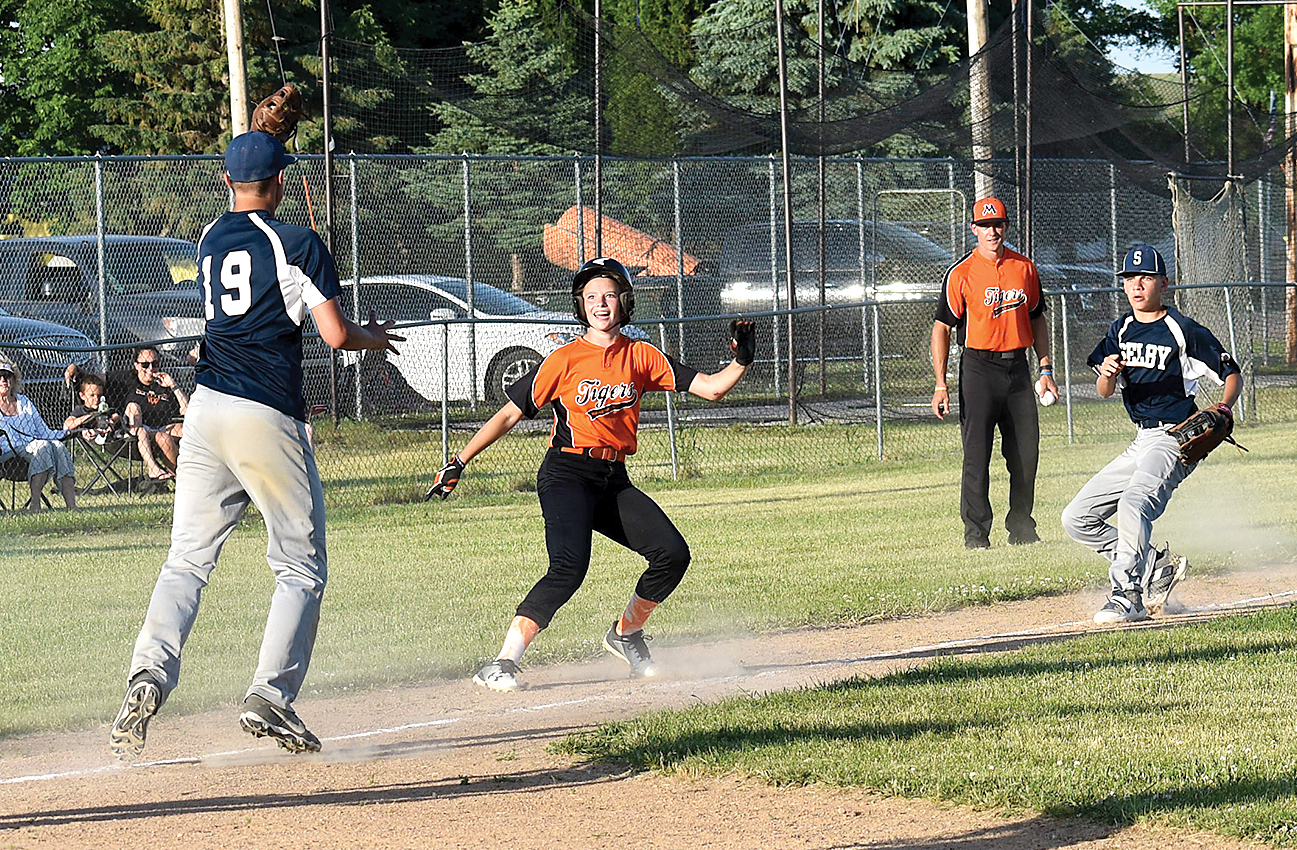 After falling behind 6-1 after two innings, the 13-14 Teeners fought all the way back to win a 7-6, extra inning game over Selby in at Legion Memorial Field on Monday.
Selby scored three runs in the first inning and three more in the second to take the early five-run lead.
Mobridge chipped away at the lead scoring one in the third and two in the fourth to cut the deficit to 6-4.
In the bottom of the sixth, Simon Fried led off with a single and came around to score on a Shane Henderson double. Jackson Eisemann followed with a triple to score Henderson and tie the game at 6-6.
In the bottom of the eighth, Henderson hit a one-out single and stole second and third to get in scoring position for Eisemann, who gave the home team the win with a long single to left-center field.
Grace Overland was the winning pitcher for the Teeners. She pitched the last three innings, throwing scoreless ball while allowing four hits and one walk and striking out two.
Eisemann threw the middle three innings and had nine strikeouts. At the plate he was three-for-four with two extra base hits and three RBIs, including the game winner. Henderson had two hits while scoring the tying and winning runs. Fried had two hits and scored three times.

Lake Norden
The 13-14 Teeners had a tough day on Saturday, falling 14-0 at Lake Norden.
The home team scored early and often, putting six runs on the board in the first two innings before putting the game away with a seven-run third inning.
Mobridge struggled at the plate with just four hits. Shane Henderson led the way with two hits. Jackson Eisemann and Mariah Goehring added one base knock each.

Selby
The 13-14 Teeners dropped two games in Selby, falling 17-7 and 11-9 to their cross-county rivals.
Selby jumped ahead early in the opener with a 14-run first inning. Mobridge answered with four runs in the second and three in the third before Selby put the game away with three runs in the bottom of the third.
Six players had one hit each for the Teeners. Shane Henderson scored twice and Peter Fried drove in two runs.
Trevor Gill led Selby with four RBIs.
Selby again took an early lead in the nightcap, scoring 10 runs in the first inning. The Teeners scored four runs in the top of the first and five more in the second but could not score in the last inning of the three-inning game.
Jackson Eisemann led Mobridge with a double, a triple and four RBIs. Gavin Farlee added a triple and drove three runs home.
Three players had two-RBI games for Selby.

Onida
The 13-14 Teeners took advantage of an inexperienced Onida team to win their season-opener 24-1 at Legion Memorial Field on Wednesday.
Mobridge scored its 24 runs in just two at bats. They sent 20 hitters to the plate in the first inning while scoring 14 runs before having 16 plate appearances and scoring 10 more runs in the second inning.
The Onida pitchers had a rough of it, surrendering nine hits, 20 walks and hitting two batters to get six outs.
Simon Fried came up big at the plate and on the mound for Mobridge. Fried threw three innings of one-hit, one-run ball while striking out six hitters in three innings. At the plate, he was four-for-four with two doubles, three RBIs and three runs scored. Jackson Eisemann had two hits, and RBI and scored four runs. Grace Overland turned four walks into four runs scored. Peter Fried used three walks and a ground out to produce three runs and three RBIs. Sophia Overland had three bases loaded walks, driving in a run with each base on balls.

Pierre here
The Teeners will be on their home turf again on Friday when the host Pierre at 5 p.m. That game will be followed by the Legion Juniors playing the Pierre 15-16 team. On Monday, the Teeners head over the Selby for games against Selby and Leola/Frederick.