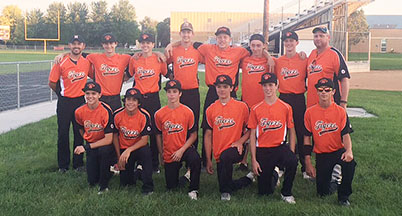 The Mobridge Teeners square off against Dakota Valley in the opening round of the VFW 16U Class A Baseball Tournament, Aug. 3 through 5 in Humboldt.
Coach Corey Eisemann said he knows little to nothing about Dakota Valley except that they are a region champion and should be a very good baseball team. He said the most important thing is his team going out and performing up to their capabilities.
“They’re excited for this,” said Eisemann. “They thought at the beginning of the season that they could be a state caliber team. They accomplished that and they are pretty excited about this opportunity.”
After being an all-offense team in the early going, the Teeners have become a team that pitches well and plays good, smart defense, but the offense was a little flat at times during the regional tournament.
He said if the team goes out, plays well and works hard, good things will come their way.
“That’s all I can ask,” said Eisemann. “If the boys hit the ball like they’re capable of, we can beat anybody because of the way we’re pitching and playing defense.
With the new pitch-count rules, Eisemann said he is going to expect solid performances from his starters.
“We’re going to pitch our starter like he gets his full 95 pitches,” said Eisemann. “It’s a single elimination tournament so we have to win game one before we can worry about game two.”
Noah Bauer, fresh off six and one-third innings of no hit ball in the region win over Milbank, will take the mound for the Bridge City crew in the opener.
The tourney will be played like a high school state tournament with the winners advancing in the winner’s bracket and the losers moving to the consolation bracket.
Mobridge and Dakota Valley play in the 5:30 p.m. game on Friday. Other first round matchups are Volga vs. Beresford at noon, Madison Gold vs. Wagner at 2:30 and host and defending champion West Central vs. Madison White at 8 p.m.
Second round games will be on Saturday with consolation round games at noon and 2:30 p.m. and championship round games at 5:30 p.m. and 8 p.m. On Sunday, the consolation championship is at noon, the third-place game at 2:30 and the championship game at 5 p.m.
Along with the defending champs from West Central, there is plenty of experience playing this weekend. At last year’s tourney, Beresford took second, Wagner third, Volga fourth and Madison White sixth.

Volga
Volga captured the Northeast Region title with an 8-3 win over Mobridge on Wednesday.
Volga scored two runs in the first inning and kept tacking runs on, scoring one each in the second, third and fourth before coming up with a three-run rally in the fifth.
Mobridge countered with single runs in the third, fifth and sixth.
Noah Fried and Bryston Goehring led the Mobridge offense. Fried had two hits, including an RBI single in the fifth. Goehring had a single and a double and scored a run. Cayden Eisemann and Noah Bauer scored the other two runs. Eisemann, Zane Reinert and Cerney delivered one hit each.
Cerney started on the mound and took the loss. He received relief help from Braden Goehring and Gavin Reinert.
Jaxon Schiller earned the win for Volga. Sean Roiger led the offense with three hits. Jake Goodfellow scored a team-leading two runs.