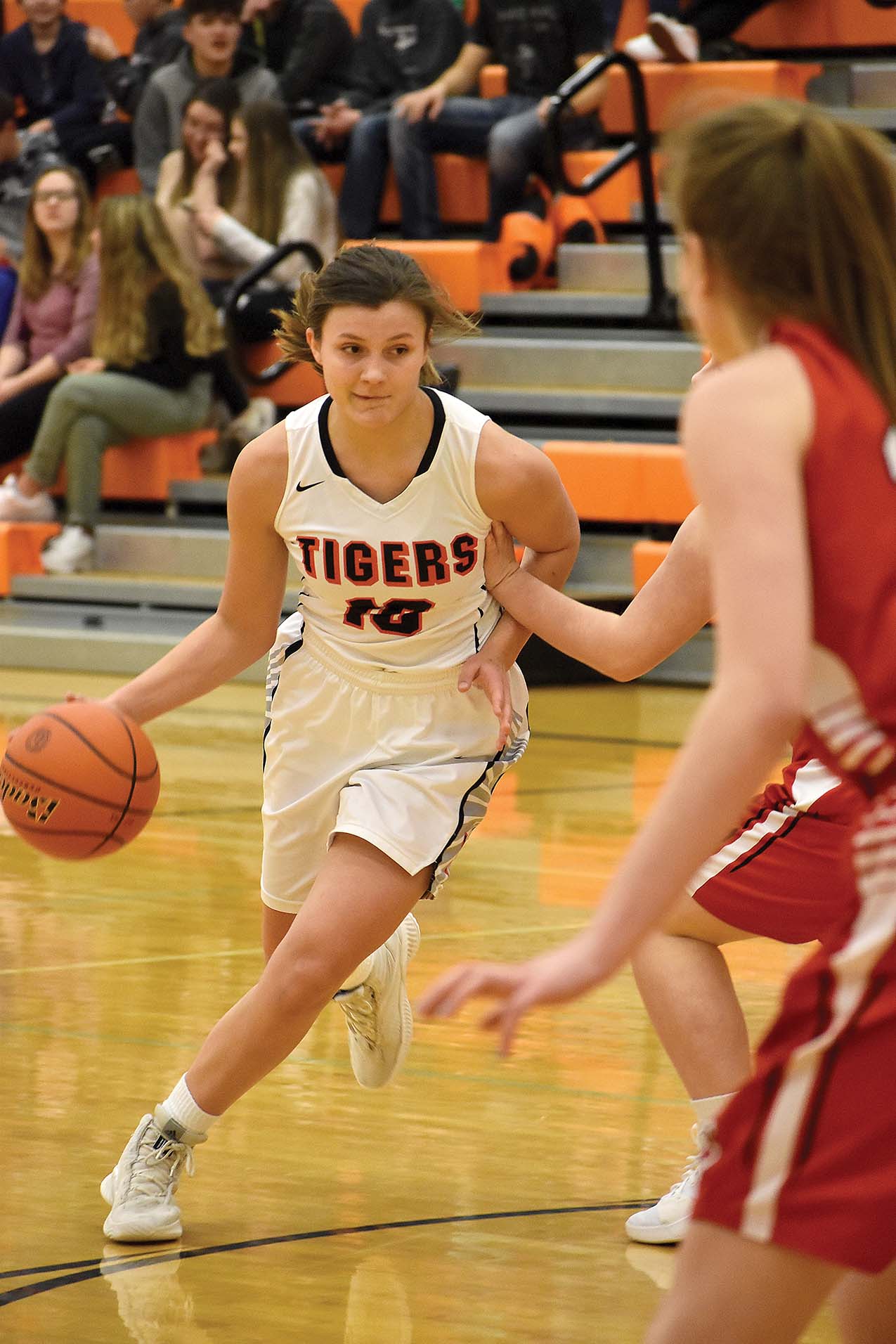 Landyn Henderson led the team in rebounding and was second in scoring during the Lady Tigers’ 10-win campaign.

The Lady Tigers enjoyed a lot of success this year. Under first-year head coach Stephen Hettick, the team won 10 games and had a .500 regular season record for the first time since the 2011-12 season.
Along the way, the Lady Tigers ended a seven-game losing streak against Timber Lake, a nine-game losing streak against McLaughlin and a 10-game losing streak against Cheyenne-Eagle Butte.
The Lady Tigers scored 955 points this year, an average of 45.4 points per game. That is a big jump from a team that averaged 36 points per game one year ago. They gave up more than they scored. Opposing teams scored 1,117 points against the Lady Tigers this year, averaging 53.2 points a game. A big part of the difference came in five losses. Those five losses were against Aberdeen Roncalli, Herreid/Selby Area, Miller, Crow Creek and Winner, five teams who combined to go 86-14 in the regular season.
Senior TyRel Thompson led the Lady Tigers with 197 points. Thompson ends her Lady Tiger career as a member of the 500 club with 510 points.
Sophomore Landyn Henderson was right behind Thompson with 192 points. Junior Megan Zahn was next with 159 points. Freshman Emma Keller was the fourth Lady Tigers to score triple digits with 106 points. They were followed by sophomore Draeya Halsey with 84, freshman Mariah Goehring with 76, sophomore Maya Nobles with 72 and sophomore Keena DeMarrias with 59.
Henderson, Halsey and DeMarrias were the only three Lady Tigers to play in all 21 games. This year. Zahn and Keller played in 20 games, followed by Nobles in 18, and Thompson, Goehring and freshman Emily Hatzenbuhler in 17. Senior Myia Feist’s season was cut short at 14 games due to a season-ending injury.
Thompson also led the Lady Tigers in average at 11.6 points per game. Henderson averaged 9.1 points an outing, Zahn 8.0 and Keller 5.3.
Thompson also led the team with 32 three-pointers, while hitting 26.4 percent of her shots from beyond arc. Halsey hit 18 threes and led the team, hitting at a 36-percent clip. Nobles made 15 threes and Goehring made 14.
Inside the arc, Henderson led the team with 62 two-point field goals and 37.1-percent shooting. Zahn hit 57 twos while shooting 36.5 percent. Keller made 36 two-pointers, hitting 40 percent. Thompson scored 28 twos, shooting 36.8 percent. DeMarrias hit 24 two-pointers and led the team making 42.9 percent of her shots.
The Lady Tigers were a pretty good free throw shooting team with one player hitting more than 70 percent from the charity stripe, three more making more than 60 percent and two more who just missed that mark. Keller led the team with 73.5-percent free throw shooting. She hit 25 of 34 free throws. Halsey was 18 of 26 for 69.2 percent. DeMarrias made 11 of 17 for 64.7 percent. Thompson was 45 of 71 for 63.4 percent. Henderson and Zahn were the players who came up just short of 60 percent. Henderson was 53 of 89 for 59.6 percent and Zahn was 45 of 76 for 59.2 percent.
The Lady Tigers collected 671 rebounds on the season. Their opponents edged them in that category with 719.
Henderson was the leading rebounder with 137 caroms, an average of 6.5 per game. Zahn had 98 for a 4.9 average. Thompson 97 for a 5.7 average. Also getting more than three boards per game with Keller with 75 (3.8) and DeMarrias 69 (3.3).
Henderson also led the team with defensive and offense rebounds. She had 92 on the defensive end and 45 on the offensive end. Following her with offensive rebounds were Keller with 37, Zahn with 36, Thompson with 32 and DeMarrias 25. On the defensive end, Thompson had 65, Zahn 62, DeMarrias 44 and Keller 38.
Dishing the ball, Thompson led the Lady Tigers with 42 assists. Goehring had 25, Henderson 24, Keller 20, DeMarrias 19 and Nobles 20.
On the defensive end, the Lady Tigers slightly won the turnover battle, forcing 483 while committing 481.
Thompson led the team in steals with 37. She was followed by Goehring with 32, Henderson with 31, Nobles and Keller with 26 each and Feist with 20.
Zahn was the only Lady Tiger to reach double digits in blocked shots with 15 on the year.