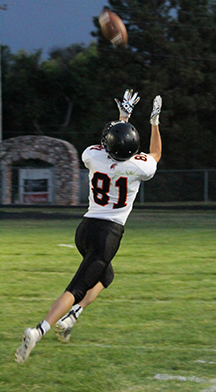 The Tigers used a change of strategy on defense and big plays on offense to beat Hot Springs 37-0 in Hot Springs on Friday.
Hot Springs, with a big size advantage, got the ball on the opening kickoff and used that asset to drive the ball down the field. The Bison drove from their own 35 to the Tigers’ 19 in 10 plays. The Tigers called a timeout and switched from their 4-4 defense to a five-man front. The move proved fruitful as the Tigers forced a Bison holding, an incomplete pass and a sack on the next three plays. Just like that, Hot Springs went from second and three at the 19 to punting.
“We told the kids they (Hot Springs) were going to be big and physical,” said coach Paul Goehring. “We made the adjustment and ended up stopping them. That was big.”
The Tigers, as they have done all season, took advantage when they got the ball back. Reese Cerney started it with a 30-yard punt return that ended with a facemask penalty, giving the Tigers excellent field position at the 48-yard line. Gavin Reinert ran for six and eight yards on the first two plays before Caden Halsey dropped back and hit Bryston Goehring for a 38-yard touchdown to give the Tigers a 7-0 lead.
“Halsey did a good job on that play,” said Goehring. “He stayed in the pocket and took the hit.”
Special team play came up big on the kickoff when Paul Mueller’s kick left Hot Springs starting from its own four-yard line. Three plays later, the Bison were punting again. This time a 20-yard return by Braden Goehring set the Tigers up 26 yards from the end zone. The Tigers got down to the 10 in the first quarter and on the first play of the second quarter scored when Halsey hit Braden Goehring near the sideline and the wide out juked his way into the end zone. Mueller’s extra point made it 14-0 with 11:54 on the clock.
Another quick Hot Springs possession gave the Tigers good field possession at their own 47. All 53 yards got covered quickly when Halsey saw Reese Cerney streaking down the sideline. Halsey launched a bomb that Cerney corralled and then fell into the end zone for the Tigers’ third touchdown, making it 21-0 with 8:29 left in the half.
Of the dynamic play, Goehring said, “A throw like that and a catch like that, you can’t stop it.”
The Tigers had the chance for two more touchdowns, but settled for three points the rest of the second quarter. The first drive stalled, but Mueller missed a 38-yard field goal attempt. The second drive ran out of time and Mueller drilled a 28-yard field goal with one second left in the half.
The Tigers started the second half looking for a long drive. It ended up a long play. After picking up one first down, the Tigers were facing third and seven at their own 30 when Halsey saw Cerney open and launched. Cerney came back to a short throw, made a man miss and sped the rest of the way to the end zone for a 70-yard touchdown.
Late in the third quarter, Hot Springs punted from deep in its own end zone. Braden Goehring caught the punt, weaved through some traffic and raced to the end zone for a 52-yard touchdown.
That score gave the Tigers a 37-0 lead. With the clock running the rest of the way, the backup Tigers took over and ran out the rest of the second half.
Halsey had a huge game in a game that almost wasn’t.
“He hadn’t practiced all week because he was sick,” said Goehring. “We made the decision that morning when he said he felt okay.”
Goehring said they were still playing it close to the vest. If Halsey wasn’t going to make it, they were ready to make a quarterback switch. All Halsey did in the game was complete nine of 13 pass for 277 yards and four touchdowns.
Cerney was the big on the other end of those passes with three catches for 163 yards and two scores.
Goehring was quick to say that it was not just the big offensive plays that gave the Tigers a dominating win. He noted that special teams were excellent all-around. While Hot Springs did a nice job taking away the jet sweep, the line and Gavin Reinert combined for several big runs up the middle to set the passing game up.
And that defense. After giving up 41 yards on the opening drive, the Tigers held the Bison to just 37 yards offense the rest of the game.
With the win, the Tigers are 4-0 at the regular season’s midway point. They are ranked high honorable mention by both the media and coaches polls. The media has the Tigers ranked sixth and the coaches have them seventh.

Sisseton
The Tigers face a tough road test this Friday when they head to Sisseton to square off against the 4-1 Redmen.
“Sisseton has a new coach and a lot of players who didn’t come out last year,” said Goehring. “Plus, they have their whole team from last year back.”
The Redmen are feeling confident just like the Tigers and are coming off two straight road wins. They beat Groton Area 20-12 in Groton and then used a 24-point fourth quarter to pull off a 34-30 over Roncalli in Aberdeen on Friday.
The Tigers are fifth in 11B seed points while the Redmen are 11th.
“This is a big game for us as far as the playoff picture,” said Goehring.
He said Sisseton runs two types of offense. They line up in the double wing and sometimes run a spread offense.
When it comes to the Tigers dealing with the Redmen, Goehring said, “On defense we’re going to have to adjust to what they do.”
As for Sisseton having to deal with the big play Tigers, “I’m looking forward, with the speed we have, to watch them play on artificial turf.”
This is the 21st meeting between the Tigers and the Redmen. Although the Tigers have won two straight, including a 43-6 win in Mobridge last year, Sisseton holds a 15-5 record in the all-time series.