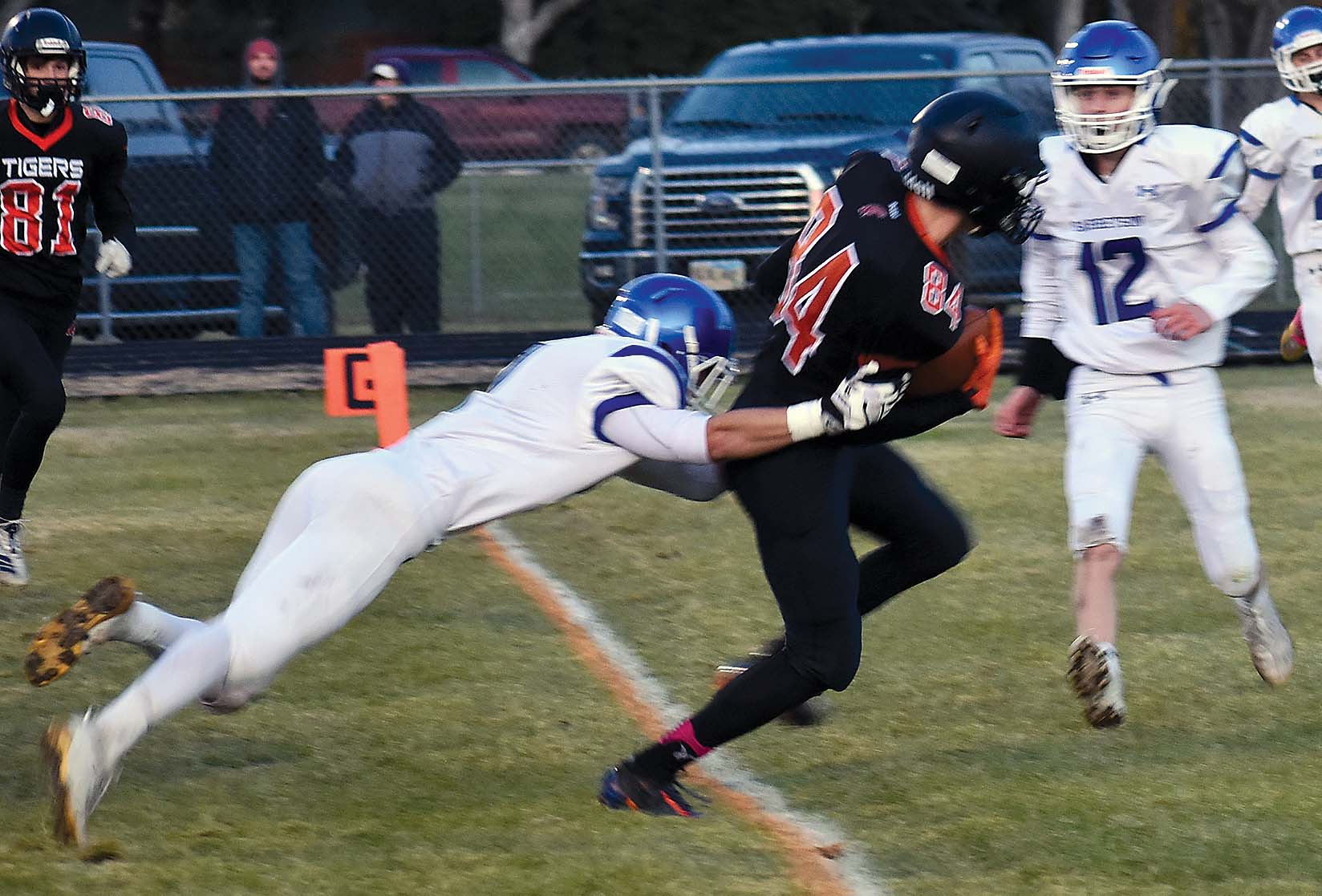 The Tigers used a dominating first half to post a 40-15 win over Garretson in the opening round of the Class 11B playoffs at Tiger Stadium on Thursday.
“When we needed big plays, we got big plays,” said coach Paul Goehring. “The kids really had their timing clicking on offense. The line did a really good job with pass protections. On defense our overall aggressiveness, it seems like we always had people where they needed to be.”
Winning on both sides of the ball, the Tigers built a 27-0 lead before Garretson had any success.
Garretson did pick up one first down on the game’s opening possession, but the Tigers stopped the Blue Dragons four plays later when on fourth and four from the 46-yard line, Cayden Eisemann stuffed Dominic Abraham after a one-yard gain.
The Tigers, as they have done all season, struck quickly. On the third play, quarterback Caden Halsey hit Braden Goehring for a 12-yard gain to give the Tigers a first down on the 31-yard line. On the next play, Reese Cerney took a jet sweep and followed a convoy of blockers untouched and into the end zone. Paul Mueller’s extra point gave the Tigers a 7-0 at the 7:37 mark of the first quarter.
Jacob Steiger forced a fumble that Gabe Jerome recovered on the ensuing kickoff, but Garretson held at the three and took the ball back.
The Blue Dragons did not have the ball for long. A three-and-out forced a punt. Braden Goehring returned the kick all the way back to the 20 and was hit out of bounds. The late hit gave the Tigers the ball just 10 yards from pay dirt.
That 10 yards was eaten up quickly when Halsey hit Trace Cerney with a swing pass that the fullback took into the corner of the end zone, to make the score 13-0 with 4:46 left in the first quarter.
Both defenses held on the next possessions. It was the Tigers’ punt that set up the next scoring opportunity. Facing fourth down at the 44, Halsey booted a perfect punt that fell dead at the three-yard-line. Garretson gained one first down, but an eight-yard punt followed that gave the Tigers the ball at the 28-yard line.
A Trace Cerney 14-yard run took the ball halfway to the goal. The last 13 came when Halsey hit Bryston Goehring on a slant that put the third touchdown on the board, giving the Tigers a 20-0 lead with 8:30 left in the half.
The next possession started at the 30-yard-line. A four-play drive happened quickly. On the second play, Halsey hit Bryston Goehring for 34 yards and on the third hit Reese Cerney for 33 yards and a touchdown. The quick drive made the score 27-0 with 5:24 on the second quarter clock.
While building the four-touchdown lead, the Tigers had 180 yards of offense, while the defense held Garretson to 42 yards and two first downs.
The Blue Dragons, however, were not ready to close up shop. Their next possession was a 13-play, 84-yard drive that culminated with Abraham finding the end zone on an 11-yard run.

The touchdown came with 31 seconds left in the half. After the kickoff, the Tigers were on their own 26 with just 24 seconds left. What happened next put the game away. After an incompletion, the Tigers got tricky. Things looked simple enough at the snap when Halsey handed off to Reese Cerney, but Cerney gave it to Braden Goehring who gave it back to Halsey who sent a bomb to Bryston Goehring, who caught the ball at the 35 and tore downfield before being forced out of bounds at the eight yard line with six seconds left. One play later, the Tigers were in the end zone after Halsey and Reese Cerney teamed for a touchdown pass with one second left in the half.
“I asked the kids before the game if they thought we should run the double reverse pass,” said Goehring. “They said let’s do it.”
The Tigers put any thoughts of a comeback out of Garretson’s collective mind with their second possession of the third quarter. Taking the ball at their own 23 on a Reese Cerney interception, the Tigers went on a 17-play, 77-yard drive that did not end until Trace Cerney scored on a one-yard plunge the first play of the fourth quarter.
Garretson went on to add a touchdown late, but it was long after the Tiger starters had left the field.
Halsey had another huge day for the Tigers he was 11 of 17 passing for 241 yards and four touchdowns. Three different receivers caught touchdowns and five different receivers caught passes.
Goehring said he really liked the success the Tigers had throwing slants, and of course, the success of the trick play.”
“That was awesome,” said Goehring. “We haven’t really had a lot of reps with those. It’s good to know these kids can execute plays we haven’t worked on all week.”
Reese Cerney finished with four catches for 68 yards and two touchdowns and his rushing touchdowns. Bryston Goehring caught three passes for 113 yards and a score. Trace Cerney had a touchdown on the ground and another through the air, while gaining a combined 58 yards.
“We’re doing a really good job of spreading the ball out,” said Goehring.
The Tiger defense spread the wealth around, too, as a number of players made big plays. Leading the way were Trace Cerney with 10.5 tackles, Hudson Filler with six tackles and Kregen Norder and Eisemann with 5.5 tackles each
Norder and Eisemann were especially effective in the first half when Norder had two big tackles for loss and Eisemann had 4.5 tackles.
“Eisemann and Trace are playing exceptional linebacker,” said Goehring. “Kregen has developed into an outstanding defensive end.”

Quarterfinals
The 8-1 Tigers host the 8-1 McCook Central/Montrose Fighting Cougars on Thursday at 7 p.m. in the Class 11B quarterfinals.
The Cougars’ season looks much like the Tigers’. The Tigers only loss came against undefeated Webster Area. The Cougars’ only loss came against undefeated Bridgewater-Emery/Ethan.
McCook Central/Montrose has a big line that they like to take advantage of.
“They’re big up front, physical,” said Goehring, “and they have a couple bruising running backs. They show double wing, but will spread it out and open it up, but their strong point is running the ball.”
Goehring said his team is ready for the challenge. His Tigers are meeting important criteria in high school football, they are still getting better every week.
“At a perfect time,” said Goehring