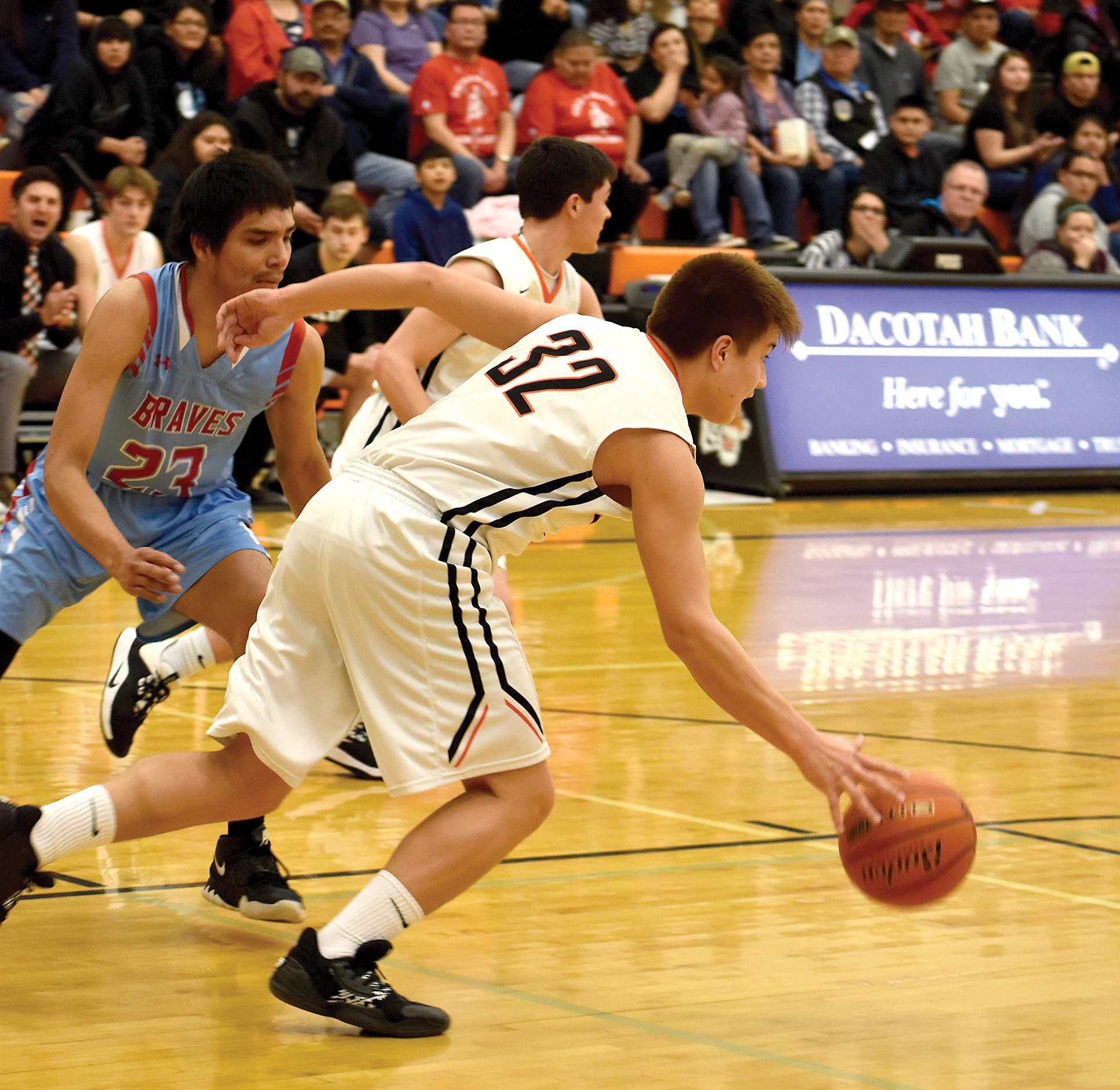 The Tigers rallied from six points down early in the fourth quarter to defeat Cheyenne-Eagle Butte 58-50 in the Region 6A semifinals at Mobridge-Pollock High School Gymnasium on Friday.
“That was exciting,” said coach TJ Knudson. “When we got down to the fourth quarter it was really fun.”
The Braves held 42-40 lead at the end of third quarter and increased their lead to 46-40 when Marty Ross and Nevyn Mendoza scored back-to-back baskets to start the fourth quarter. Undaunted, the Tigers started their comeback. Reese Cerney cut the Cheyenne-Eagle Butte lead to one point with a two and a three. Caden Halsey gave the Tigers a 48-46 lead with 3:29 left with his sixth three-pointer of the game. Caden Eisemann hit a three to make it 51-46 with 2:52 remaining before Halsey capped the 13-0 run, hitting an inside shot to give the Tigers a seven-point 53-46 with 2:10 left in the game.
“The key was recognizing the Braves were trapping when we went right but not when we went left,” said Knudson. “We knew we could get the shots we needed on the left side.”
The Braves ended the Tiger run with a pair of Riley Hodgkiss free throws at the two-minute mark, but the Tigers hit five free throws down the stretch while holding the Braves scoreless until there were just 12 seconds left.
Knudson said it was the kind of win that validates all the hard work his players put in.
“They do work hard,” said Knudson, “and it’s not just at basketball. They work hard at their other sports, at their schoolwork, at everything they do.”
He added that the physical and mental preparation was a huge part of their second half success, especially after the Braves outscored them 15-3 in the third quarter after the Tigers had built a 37-27 halftime lead.
“At halftime, they knew it,” said Knudson. “They knew they were going to have to put the pedal to the metal. Early in the season we had some games where we didn’t finish the way we do now. We’re not afraid of anything anymore.”
Halsey led the Tigers with a game-high 26 points, hitting six three-pointers. He also shared the team lead with five rebounds and made one of the defensive plays of the game when he stopped a ball from going out of bounds and caromed it off a Cheyenne-Eagle Butte player to force a turnover with just over a minute left.
“The biggest key to winning the game was Halsey,” said Knudson. “I gave him the game ball and told him to take it home and put it up in his room to keep forever.”
Cerney came up big when his team needed him most, scoring six of his eight points in the fourth quarter. Braden Goehring sparked a 12-2 Tiger run late in the first quarter with nine of his 11 points. Eisemann hit a pair of threes for six points. Bryston Goehring scored five points, grabbed five rebounds and dished five assists. Zane Reinert scored just two points, but those two came on free throws down the stretch. Kregen Norder did not score, but shared assist honors with Bryston Goehring and Reinert.