Tigers raise record to 4-0 with win over Ellendale 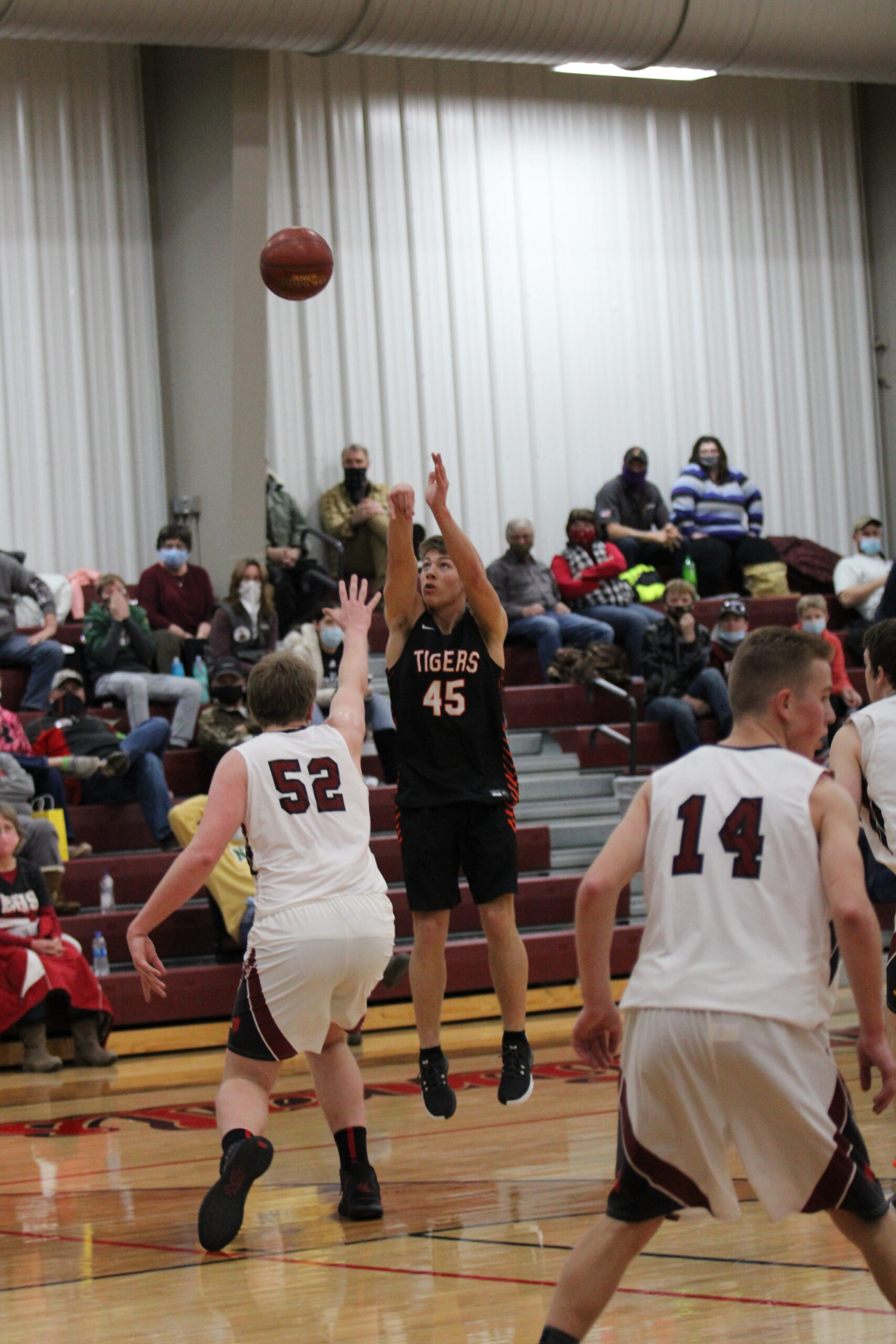 Ashton Pfitzer’s three-pointer gave the Tigers a 48-36 lead during the third quarter in Ellendale, North Dakota, on Tuesday. The Tigers went on to in the game 61-50.

The Tigers used timely runs and staunch defense to defeat Ellendale 61-50 in Ellendale, North Dakota, on Tuesday and run their early season record to 4-0.
The Tigers forced two turnovers and scored three baskets while building an early 7-0 run. With 6’7” Scott Wagner leading his team, Ellendale climbed back to within 11-9 by the end of the quarter.
A 10-2 run midway through the second quarter gave the Tigers a 26-21 halftime lead.
Bryston Goehring and Ashton Pfitzer combined for four points to end the third quarter and give the Tigers a 42-34 lead.
Starting the fourth quarter with an 11-3 run boosted the Tiger lead to 53-37, but Ellendale was not done. The Cardinals answered with 10 straight points to cut the deficit to 53-46 before Zane Reinert scored to end the run.
The lead was down to 55-50 with a half a minute left when Bryston Goehring hit two free throws. The Tigers then forced two straight turnovers, resulting in a Zane Reinert field goal and two Braden Goehring free throws as the Tigers pulled away for the win.
“Tonight was a great learning experience for our team,” said coach TJ Knudson. “Scott Wagner played ‘big’ for the Cardinals. He made us adjust defensively throughout the game. Caelan McCollam played quality minutes defending Wagner. With Caelan defending down low, combined with our full court man defense, we were able to get some easy layups.”
As for the offense, Bryston Goehring led the way with 21 points and seven rebounds. He was nine of 10 from the free throw line. Zane Reinert led the team with seven baskets and scored 17 points. Braden Goehring hit all four of his free throws and scored eight points. Pfitzer chipped in with six points.
“Bryston Goehring had a big defensive and offensive performance,” said Knutson. “Zane Reinert’s seven field goals all seemed to come at the right time to break any momentum they had built.”
Wagner did his part for Ellendale with game-leading totals of 29 points and 12 rebounds, but the rest of the team was held down, hitting just seven field goals. Eric Blondo and Levi Reis followed with Wagner with six points each.
Knutson said the effects of the Tigers’ staunch defense provided not just the easy layups, but points from the free throw line.
“Twenty-one turnovers and 17 of 22 from the free throw line really helped secure the 11-point win.”

Streaks to stop
The Tigers have home games on Saturday and Tuesday. Sully Buttes is here Saturday for doubleheader action before Potter County comes to town on Tuesday.
In the Saturday doubleheader, the Tigers will tip off sometime between 5 and 5:30 p.m. The day’s action starts at 1 p.m. with two JV games. The Lady Tigers are set for a 3:30 p.m. start.
Both the Chargers and Battlers beat the Tigers in one-point games last year and both teams are on five-game winning streaks in the respective series.
The Tigers and Chargers are playing for the 68th time and the 17th straight season. The Tigers won the first game 33-21 during the 1933-34 season. The Tigers lead the all-time series 42-25, but the Chargers have won five straight, including the Chargers’ 54-53 win last year on a pair of last-second free throws.
The Tigers and Battlers are meeting for the 100th time since Gettysburg beat Mobridge 15-5 during the 1925-26 season. While the Tigers have big 64-35 lead in the all-time series, the Battlers are on a five-game winning streak. A late three-pointer gave the Battlers a 71-70 win in Gettysburg last year.