Tigers take down rival Mustangs with second half run 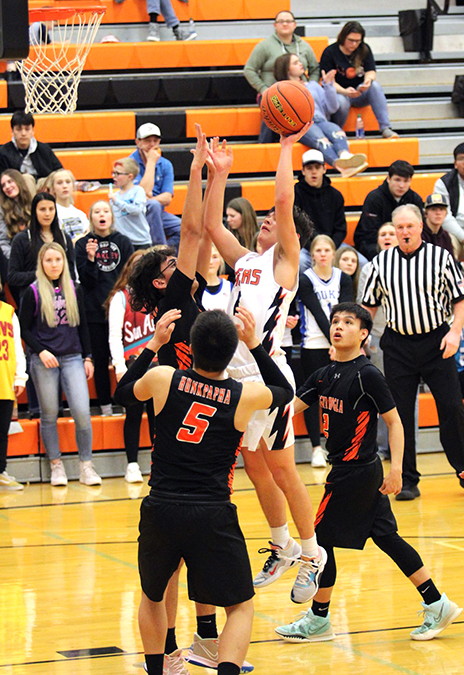 Jackson Eisemann goes up for two of his 13 points during the 166th meeting between the Tigers and McLaughlin at Mobridge-Pollock High School Gymnasium on Monday. The Tigers beat the Mustangs 61-53.

The Tigers went on a 24-8 run in the third and fourth quarters to come away with a 61-53 win over rival McLaughlin at Mobridge-Pollock High School Gymnasium on Monday.
“Good team win,” said coach TJ Knudson. “We used a quote from Jeff Gundy before the game. ‘If you’re into winning, you’re into sacrifice and sharing.’ It is obvious that players are totally feeling additional energy from teammates playing unselfishly.”
The visiting Mustangs had the upper hand early and led 12-8 after one quarter.
The Tigers made their move with a 14-2 run to start the second quarter. They built the lead to 30-22 before Elias Sims hit a three to cut the Tiger lead to 30-25 at the half.
Knudson said the second quarter defensive effort set the stage for the game. Jackson Eisemann scored eight points and Ashton Pfitzer seven in the quarter.
“We like to press at certain times throughout the game,” said Knudson. “Our players right now are reacting quickly when we decide to jump other teams.”
The Mustangs cut the Tiger lead to one point at 33-32 early in the third quarter when the Tigers broke the game open with a 27-11 run that took the score to 60-43 with less than two minutes left in the fourth quarter. Instrumental in the run were three three-pointers and 13 points from Pfitzer and two third-quarter three-pointers from Trent Schmeichel.
“That run is what you need to win a rivalry game,” said Knudson. “We have a variety of players right now who are reading defensive alignments very well while they are executing a play. Everyone is buying into seeing all five defenders and passing the ball to the most open guy.”
The Mustangs did not stop coming and hit three straight three-pointers during a run that cut the Tiger lead to 60-53 with 38 seconds left, but it was too little too late and the Tigers held on for the eight-point win.
Pfitzer had the best game of his career with a 20-point, 16-rebound, double-double and hit four three-pointers. Eisemann finished with 13 points, while Schmeichel and Brady Bauer added nine points each. Thane Beheler had a big game off the bench with seven points and nine rebounds.
“Ashton and Thane are playing great,” said Knudson. “They both seem to have figured out how to have a balance of aggressive game play and finesse.”
Sims and Jre Antelope combined to score all but 10 of the Mustangs’ points. Sims scored a game-high 23 points. Antelope followed with 20. The duo combined for nine three-pointers, including five in the fourth quarter. Levyn White Bull added six points and six rebounds.

Todd County
The Tigers built an 11-point lead after three quarters and then held off a late Falcon comeback attempt in a 69-65 win over Todd County in Mission on Saturday.
“We always love to go down to Todd County and play in Ben Reifel Auditorium,” said Knudson.”
After falling behind early, the Tigers finished the first quarter on an 8-0 run to open a 17-12 lead.
Jackson Eisemann scored five straight points to give the Tigers an early 22-14 lead in the second quarter. The Falcons fought back to get within 29-28 before Trent Schmeichel and Ashton Pfitzer scored to give the Tigers a 33-28 halftime lead.
With the Tigers leading 44-27 midway through the third quarter, Schmeichel went on a tear with 10 straight Tiger points, lifting the lead to 54-43 with eight minutes to play.
The Tigers still led by 11 points with four minutes to play, but the Falcons starting chipping away. A three and a two by Ray Crow and a three-point play by Charles Long cut the Tiger lead to 67-63 with 10 seconds left. Stephan Guerue hit a quick shot to cut the lead to 67-65 with 6.0 seconds left. With 5.9 seconds left, the Falcons fouled Eisemann who stepped to the line and swished two free throws to nail down the Tiger win.
“Jackson has done a nice job of shooting free throws this year,” said Knudson. “He has put in lots of time practicing free throws in the off season and it shows.”
Knudson added that while the final minutes were played as well as he would have liked, the Tigers did what was needed to win a game on the road.
“We haven’t been happy with how we have finished games lately,” said Knudson, “but we are improving. We will continue to improve in finishing games, mainly because we have leaders right now who demonstrate their willingness to practice end of game situations. Practice is when we can do something to improve and it’s fun to coach such a great group of young men.”
Schmeichel used his 10-point third quarter to lead the Tigers with 17 points.
“Trent played a great game,” said Knudson. “He showed leadership on both sides of the ball. He has been increasing confidence and athleticism each game this season.”
Eisemann finished with 14 points. Ashton Pfitzer scored 13 points and grabbed seven rebounds, while Caelan McCollam scored nine points and grabbed eight rebounds.
Long led Todd County with a game-high 18 points. Sayge Yellow Eagle scored 10 points. Terrance Eastman scored nine points and grabbed nine boards.

Road run
The Tigers hit the highways for three road games this week. They square off at 5-8 Sully Buttes on Thursday, 11-2 Groton Area on Saturday and 7-7 Sisseton on Monday.
The Tigers and Chargers are playing for the 69th time in a series that dates back 87 years to the 1933-34 season. The Tigers have built a 43-25 record against the Chargers. The Tigers’ 50-47 home win last year broke a five-game Charger winning streak.
The black and orange Tigers would like to put an end to a long streak that has been happening with the black and gold Tigers. The 24th meeting between the Tigers and Groton Area comes when the home team has won 14 straight games in the series. With a 53-51 win last year in Mobridge, the Tigers hold a 13-10 lead in the series. The last Tiger win in Groton came in 2006.
The Tigers and Redmen first met in the 1950 state tournament when Sisseton won a 65-55 game. As the teams gets set for their 47th meeting, Sisseton holds a 30-16 edge, but the Tigers have won three in a row, including a 46-38 win in Mobridge last season.