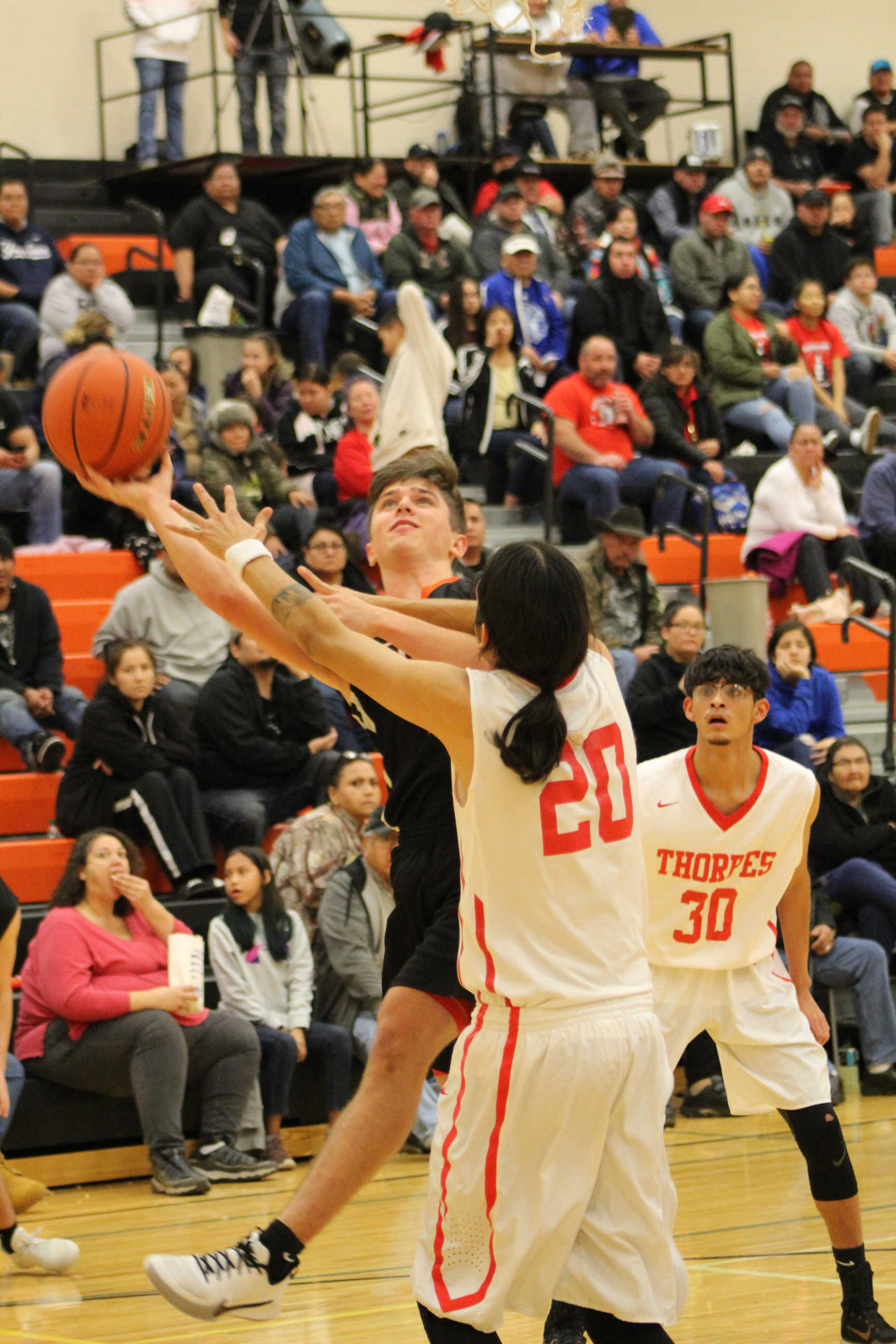 The Tigers learned more about themselves and their ability to come up big at the end with a 55-53 overtime win over Pine Ridge at the Hunkpapha Classic in McLaughlin on Friday.
In game that was nip and tuck from beginning to end, the Tigers scored the last four points of regulation to set up overtime, and then started the extra session with a 6-0 run to set up the win.
“Our kids had more left,” said coach TJ Knudson. “They just got down to business there late. The kids executed at the end.”
The two teams played back and forth without ever getting momentum or much of a lead. Pine Ridge took an 11-5 lead midway through first quarter only to have the Tigers score six straight points to tie the game. The six-point Thorpes lead was the biggest lead of regulation.
What the Tigers did was hang close. They did not have the lead in the first half. They trailed 28-23 until Zane Reinert hit a three-pointer to make the halftime score 28-26.
The third quarter was a lot of the same thing. Pine Ridge led 35-30 until Kregen Norder, Trace Cerney and Reinert combined for three straight baskets, the third gave the Tigers their first lead of the night at 36-35. But Pine Ridge came right back with a Charles Pacer three-pointer to take a 38-36 lead heading into the fourth quarter.
Trailing 41-38, the Tigers got baskets from Norder, Reese Cerney and Caden Halsey to take a 44-41 lead, only to have Pine Ridge answer with seven points to take a 48-44 lead. The Tigers chipped away. After Reese Cerney hit one of two free throws, Bryston Goehring tipped his own missed shot into the hoop to make it 48-47 with 1:20 to play. The Tiger defense forced a turnover and Reese Cerney hit the front end of two free throws to tie the game at 48-48 with 23.1 seconds left. Pine Ridge would not be allowed to try a game-winning shot as Bryston Goehring came up with a steal in the waning seconds.
The Tigers took over in overtime. Trace Cerney got open inside to give the Tigers a 50-48 lead. Then Reese Cerney hit two straight baskets to make the score 54-48 with 1:25 to play. At the other end of the court, the Tigers forced a missed shot and three turnovers on Pine Ridge’s first four possessions.
The game got close again down the stretch as Pine Ridge hit a two and a three, while the Tigers were going one-for-four from the free throw line. Pine Ridge had one last chance, but the Tigers forced a traveling call on Pine Ridge and then simply got the ball inbounds to end the game.
The Tigers forced seven turnovers on the last 10 Thorpe possessions of the game.
Knudson said that was the effect of the constant ball pressure the Tigers put on the entire game.
“The kids were flying around and anticipating,” said Knudson. “You could tell by the end they were just sick of us guarding them.”
Reese Cerney led the Tigers with 13 points, including eight in the fourth quarter and overtime. He added five assists and five rebounds.
“Reese did a good job in the overtime,” said Knudson.
The deep Tigers got contributions up and down the lineup. Norder scored 11 points and grabbed five boards. Halsey and Zane Reinert scored eight points each. While scoring just two points, Bryston Goehring led the team with six rebounds and three steals. Trace Cerney added four points, three assists and two steals. Cayden Eisemann hit a three and dished four assists. Braden Goehring scored four points and Gavin Reinert scored two.
While the Tigers were outrebounded 39-30 by the taller Thorpes, the rebounding was split evenly over the last 12 minutes.
The place the Tigers struggled was once again at the free throw line where they hit just seven of 19 shots.
“It’s terrible. We’re below 50 percent,” said Knudson. “Obviously, we have to get better. We’re going to do some things to build their confidence.”

Road Games
The Tigers take to the road to play Sully Buttes in Onida on Saturday and Potter County in Gettysburg on Tuesday.
Mobridge-Pollock and Sully Buttes are playing for 67th time in a series that began with a 33-21 Mobridge win during the 1933-34 season. Since then the Tigers have built a 42-24 lead over the Chargers, but the Chargers have won the last four including a 56-49 win in Mobridge last season.
Mobridge-Pollock and Potter County are meeting for the 99th time in a series that started way back during the 1925-26 campaign when Gettysburg beat Mobridge 15-5.
The Tigers are 64-34 all-time against the Battlers, but like Sully Buttes, Potter County has beaten Mobridge-Pollock four years in row. The Battlers beat the Tigers 64-56 last year in Mobridge.
Upon learning the Tigers are facing two team that have four-game winning streaks against the Tigers, Knudson said, “It’s time to change that.”