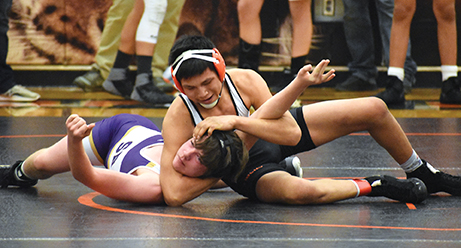 Mark Sandquist puts Isaac Ramirez in a predicament before pinning the Sully Buttes wrestler during the Mobridge-Pollock Round Robin on Tuesday. Sandquist went on to take first place at 145 pounds.

The Tigers had a strong night at Mobridge-Pollock Round Robin on Tuesday, claiming four weight division titles.
Taking first place were Wyatt Wientjes at 138, Mark Sandquist at 145, Jesse Bearsheart at 182 and Aiden Schoenhard at 220.
Wientjes took first place by pinning teammate Brayden Wientjes at 3:05 and Gunnar Knittal of Ipswich/Bowdle in 47 seconds.
Sandquist, wrestling 145 for the first time, had no problems, pinning a pair of Sully Buttes wrestlers. He pinned Ely Heuertz at 3:15 and Isaac Ramirez at 2:15.
Bearsheart, in a two-man division, defeated Justin Rohrbach of Ipswich/Bowdle 6-3 and 12-2.
Schoenhard only had to wrestle once at 220. He pinned Quentin White Mountain at 1:01 and received a forfeit from Kadyn Weisser of Ipswich/Bowdle. Schoenhard’s much anticipated 1-2 match with Grey Gilbert did not happen because Harding County did not show up at the tournament. Schoenhard is ranked first in Class B and Gilbert is ranked second.
Remmington Ford took second at 152. Ford pinned Carson Schrempp of McLaughlin in 43 seconds but was pinned by Lucas Yellowhawk of Sully Buttes at 1:48.
In the nights’ only four-man division, Riley Kerner took second and Axton Gates third at 285. Kerner beat Gates 2-1 and had a 54-second pin over Liam McCartney of Lemmon/McIntosh. Gates beat McCartney 1-0. Both heavyweights were pinned by sixth-ranked Lucas Rowland of Ipswich/Bowdle.