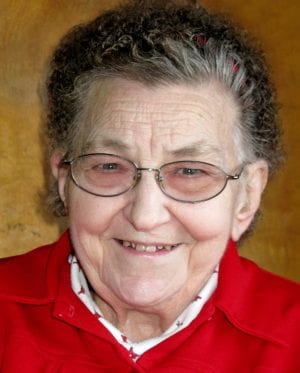 Funeral services for Vivian LaVonne Neumiller, 84, of Mobridge, were held Saturday, Sept. 16, 2017, at Zion Lutheran Church.
Interment was in Java East Cemetery under the direction of Kesling Funeral Home of Mobridge.
Vivian passed away on Friday, Sept. 1, 2017, at Selby Good Samaritan Center.
Vivian was born on March 28, 1933, to William and Emma (Schaubert) Neumiller in Bowden, N.D. She attended Bowden Public School, and at the age of 16, went to work for a doctor in Woodworth, N.D., taking care of his house and cooking meals.
She returned home to Bowden and met Wilmer Neumiller in 1954, while Wilmer and his brother Emil owned and operated a Conoco station in Bowden. Vivian and Wilmer, along with her parents, spent time in Bremerton, Wash., where both her dad and Wilmer worked in the shipyards. On Oct. 5, 1956, Vivian and Wilmer were married in Bowden by Reverend Robert Schlinkert. They lived a short time in Java, where Wilmer farmed with his brother Ruben. Then they moved to Gettysburg, where Wilmer was employed by Case Implement as a diesel mechanic. In June of 1957, Vivian gave birth to their first child, a daughter, who unfortunately was born premature and lived only a few weeks. In August of 1959, son Billy was born. The family moved to Mobridge in 1960, where Wilmer worked construction for Holzworth Bros., and later with Missouri Basin Builders. Vivian and Wilmer planned to grow their family, but Vivian had difficulty carrying her pregnancies full term. Vivian did daycare as a way to stay busy and extend her love for children.
Vivian and Wilmer looked into adopting as a way of grow their family, but were unsuccessful due to age limits at the time. Eventually they became foster parents and opened their home to more than 100 children for the next 30-plus years. Some stayed only a few days, while others stayed months. They raised one foster son, Joseph, for 16 years. Vivian stayed in touch with as many of her foster kids as much as possible, always remembering their birthdays and making sure they got a Christmas gift from her and Wilmer. After that, Vivian started a cottage business in her kitchen making mints and fruitcakes. She collected hundreds of molds and flavors and offered just about anything you could imagine. She was well-known for her fruitcakes and zucchini bread and was featured twice as Cook of the Week in the Mobridge Tribune.
All of her life, Vivian was a letter writer. She wrote hundreds each year as a way to stay in touch with her family and friends – her version of social media – as well as talking on the phone. It wasn’t unusual to get a “busy signal” when trying to call her. She was a family historian, consistently keeping track of births and deaths as well as where people lived as younger generations started to spread out around the country. Vivian enjoyed her close friends, often sharing a meal out once or twice a week, or attending a polka dance. To pass time in her later years, she took to solving puzzle books, spending hours at a time at her kitchen table. Vivian was a member of Zion Lutheran Church and enjoyed attending when she was still driving. After that, she enjoyed pastoral visits, most recently from Pastor Laude of Zion.
After a recent stay and rehabilitation, Vivian passed away in her sleep at Good Samaritan Center in Selby.
She was preceded in death by her parents, one daughter, LaVonne, and her husband, Wilmer.
Vivian is survived by one son, Billy, and his fiancée Nancy Mack, of Minnetonka, Minn.; five grandchildren, Brad, Brian, Robert, Andrew and Svetlana; and five great-grandchildren.