2020 county budget may not have been legally adopted

Tiger Booster club to host Trunk or Treat before game

The Mobridge-Pollock Tiger Booster Club will be hosting a Trunk or Treat event on Thursday, Oct. 31, in the parking lot east of Mobridge Regional Hospital and Clinics on 10th Avenue West. With the Mobridge-Pollock Tiger football playoff game with McCook Central-Montrose being played at Tiger Stadium beginning at 6 p.m., the Booster Club is inviting Mobridge businesses to host […]

Steiger to be recognized for lifelong rodeo work 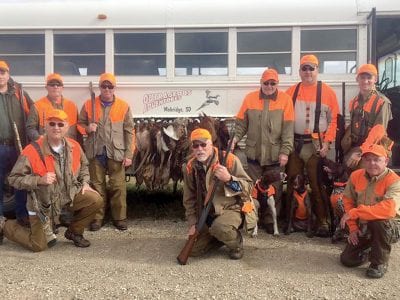 Numbers are down but hunters find pheasants in Mobridge area

Poor conditions related to weather and the fact that crops are still in the fields, combined to make the opening weekend of South Dakota’s pheasant hunting season “tough” for hunters, according to one Mobridge-area guide. There are plenty of birds out there, but the surrounding crops made them tough to get to, said Kerry Konold, owner and guide with Outrageous […]

A man who recently moved to Mobridge has been arrested on multiple charges in both North and South Dakota, including assaulting an officer. Bill Dean Brown, Jr., 19, was involved in an assault Sunday, Oct. 20, which led to his arrest and an incident at the Mobridge law Enforcement Center that included an attack on an officer inside the building. […]